So this round we're talking about album artwork, and more specifically, records which we personally have a soft spot for, but which also happen to have terrible artwork. My gut reaction is to begin my thoughts on this topic by acknowledging my fellow Sorry State bloggers' choices for "bad artwork". When looking at some of the record covers that have been discussed, I thought some of the art my colleagues criticized wasn't all that bad! And sure, some choices were not the most exemplary, and at the end of the day your favor towards certain artwork is all a matter of taste. Still, I find myself approaching this topic wanting to talk about bands that I think musically are killer, but whose artwork not only misrepresents the sonic aesthetic of the band but also leaves me thinking: "What the hell were they thinking?"

When I think about record covers that I am artistically attracted to, I think typically I lean toward imagery that's more stark and austere. A lot of artwork I like also tends to be either be black and white or have a limited color palette. One of my favorite record covers is the first Killing Joke album. Fairly simple, I believe it's a photograph that's been tampered with to incorporate the band name. With the former criteria in mind, the contrary to this aesthetic usually involves bright colors, cartoony or graphic illustrations and busy, corny design ideas. Many of these elements at first glance are red flags, and can be turn-offs for me when judging artwork or the band adorning said artwork. As much as I like some metal, a lot of goofy lookin' thrash records (I won't name names) come to mind when describing the type of album artwork I think looks lame.


So what am I trying to get at here? Case and point: I really think Herätys really missed the mark on their artwork. Let me make myself clear, I think Herätys is a killer band. If you'll allow me to gush here a bit, I think that during the time they existed as a band from the late '00s until around 2013 or so, they reintroduced a style of Swedish hardcore that few who attempted to imitate did nearly as well. When looking at bands like Stress SS and also Institution and Katastrof (which feature Poffen from Totalitär), the former members of Herätys's current projects further illustrate their commitment to pumping out pure mängel fury.

I remember the first time I heard Herätys, I thought to myself that they would instantly become a contemporary favorite. But then I saw the artwork... I'm not sure who approved the idea to depict all the members of the band as zombies on the front cover, but I feel like the first LP's cover art is more reminiscent of a Misfits-inspired skate rock band than a ripping, classic Swedish sounding hardcore band. I guess the counter-argument against this stance is that at least the artwork isn't another overly contrasted photo of graphic war imagery with Crass font. I like Discharge as much as the next punk, but there was an era where the crust pool was way overflooded with this visual signature. 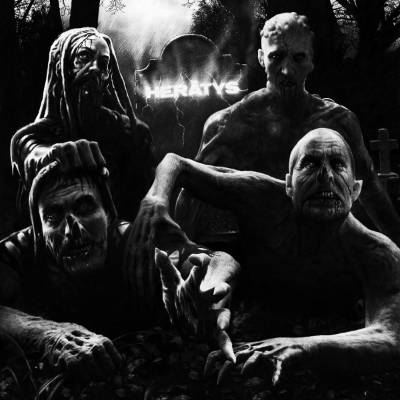 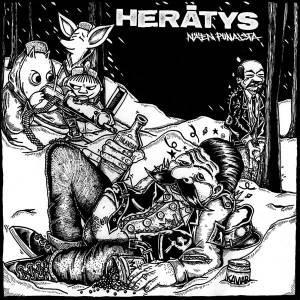 I remember being stoked for the long-awaited follow up to the debut 12", an EP titled Helvettiin Ja Takaisin. And one might think Herätys would remedy the artwork direction from the first record, and they did... well, sort of. Being the fan that I was at the time, I ordered the Euro press of the 7" direct from the label overseas. As you can see from the gif above, the limited version of the Euro press came with bonus artwork! The focal point of the more common cover art for Helvettiin Ja Takaisin depicts a figure walking through wilderness with a TV for a head (WHAT?). Now, one might be inclined to argue that at least they attempted something more abstract, but I think that would be giving them too much credit because this cover art is really just kinda puzzling and unmemorable. And while additional artwork did disguise the actual cover art, the bonus art took things in an even more silly and cartoony direction. The illustration depicts what looks like a giant drunk punk Satan standing over Hitler and some other weirdos in Hell while eating hotdogs. Don't know what happened there.

And then the cherry on top: rather than abstaining from the cartoony design of the bonus cover from the former release, Heräys's final 7" Näen Punaista totally indulges in the silly imagery and may be their worst record cover to date. Sticking with the dictator theme, this final cover depicts what looks like Stalin drunk in the snow, along with all of the animals of the Scandivanian Winter Wonderland and of course -- a guy with his dick out. If I didn't know anything about Herätys and saw this artwork, I would probably jump to the conclusion that they were a shitty grindcore band that sang about pizza.

So here's what I find so irritating: Because I have such a fondness for Herätys and I think of them as an important band, both to me personally and because of what they brought to the hardcore scene at the time, I wish they had artwork that reflected their integrity. I'm not saying the band should take themselves too seriously, but I would prefer if one of my favorite bands weren't artistically represented by such a cheesy visual legacy. But hey, I'll still throw these records on and think they rip, they totally hold up. I'll just begrudgingly shake my head at the covers until I remove the wax.
Alright, now let's talk about some other records that out since my last post. Some of these have pretty decent artwork:

The Dark: Demons 7" - Debut vinyl release from this LA-based punk band. If you read Daniel's excellent Record of the Week review of this EP, you'll understand the shop's fondness for The Dark's classy interpretation classic Japanese punk. I really liked The Dark's two previous cassettes and thought beyond their chugga-chugga riffs and snarling vocals, they also were good at creating a creepy atmosphere that matches their aesthetic. Don't sleep on this!

Fried Egg: Beat Session Vol. 4 CS - New batch of recordings from this VA punk band. I feel like all of these Beat Session recordings tend to bring out the best in the bands they put out releases by, and the same is true of Fried Egg. I'm not sure if they recorded this live, but this recording really does them justice with so much power and energy. Also, a sick Mecht Mensch cover to boot! Grab this hot reel.

Exploatör: S/T 12" - I feel like my roster of new releases wouldn't be complete without mentioning the latest from Poffen and company! Even after hearing Poffen's bands like Institution or Katastrof, Exploatör is sort of a return to form by reuniting most of the classic Totalitär line-up. The guitar sound and pulse of the drums is immediately recognizable and refreshing to hear. For real rage-a-holics only.

Hot Snakes: Jericho Sirens 12" - So most of the time, when I hear bands are getting back together to make a new record, I automatically expect it to be bad. And I'm not sure whether it's just the level of musicianship by the people involved or if Mr. Froberg's groups have such a signature style that making new music just comes naturally, but on Jericho Sirens, Hot Snakes do not sound like a band phoning it in. It's as if they never stopped! If anything, I think this new record is better than a couple of the others. While Vincent may not be a fan of the artwork, do yourself a favor and don't pass up on another killer Hot Snakes record.

Profoss: S/T 7" - Two D-beat bands in one blog post? Sure, why not! Debut vinyl release from Profoss, a Swedish band featuring members of Infernöh and, weirdly enough, Terrible Feelings. Profoss is another band that synthesize the best aspects of their predecessors and unapologetically crank out tunes in the best of Swedish punk traditions. Total fist-pumper all the way through. Get this before they're gone!
Here's some upcoming punk shows in NC, slightly updated from last time:

Once again, I'll try to re-update next blog!

I think that'll do for this round. As always, thanks for reading!