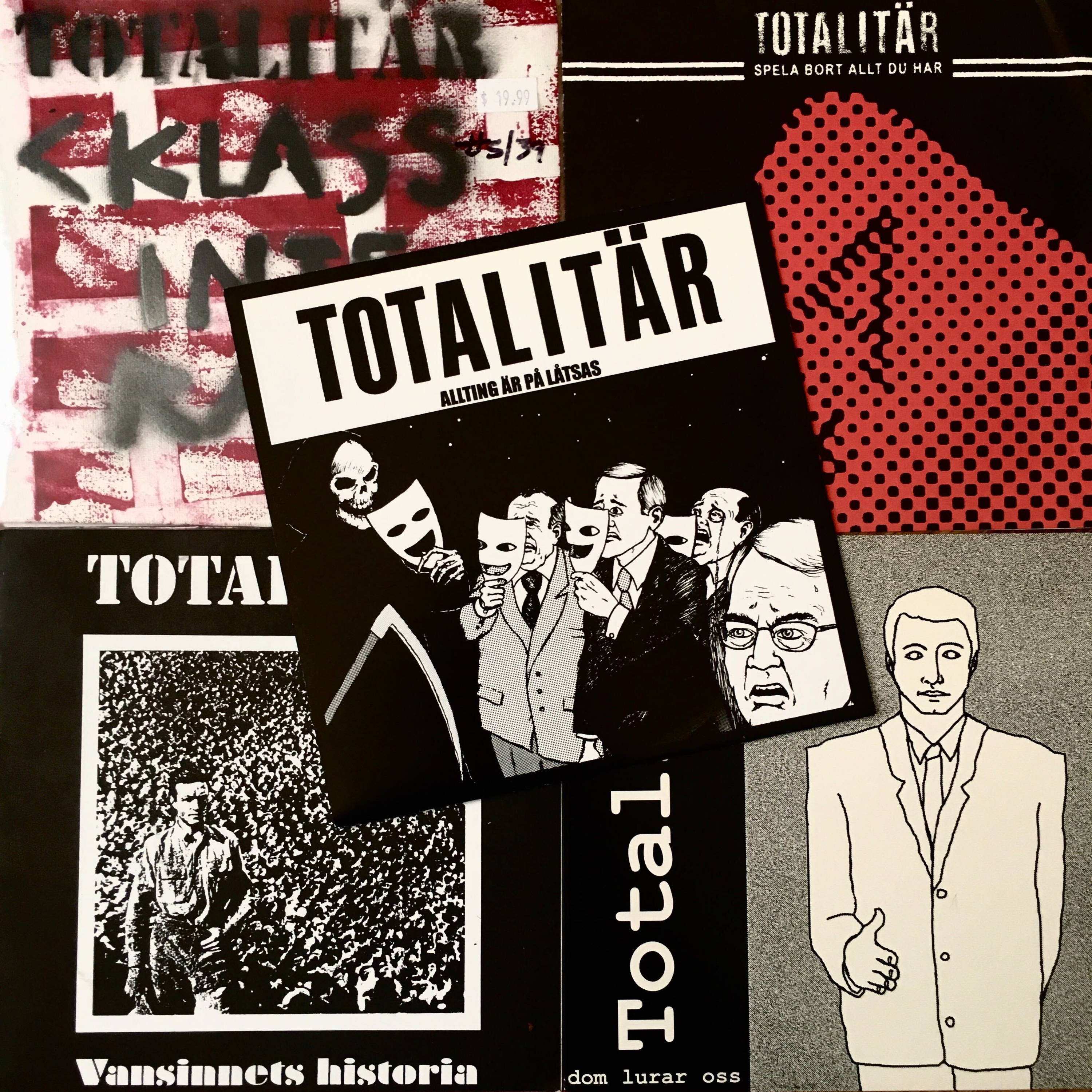 Hello and thank you for reading. Today is definitely not the first time I have written about TOTALITÄR and it probably won’t be the last. It’s funny that I sat down this afternoon to write about the recent TOTALITÄR compilation on Skrammel Records, and then I learned our copies of the Vi Är Eliten are out for delivery today! That rules. I guess it also saves you the time of reading me mindlessly rant about TOTALITÄR twice in the same month. While I have all these records, I am really excited for this stuff to be readily available at distros and shops. We don’t have our copies of the Skrammel compilation yet, but they should be on the way—so stay tuned! I think the 7”s on this compilation have been dying for a reissue. Some of them seem pretty hard to find now, while luckily others can still be found pretty easily. I remember my copy of Allting Är På Låtsas took me the longest to track down, which is ironic cos I often think it is my favorite EP of theirs. (That changes all the time.) I just looked on Discogs and the median is $70 now. Insane. It’s a 2000s record, haha... but a really damn good one. Anyway, Skrammel picks up right were they left off with the last compilation. Well, kind of. To a normal person they probably just see TOTALITÄR: 1998-2002, and think like, “Oh hell yeah, that is sick!” And they jam it. I see TOTALITÄR: 1998-2002 and begin to over-examine the contents; comparing track listings, different versions of recordings, credits, etc. Haha. They skipped over the TOTALITÄR tracks on their 1997 split with DISMACHINE. They also didn’t include the TOTALITÄR tracks from the 2001 split with DISCLOSE. I can understand that in a way, though. It would be a ton of songs to include, and it would have to be a double disc. And then, of course, both of those splits are amazing. Each side of the records is so damn good. It would be a shame to reissue just the TOTALITÄR tracks. I guess there could be licensing agreements that held back certain materials from being reissued as well. So I can understand leaving those off, but then the title doesn’t make as much sense to me. Their split with DISCLOSE is within the timeline of the title. Maybe it’s supposed to be just a 7" compilation? Their split with AUTORITÄR from 1999 was also left out. But that 7" is kind of a compilation in itself. The first two songs are from the Ni Måste Bort! session, and the other two songs are all the way back from their 1987 Luftslott session. That one made sense to leave off, but they also left out their 2002 split with DROPDEAD. I think those tracks and Allting Är På Låtsas were recorded at the same time. They were both recorded September 2000 by the master of kang, Jan Jutila. The sound is so raw… really bright in the most punishing way, and the drums sound so damn good, just perfect. The packaging on this reissue is pretty basic. If you got the first one from Skrammel, you know what to expect. However, it was really cool to see they added some full-color photos of the band on the back cover. There is minimal live footage and photos of them, so I was really excited for that. While the packaging may be minimal on this release, I still think it’s a great record to have. Even if you have all the EPs already, this is a much easier way to listen to them all haha.

While I don’t have the new Prank reissue of their own 2007 release yet, Vi Är Eliten, I know what to expect: top-notch packaging that will probably actually out-do the original, alongside some of best sound that is pressed into vinyl today. I just really wonder what’s up with the bonus 7" that came with some of the original press! I didn’t see any mention of those songs being included anywhere in this reissue, but I could’ve missed it. I know those songs are just re-recordings of old tracks but it’s cool to hear a band like TOTALITÄR do that, cos they aged like “fine wine.” I didn’t make any mention of the bonus 7" that came with the recent Skrammel reissue, whoops. There is a limited number of 500 available direct through their mailorder, so unfortunately we will not be getting copies of that. Both songs are covers that were already released. One was the “Born to Die in the Gutter” cover on that 2000s Distortion compilation, and the other is a SVART PARAD cover. I haven’t listened to the bonus 7" enough to see if that cover is from the same session as the Vi Är Eliten 7", but I am assuming so. Maybe I am wrong though, cos that session was 2006, and this compilation is supposed to end at 2002. Anyway, I should get back to work. Thanks for reading. Keep your eyes open for our copies from Skrammel, and definitely get you one of these Vi Är Eliten reissues if you don’t already have one! Peace.