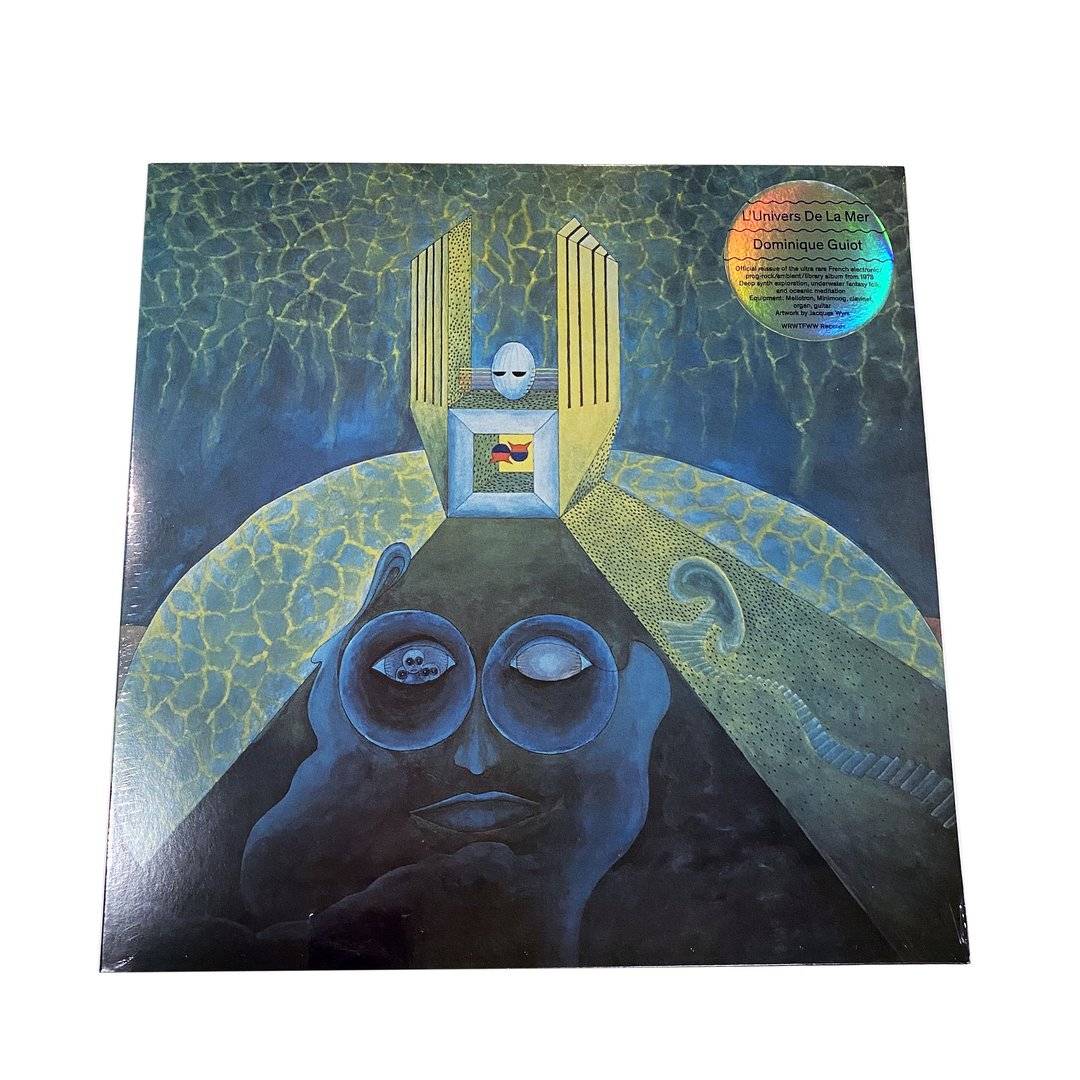 While I’ve been isolating I’ve been watching more movies than I have in years. Between all the reading and record listening that I usually do, I rarely find the time to watch feature-length movies, but I’ve been getting through at least one per day for the past couple of weeks. Being trapped in one small room for ten days has drawn me to movies that take place in rich, immersive worlds. A couple of nights ago I watched Terry Gilliam’s Brazil, and that fit the bill but I found that movie’s satire of bureaucracy interesting to contrast with the present state of America, where no one seems to be steering the ship at all. Some other night (they’re all the same) I tackled all four hours of Ben Hur, which was an equally rich world-building exercise, albeit a totally different world from Brazil.

One film I watched during the first few nights of isolation was La Planète Sauvage, a 1973 French-language animated film. The movie was cool, but one reason I wanted to watch it was because I’ve listened to its soundtrack so much over the past few years. Superior Viaduct reissued that on vinyl a few years back and has kept it in print, so it’s easy to come by. The beautiful cover art drew me toward that record (and the movie is animated in the same surrealistic style), but the music kept me returning to it again and again. It’s perfect music for putting on while I’m working or doing something that requires my attention. Like a lot of great soundtracks, it’s a record that sets a very distinct vibe when you put it on—“sinister jazz in space” maybe?—but also rewards your attention when you give it. If you haven’t checked out _ La Planète Sauvage_—the movie or the soundtrack—I’d encourage you to get on that right away.

If you do like La Planète Sauvage, there’s a good chance you’ll like my staff pick for this week too. L’Univers de la Mer, while not the soundtrack to a specific film, is a 1978 library record by the French composer Dominique Guiot featuring music meant to evoke a vibrant undersea world. While La Planète Sauvage’s palette is mostly acoustic instruments along with a wah-drenched electric guitar, L’Univers de la Mer relies on synthesizers and that, along with the rich evocations of wide-open undersea landscapes, makes it sound like a mix between La Planète Sauvage and 70s synth experiments from Klaus Schulze, Cluster, and Tangerine Dream. Like all the aforementioned records, you can put it on in the background to bring some fantasy to your day, or you can give it all of your attention, letting it transport you into its purpose-built world.

Switzerland’s We Release Whatever the Fuck We Want Records has just pressed up a new version of L’Univers de la Mer featuring the original cover artwork, now presented in its full glory rather than being obscured by text as on the original version. Sorry State has copies in stock right now. WRWTFWW is a label worth keeping an eye on if you’re into this kind of thing… you might remember them from their reissue of Yasuaki Shimizu’s great ambient jazz album Kakashi a few years back or their represses of those killer Grauzone 12” EPs last year. 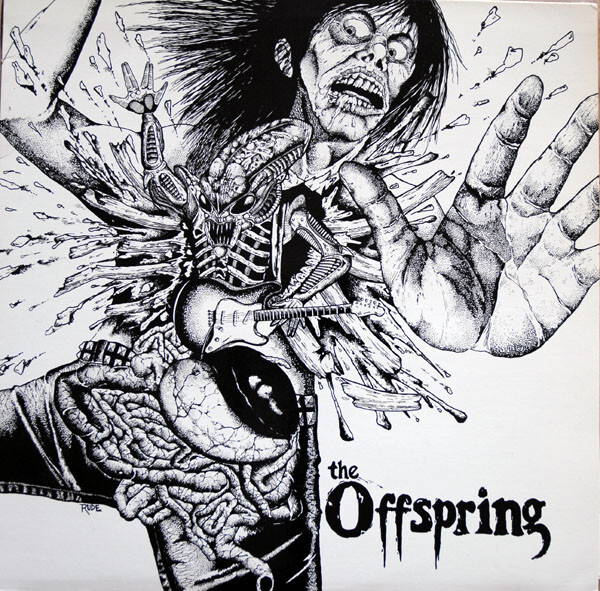 So…in what I’m sure is a big “duh Jeff” moment: I’m really glad I tested negative for Covid. I’m also happy that, while I’m sure he doesn’t feel real great, Daniel is hanging in there pretty good… but I’m sure waiting it out in quarantine totally sucks. When I’m in headspace where I’m either worried or feel vulnerable, I tend to gravitate back toward things I loved when I was younger. When I was a young teenager, like 13, before moving onto hardcore, The Offspring was my FAVORITE band. Like, in my mind, I sincerely believed music didn’t get any better. My malnourished music taste at that time must have just been thoroughly stimulated by that same “whoa-oh” melodic structure that The Offspring use in just about every song. Needless to say, I’ve moved on quite a bit since then.

But while doing some revisiting, I decided to listen to the first Offspring record, which I hadn’t heard in quite a while. And man, I gotta say, it’s a pretty damn good record. Their melodic songwriting signature that would appear on later records is definitely present, but there are also some very cool and dark things going on all over this record. Weirdly, I don’t wanna say it’s dumbed down, but I think musically this record is much more unique and adventurous than their other records. It’s funny, the sort of “Eastern”-influenced riffs that most people would probably associate with “Come Out and Play” seem to have been a big part of the band’s songwriting even this early on. A song like “Tehran” is a perfect showcase of this. That said, rather than being a device in a kind of novelty song context, their use of this sound comes across as being more influenced by surf-inflected punk bands like Agent Orange or even Dead Kennedys. Similarly, upon rehearing the song “Demons”, I was blown away by how much it clearly sounds like TSOL. Plus, you gotta love the morbidity of a track like “Beheaded”. Also, while not on the CD version I had when I was a kid, “Kill The President” totally holds up. Clearly a product of the prior wave of California punk bands surrounding them, The Offspring wear their influences on their sleeves. Sure, maybe with this record coming out 1989 they were a bit late to the game, but to me this sounds like a classic LA hardcore record.

Here’s kind of a silly mental exercise: Let’s say you were to exclude the the reality of the “year that punk broke” and pretend that The Offspring’s later MTV-era records didn’t exist, and therefore they wouldn’t color your opinion… I think if this scenario were the case, and I were to approach listening to this first Offspring record like they were an unknown/obscure 80s punk band, then my only thought would be: “This is killer!” It’s interesting to think of an era when The Offspring were just a local band in the Southern California hardcore scene. The collector-nerd part of me does entertain the idea of trying to snag an og copy of their debut on Nemesis with the highly superior original artwork. Then again, maybe $200 ain’t worth it. Oh well, I had fun listening to it.

On a side note, when we got in that huge collection of 80s punk comps a couple weeks back, a few of those We Got Power compilations on Mystic were mixed in. The second installment, We Got Power II: Party Animal, features a track by a band called Manic Subsidal, which was an early incarnation of The Offspring. Pretty funny, huh? Listen to that track here: https://www.youtube.com/watch?v=_MieMdIMlKM

As always, thanks for reading.
-Jeff 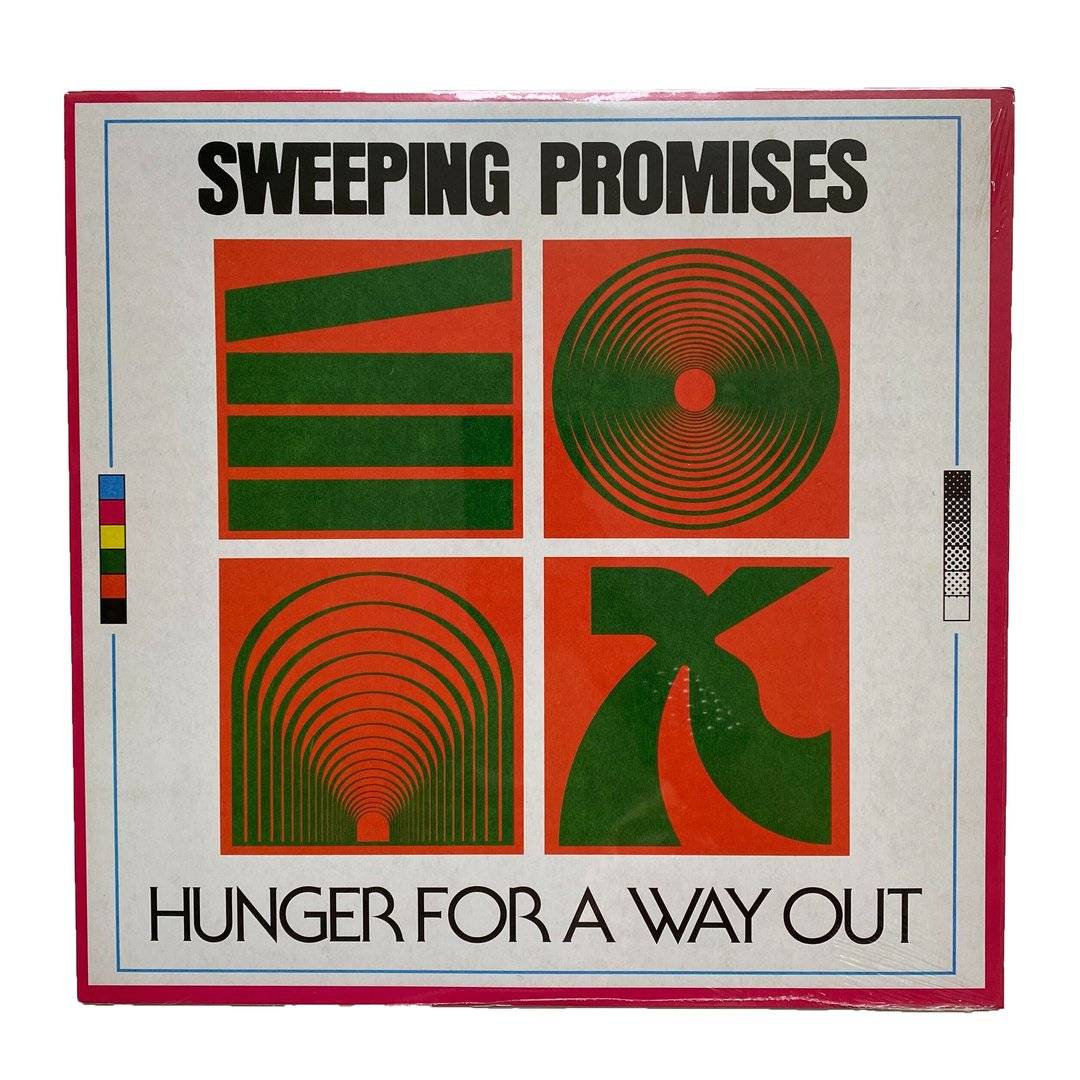 Sweeping Promises: Hunger For A Way Out 12” (Feel It)

I knew absolutely nothing about this band aside from the fact that Feel It! Records put out this record. It was recommended to me while I was shopping at Vinyl Conflict and after they threw it on the shop table I knew I had to take it home. This album strikes me as a perfect new wave / post punk record in the year 2020. Every song is melancholy and melodic, but they always throw in what feels like an uncomfortable sounding bridge with some sort key change in the guitars or synth, which gives the tunes a dynamic that is refreshing to me (let the record show I’m usually pretty anti-synthesizer in my punk, but I guess this is a little different). Another huge selling point for me is the vocals. The vocalist has a great range and a phenomenal sense of vocal rhythm spacing (which is sometimes more important than the sound of the vocals to me). To round it all out, the bass and drums are perfectly dry and thumpy in the best way.

I won’t pretend like I’m an expert in this kind of thing, but I am a sucker for a good hook and melody. If the title track doesn’t suck you in right off the bat I don’t know what to tell you. 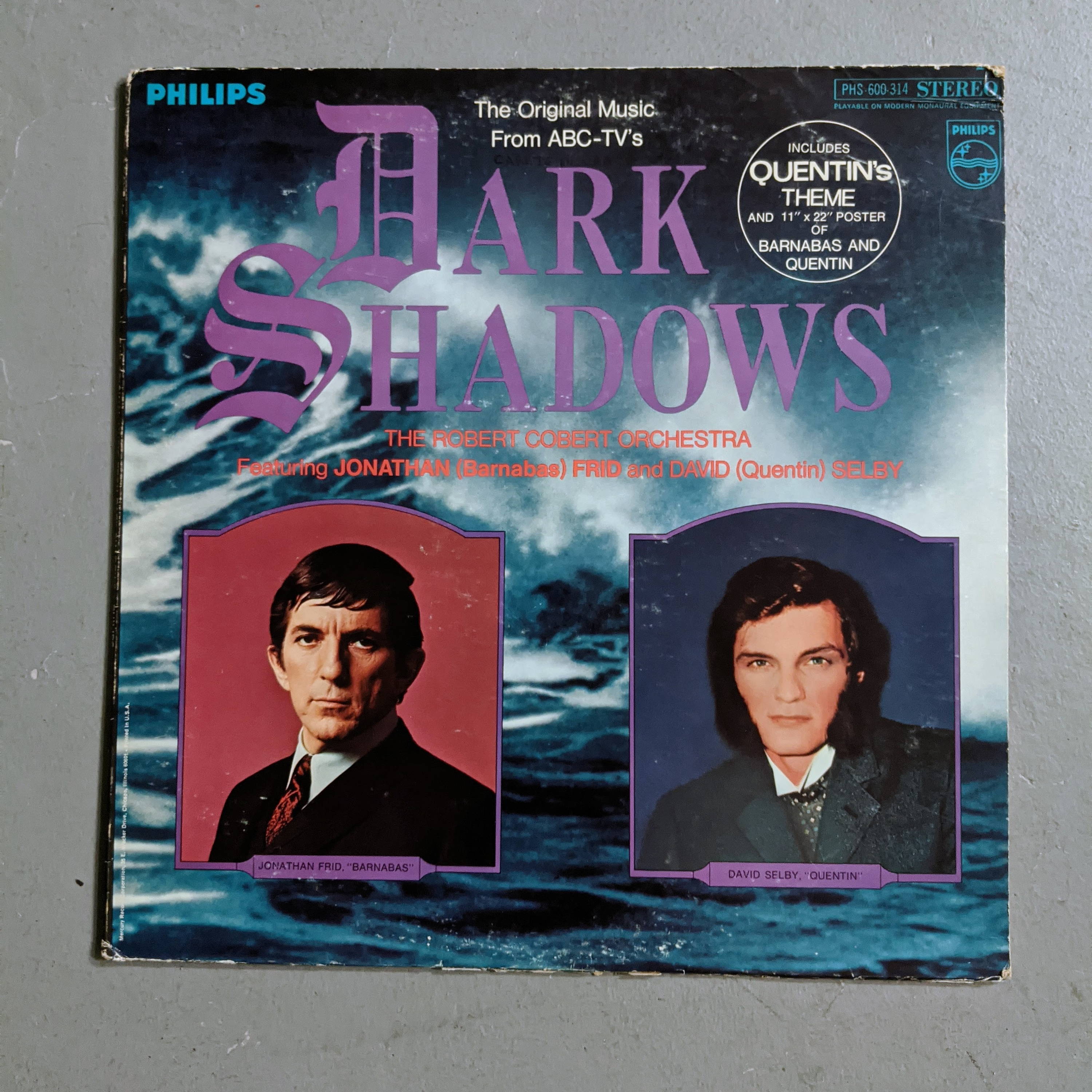 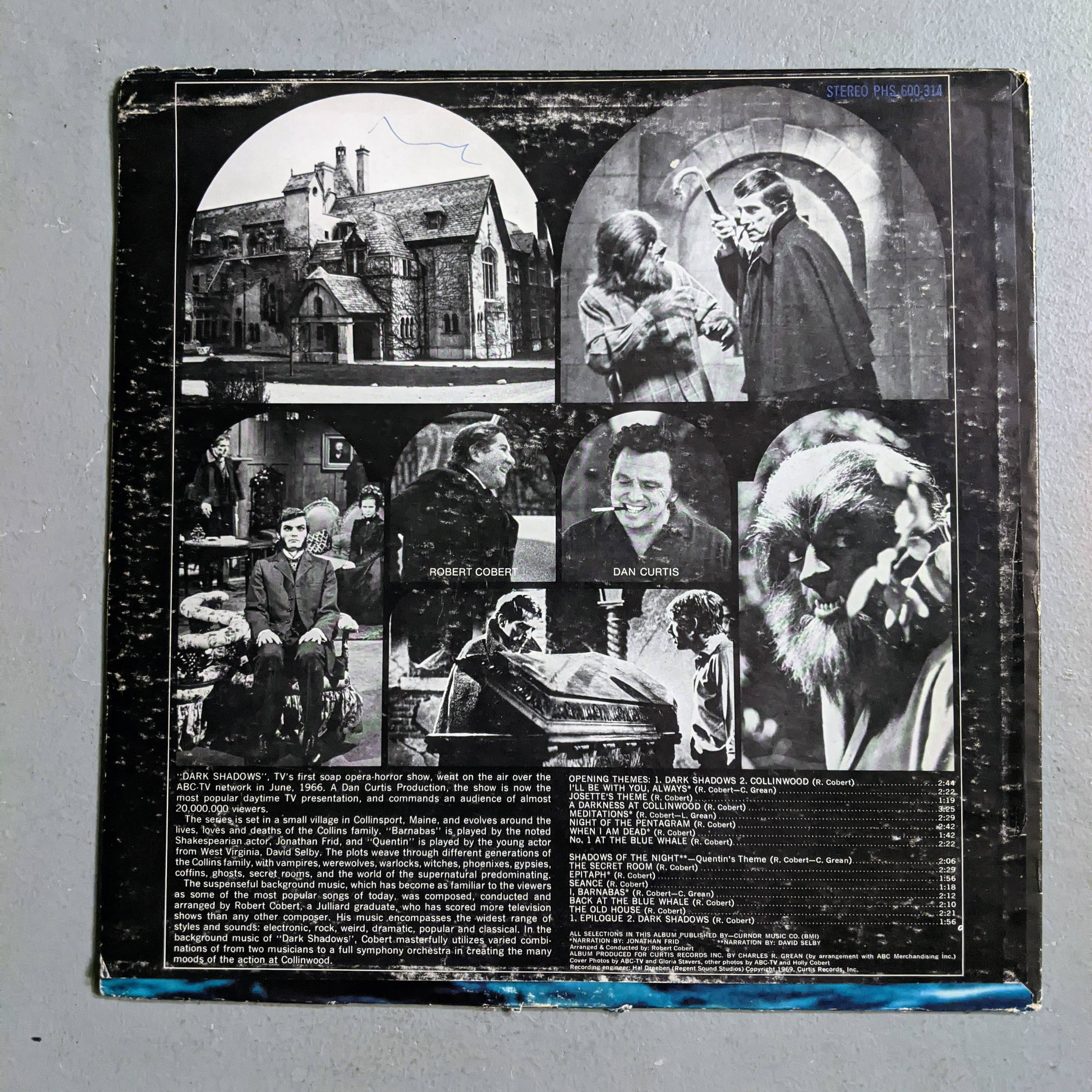 Happy Halloween Sorry Staters. Our apologies for missing you last week. It’s 2020 and shit definitely happens. Anyway, that is behind us and we move on and find ourselves approaching October 31st and Halloween weekend. I hope you all manage to have some safe fun one way or the other. Recently whilst going through our famous bargain bins I found a great seasonal choice for this week’s pick.

I was not familiar with the TV show Dark Shadows until watching an episode of the The King Of Queens years ago. In it, the character played by Patton Oswalt wanted to attend a Dark Shadows convention and had a Barnabas Collins outfit and everything. His girlfriend, played by SNL’s Rachel Dratch wouldn’t allow him to go and the hilarities followed. I still haven’t seen the original Dark Shadows but did enjoy the Tim Burton directed movie that came out in 2012. Apparently, there is also a short run TV remake that came out in the early nineties and I haven’t seen that either, so don’t look for a fan’s expert analysis or review here.

Back to the soundtrack LP that I have here. It’s kinda cool and reminds me of the message that was written on record company dust sleeves about records being your best form of entertainment. They really are. This one provides a little bit of everything to please the record buyer back in the late sixties and early seventies. You got the music from the show, artwork and photos from the show, a poster of the main characters (this copy did not have one) and liner notes about the show and the music.
The man behind the music was a Robert Cobert and his Orchestra. Cobert, it says, was a Julliard graduate and he certainly incorporated some of his classical training on this soundtrack. There’s cool and creepy electronic sounds with the spoken word dark lyrics over the top. Being on a bit of a downer mood this past week I found the track When I am Dead spoke to me. Ha, ha.

I’m a big fan of soundtrack records in general and have quite a few in my collection. As a DJ I find them great sources for instrumental music and stuff that isn’t often heard and can be used in sets. They were created to inspire a mood and to accentuate the action onscreen after all and so often scenes set in clubs and bars etc. might have some sort of appropriate music in the background. This Dark Shadows soundtrack is no exception and has a couple of pieces that were played during scenes at The Blue Whale, the show’s hip night spot. One of them is a pretty groovy surf-garage instrumental called Back At The Blue Whale. It’s pretty much the most up-tempo thing on the record but could definitely be played amongst a set of sixties garage and beat music. I was pretty psyched and satisfied. Indeed, this record was a great choice of entertainment. You can find one cheap on line or in the bargain bins of your local emporium and I would recommend picking it up whether you are a fan of the show, like vampire stuff, enjoy sixties music or just want to hear poems about death and occult shit. It’s all here. I’ll leave you with a couple of links to check it out.

Back At The Blue Whale
https://youtu.be/mNusZRf5wUE

When I Am Dead
https://youtu.be/1eBjnpUnvQo

Thanks for reading and keep digging.