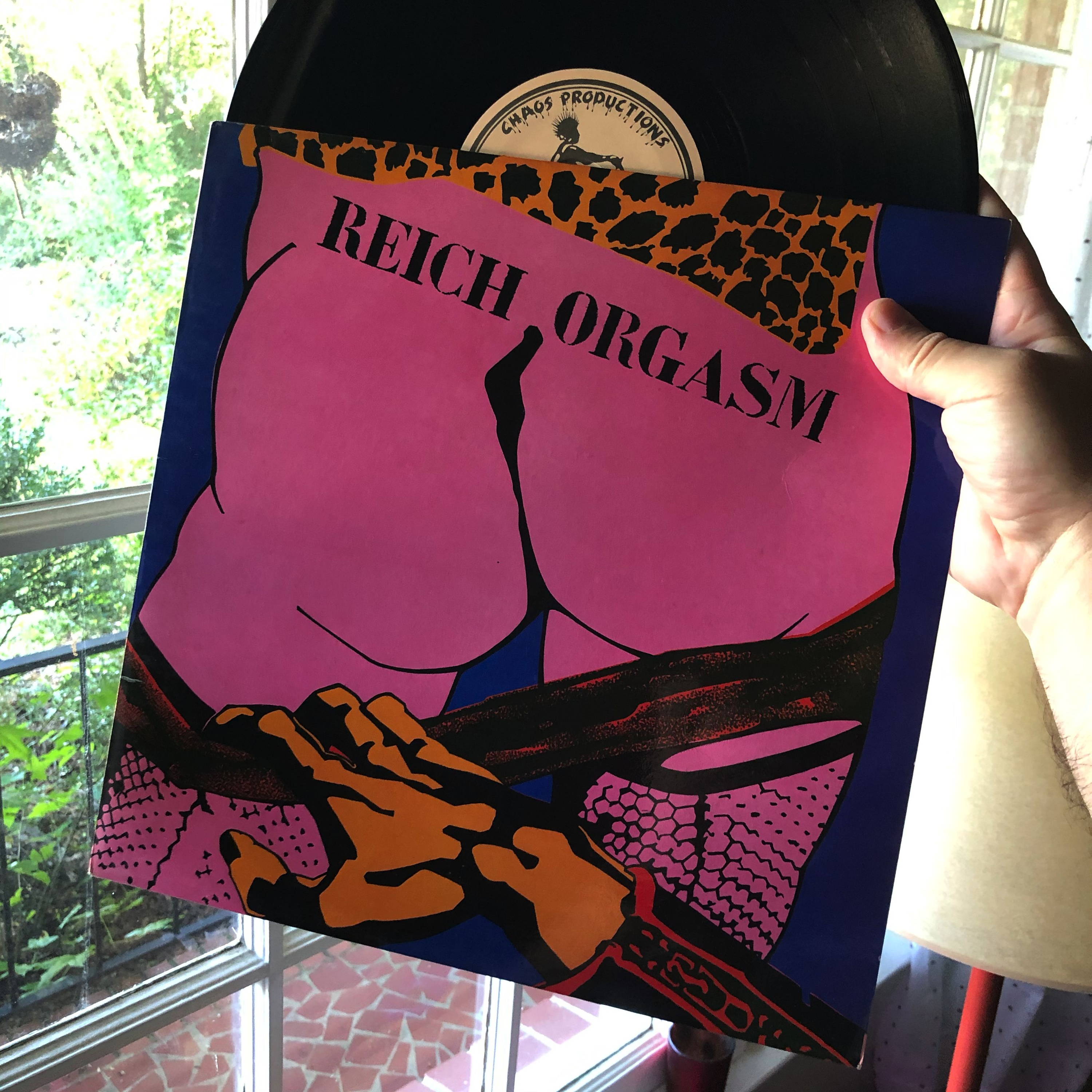 So, this week I’m a little nervous that my staff pick is an oi! record whose lyrics I can’t understand that has the word “reich” in the band name. However, my research indicates that everything is on the up and up. I hope someone will let me know if I’m wrong.

About the band name. It doesn’t refer to Hitler or the Third Reich, but to the second-generation psychoanalyst Wilhelm Reich, who was a student of Sigmund Freud (i.e. the first-generation psychoanalyst). While I’m no Reich scholar, from what I understand, he thought sexual repression was at the root of many—if not most or all—of humanity’s ills, including problems with mental and physical health, political and social repression, and a host of other problems. While “Reich Orgasm” doesn’t seem to be any kind of technical term in Reich’s work as far as I can tell, it alludes to the potential healing powers of orgasm in Reich’s philosophy. It’s a name that blurs the line between immediate physical pleasure and what we think of as a higher or more cerebral senses of good.

As for the band Reich Orgasm, they formed in 1978 in Orléans, France, but didn’t release this, their only vinyl other than compilation appearances, until 1984. While I can’t find much information about the band, their drummer was the main person behind the Chaos Productions label, which not only released this LP but also the Chaos En France compilations (on which Reich Orgasm appeared) and records from several other excellent punk / oi! groups from the French provinces such as Komintern Sect, Trotskids, and Wunderbach. From what I understand, the band broke up in 1987 due to frustration with the increasing right-wing tendencies in the French skinhead scene.

As for the music on this LP, it’s top-notch tough and melodic oi! that any fan of Rixe will love. However, while both bands are tough and catchy, Reich Orgasm’s melodies are often more delicate and songwriter-ly. While I like a tough oi! anthem as much as anyone, I’ve always been partial to the poppier moments of bands like the Business. Highlights on this LP include the great pop song “Ma Fiancée 2,” which reminds me of my favorite darker, later-era Ramones songs, and the anthemic “Juin 40,” which has this great moment that goes “un, deux, trois, quatre, OOOO!” It’s like a French Ramones count-off followed by a big Tom Warrior grunt and it’s my favorite thing in music at the moment. The record smokes all the way through, though, so dial it up on the YouTubes or streaming services and check it out. 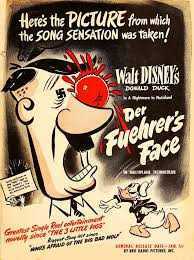 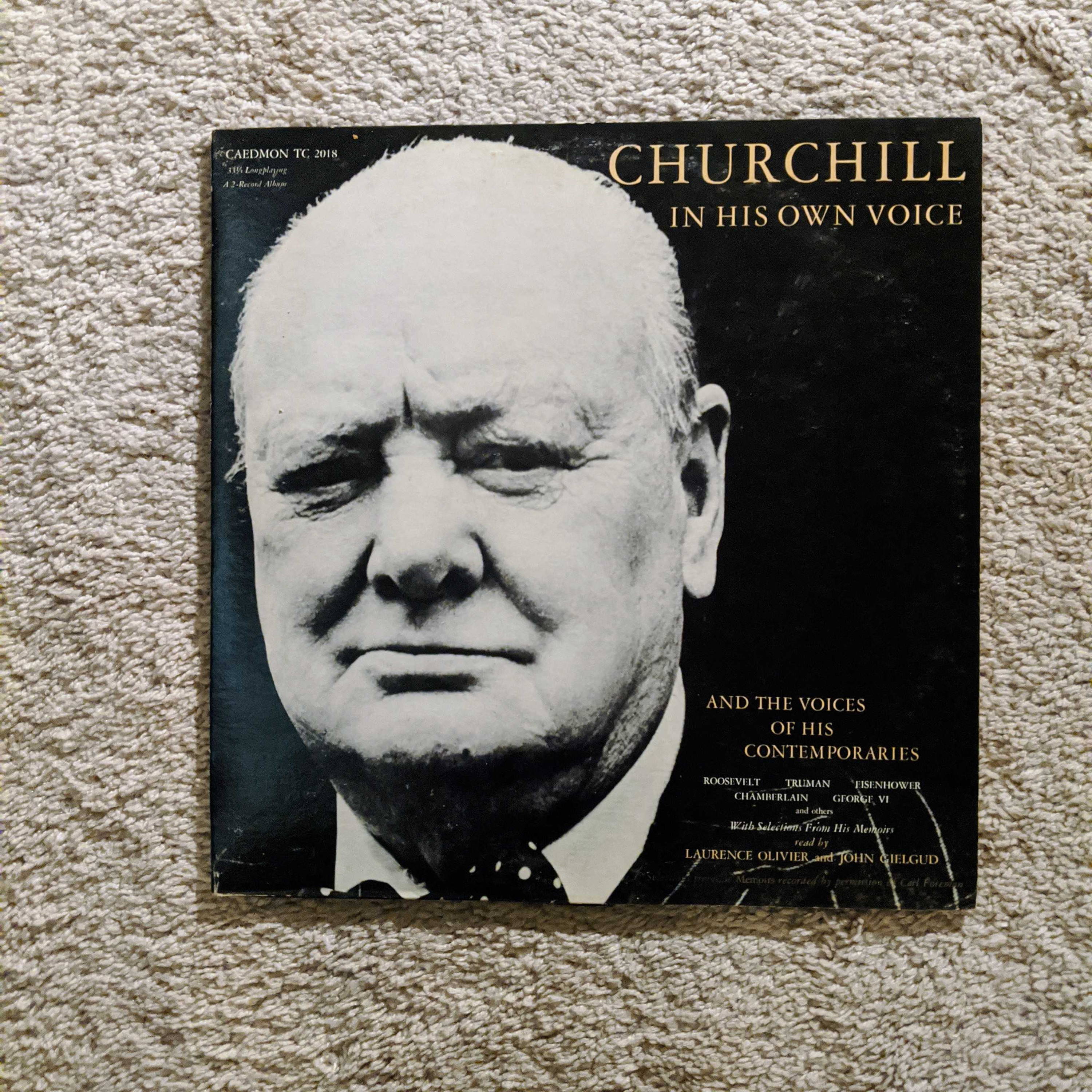 Hello one and all. Thanks for opening up our Newsletter again and reading, it means a lot.

This week finds me in a bit of a weird mood, being effected by personal issues and those of some of my friends and from the shit show that is America right now. Honestly it has made it hard for me to concentrate on writing about a “cool” record or trying to find something that I think folks might get in to. It’s not that I am not listening to music, as I do constantly but it almost feels trivial to the greater events taking place right now. This is of course silly of me to think that way as I was only saying last week how music has the ability to inspire and save souls. There are plenty of things that I have been playing though and if I was out somewhere as a DJ, I know I could work it out in the DJ booth somehow.

Some tunes that I have listened to include The Music Machine and their version of Taxman. Abba and Money, Money, Money, The Castaways and Liar, Liar, to name three. They seemed apt right now. Something else that I have been digging is a record I have of speeches by Winston Churchill. As we face another fascist threat from home grown Nazis, I felt the need to hear a real statesman talk about those issues that we should have put to bed years ago. The world came together before to defeat fascism and we must now do it again. I don’t think anyone back then thought that the United States would be the threat to world peace that we now find ourselves in but here we are with a sitting president openly supporting and encouraging white supremacists and dividing the country like no other before him. Here’s a clip of Churchill addressing congress back then for an example of what a true leader sounds like.

Lastly, I found another clip of a novelty record of sorts that was put out as a middle finger to Hitler during the war and you really could insert Trump in his place and the record would sound just as appropriate. It came out as a propaganda booster and featured a cartoon short with Donald Duck (props to Disney) which is definitely worth watching. The song is a parody of an actual German Nazi song and is performed by Spike Jones and His City Slickers. I highly recommend you read the Wikipedia page concerning this film and enjoy the clip below.

Take care everyone. Be kind to each other. Don’t allow hate to triumph. Find salvation in music and the other arts. I’ll see you all next week. 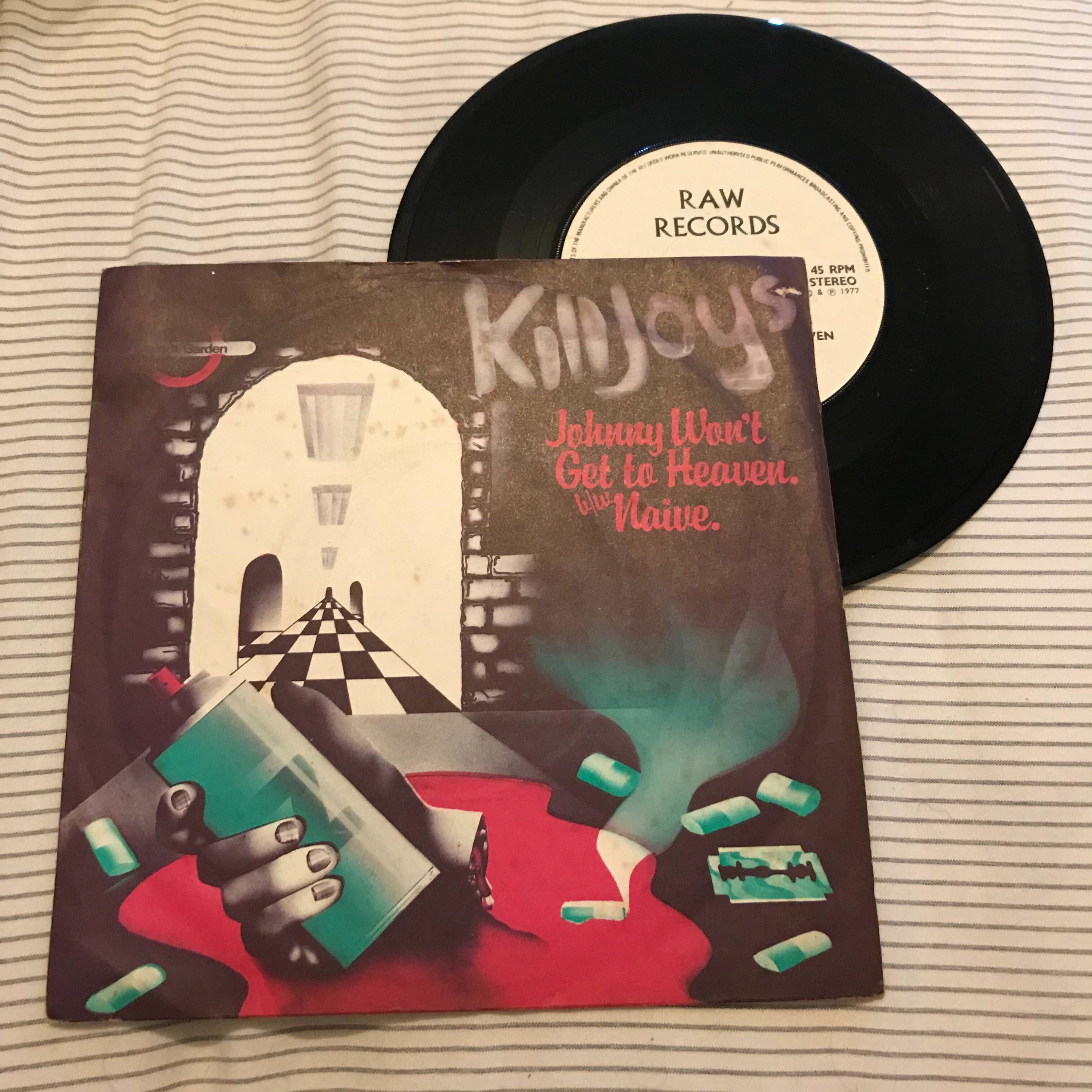 Woof, life is an endless hail storm of golf ball sized pain, amirite? Just kidding, I’m trying to keep my head above water as best I can, as I’m sure all of you are too. Since moving away from Sorry State it has been harder to keep up with what’s new in the punk world. I sure do miss opening up packages from all over the world and throwing on new records on a daily basis. But that’s okay! It just means I need to be a lil bit more proactive about looking for new stuff to listen to now.

Anyway, here’s a staff pick that is not a new release at all:

I made an appointment at Vinyl Conflict (a local shop in Richmond) and ended up walking out with a handful of stuff I was looking for, but this was a total dive for me. The owner of the shop, Bobby, pointed it out to me and suggested it might be up my alley. We listened to the A-side in the shop and I was sold. Off the bat it kinda reminds me of Stiff Little Fingers based on how the guitar sounds and how hooky the riffs are. It’s fast in the same way the Ramones are fast. The drums are pounding 16th notes, and it almost sounds like the guitar is jamming exclusively downstrokes (at least that’s what I like to imagine, makes it way cooler to me).

If I understand what I have read about this single correctly, this is Killjoys only official release during their time as a band, and the bulk of their recorded material was released decades later. Another fun fact, the bass player “Gem” went on to play with Girlschool in the mid 80s.

Overall, a great 77 punk single. I’ve been spinning it all week and can’t stop! 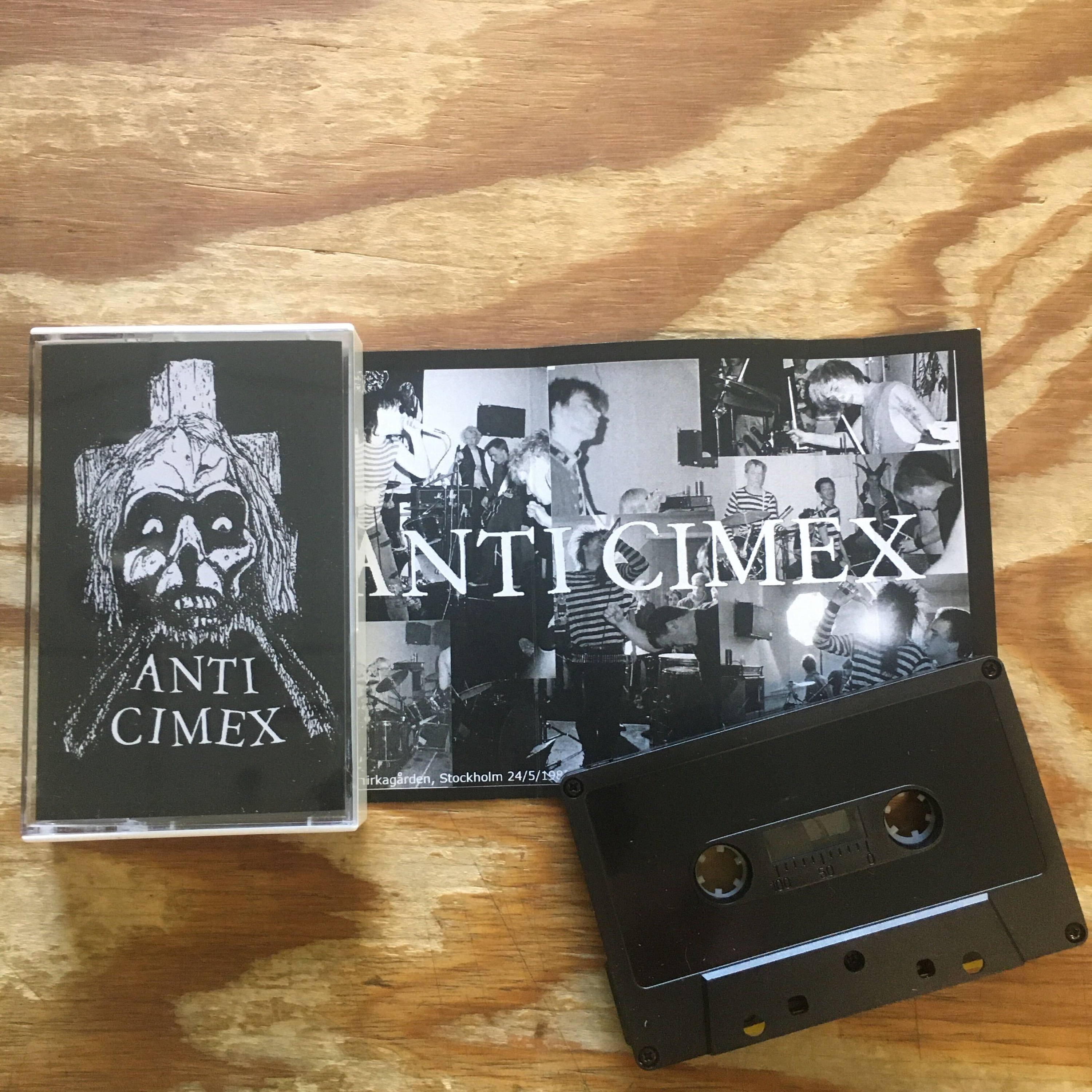 This cassette was originally released in 1986/87 on Hardcore Horror Records, a Swedish labeled who released bands like Black Uniforms, D.N.A, and Libresse (a band I have previously written about!). I guessed that release date of the original based on the catalog number; I'm not 100% sure when it was released. Alas, it has been officially re-issued by Cimex Records (Sweden) and Godzilla Records (UK), limited to 200 copies worldwide. I saw this release via Dtakt & Rapunk and got so excited, as this tape has been long out-of-print. Has anyone reading this ever seen an original? I actually learned that neither label even had an original cassette! It was a friend of theirs, Masken from Sweden, who provided scans of the j-card and a rip of the cassette (which was mastered for this re-issue.)

Anyway, when I saw the cassette I e-mailed Jocke to see if I could get a copy, or better yet tell me where to get some distro copies! He told me he got his copies direct from Charlie (the drummer of Anti-Cimex, who does Cimex Records). He said I couldn't get copies any longer from Charlie, but he was nice enough to put me in touch with Gianluca of Godzilla Records. I got a reply from Gianluca, and learned that the shipping would cost about 40 USD... As I spent time contemplating whether or not I thought people in the States would buy a cassette whose cost would be so high, I received another reply from Gianluca and he told me he was willing to pay for half of shipping in order to help us bring the cassettes into US. So fucking COOL of him!!! I can't imagine what the retail cost would have been without that discounted shipping rate...

Unlike the original cassette, this tape features the bonus track "Alarm" that was recorded later that year. It's really cool to hear some of the tracks that appear near the end of his tape. They are slightly different versions than those that appear on the actual records. Listener beware, yes this is a pretty "lo-fi" live recording. However, is was re-mastered by Daniel Husayn at North London Bomb Factory. This dude knows exactly what the fuck he's doing! He's actually our go-to for mastering vinyl releases on BPDT. Anyway, even though its a fairly rough recording it is awesome to hear the raw aggression of Anti-Cimex live! Given that the original tape is so damn rare, it is truly a must have for the Cimex fan. Though it is a bit pricey for an import cassette, they are fairly limited and didn't have any US distribution previous to this parcel coming into the States. I'm not sure how many copies were originally made.

The label Hardcore Horror that released it was pretty short-lived. Hardcore Horror Records was a label operated by Mats Bodenmalm who started Distortion Records. If you don't know Distortion, they are a Swedish label active in the 90's and early 00's who released and re-issued many legendary (and mostly) Swedish bands including Disfear, Crude SS, Shitlickers, Avskum, Moderat Likvidation, and Disclose. Gianluca also told me that while they left the Hardcore Horror Records logo on the back cover for this re-issue, the label actually had nothing to do with the re-issue of the cassette. Usually I would take this time to take a photo my Cimex collection cos I am such a fan (I mean who isn't right...) but my records are still all in boxes for a move.

By the way, the Dig Your Own Grave compilation tape with fanzine I had previously written about are now in stock at Sorry State! I'm actually listening to a tape right now! The sound is decent like I said before, but man the zine with interviews is absolutely to die for! The Krigshoder Krig I Hodet tape that Jeff wrote about a while ago has also arrived from Suck Blood. The simple way to put it: this tape is a must have. If you haven't listened to Krigshoder yet, do it immediately! (Link at bottom)

And finally, the Nightfeeder Rotten tapes I wrote about last week have already sold out, if you missed out on it feel free to hit me up for a copy. in.decay@yahoo.com