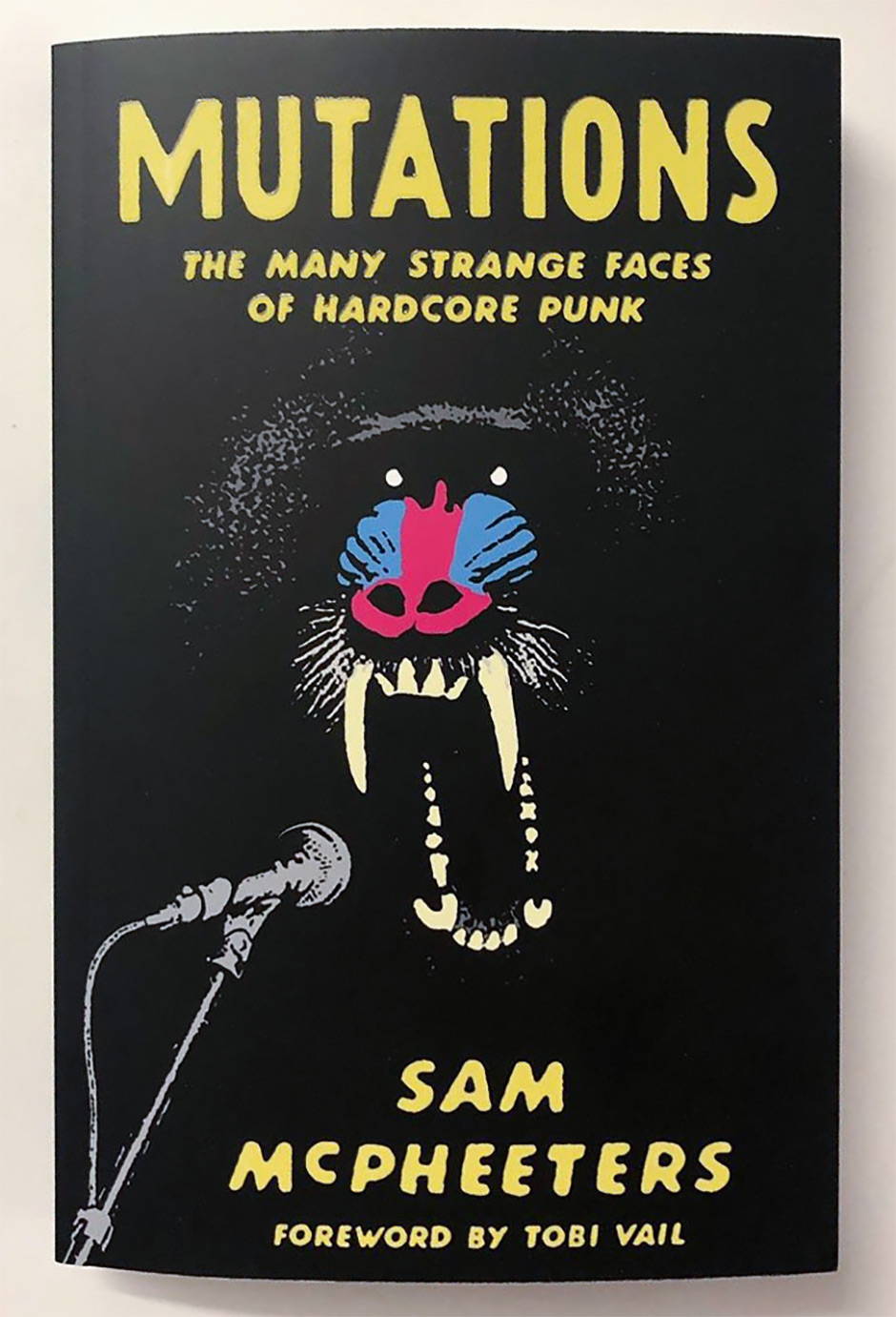 I just finished the new Sam McPheeters book, which I plowed through in about a day and a half. As I’m sure I’ve mentioned many times, I’m a junkie for punk books—I read almost every single one I can find—and he quality of writing and depth of thought here make this is one of the best out there. One problem I have with punk books is that they usually present themselves as objective histories, but they don’t engage with the troublesome questions of historiography. Thus, what happens is the authors either parrot established narratives and received wisdom about the genre and/or they’re blind to their own biases and the idiosyncrasies of their particular world view or lived experience. Sam McPheeters doesn’t have either problem. This is partly because he cut his teeth in a smaller scene during what’s usually described as one of punk’s fallow periods, so his own story doesn’t neatly fit into punk’s grand narratives. But, mostly, it’s because McPheeters seems trapped in his own head, second-guessing and criticizing his every move, both as a human being and as a writer. When he was in Born Against he was a relentless antagonist, and he remains so as an author, constantly (and often brutally) pointing out inconsistencies, ulterior motives, and plain old bullshit. As McPheeters notes in this book, the rear-view mirror of punk can feel like a high school football player reminiscing about his glory days, but McPheeters’ version is more like an addiction / recovery narrative. He acknowledges some crazy / interesting / fun stuff happened, but there’s a sense of shame and regret that hangs over everything like a sheer curtain.

If you devour punk books like I do, there’s so much material here you’ll love. McPheeters’ investigative journalism is great, particularly the lengthy piece about Doc Dart from the Crucifucks, which I remember reading online a few years ago. His first-hand tales of tours, making zines, and various scene dramas are always interesting and hilarious. His account of the infamous Born Against / Sick of It All radio debate is a must-read. And there is some poignant music criticism, with McPheeters singing the praises of the Cro-Mags, Void, and Youth of Today in ways that articulate why they were so important while acknowledging the inevitable complications.

He’s so even-handed and eloquent about his favorite bands and records that it’s even more frustrating that he’s so hard on himself. I’ve known so many people like this who were brilliant, but reserved their most astute and cutting criticism for themselves. Maybe I’m naïve, but I treasure my involvement with hardcore punk, and while I don’t need to see it celebrated uncritically, I’m also defensive about it. Maybe I’m defensive because some parts of Mutations hit too close to home. When McPheeters writes about quitting playing music and disengaging from the scene, it makes me wonder if I’ll hit a point where punk is part of my past, where even listening to the music will feel like flipping through an old photo album. And if I don’t take that path, am I making a mistake? Am I dooming myself to a lifetime as a man-child? Usually, an enjoyable punk book will make me dig out a few records I haven’t spun in a long time, but this is the shit Mutations has left running through my head… 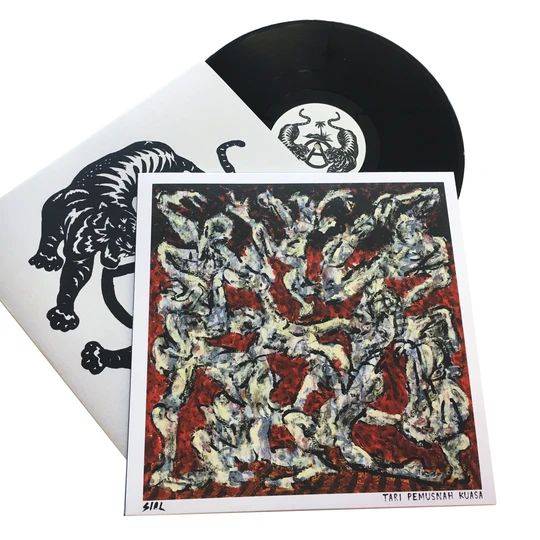 Goddamn, what a crusher! Singapore’s Sial has always piqued my interest with their previous releases. On their 7” Binasa from a couple years back, I remember thinking how they were one of the cooler bands doing a sort of noisy pogo punk thing. But upon closer inspection, I think categorizing Sial alongside bands like Disorder is almost belittling them. It’s not as if they’re just aping like 80s noise punk or something. On this new LP, Tari Pemusnah Kuasa, the band really has worked their sound down to something lethal. Honestly, listening to the riffs, it’s not as if they strike me as totally unique. But I think what’s more important is that Sial creates a palpable atmosphere and orchestrates with intention how sections of their songs will impact you. In turn, listening all the way through, you find yourself being caught off guard by really powerful moments. There is something almost primal about their sound, where everything will strip down to only pounding drums over these meditative riffs --and while the main vocalist still chants aggressively, underneath there is a creepy whispered voice that makes the vibe feel both brutal and haunting at the same time. Of course, these primal drum beats only serve as a brief period of calm just before an all-out assault of intense hardcore. I think that’s the other thing I pick up on when listening to Sial: nothing seems forced or contrived. The band delivers their noisy yet musical hardcore like they fucking mean it. It’s less like they sat down and tried to put a bunch of killer riffs together and make songs… it’s more like a methodical, thoughtful and angry catharsis. I don’t know how any punk who claims to love raging hardcore could listen to the closing track “Wanita” and not get goosebumps. Anyway, that’s enough of my ramblings. I dig this record.

On the total other end of the spectrum: yesterday I brought home a bunch of records to list on the webstore. I found myself happily blasting reggae all afternoon. Assuming it hasn’t sold yet, I highly recommend checking out the Studio One Rub-A-Dub compilation. Very nice collection of doob-smoke appropriate jams on there. Jah! 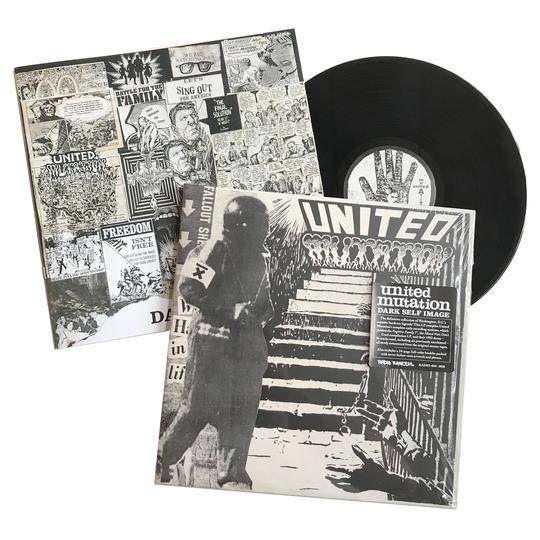 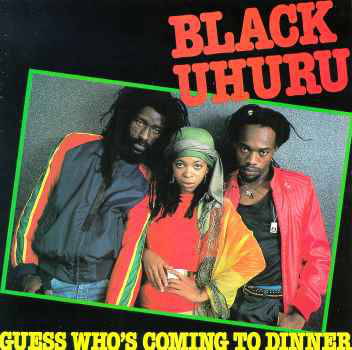 My favorite new hardcore release I've heard all year maybe. Holy shit. I can't think of one band playing as fast as these fools while also being water tight. This is the kind of hardcore that can only be executed with a razor sharp drummer. Every time I listen I am in awe of how perfectly the drums cut. 5 songs on a single sided flexi? That's what I'm fuckin' talkin' about! Here are some phrases I said out loud to myself while listening to this the first time: "OOOOO!", "what the FUCK", "Oh, that's dirty", "Oh baby", "HOW?".

Finally a reissue of this criminally underrated DC area classic. United Mutation is often looked over when people talk about DC hardcore. Maybe it's because they were from Annandale Virginia (a suburb of DC), or maybe it's because they had a different approach to hardcore than their peers in DC. UM was dirtier, darker, and a lil more experimental. I jokingly say that UM reminds of what GISM would sound like if they were from the DC suburbs. This release features 26 tracks, 6 of which were previously unreleased, and it's all killer no filler. I believe we are sold out right now, but we should be getting as restock in any day. Keep your eyes peeled!

I picked up a used copy of this last week at the store. I won't pretend to know much of anything about Reggae or Dub, but I know I love this record. I love the low thumping bass tone and the monotonous grooves, I love haunting and relaxing vocal melodies, and I love the percussion. It has been on the turntable more than anything else for me this week!

Side note: I was featured on my friend John's podcast, Cruel Noise. Check it out! https://www.stitcher.com/podcast/cruel-noise/e/69559400?autoplay=true 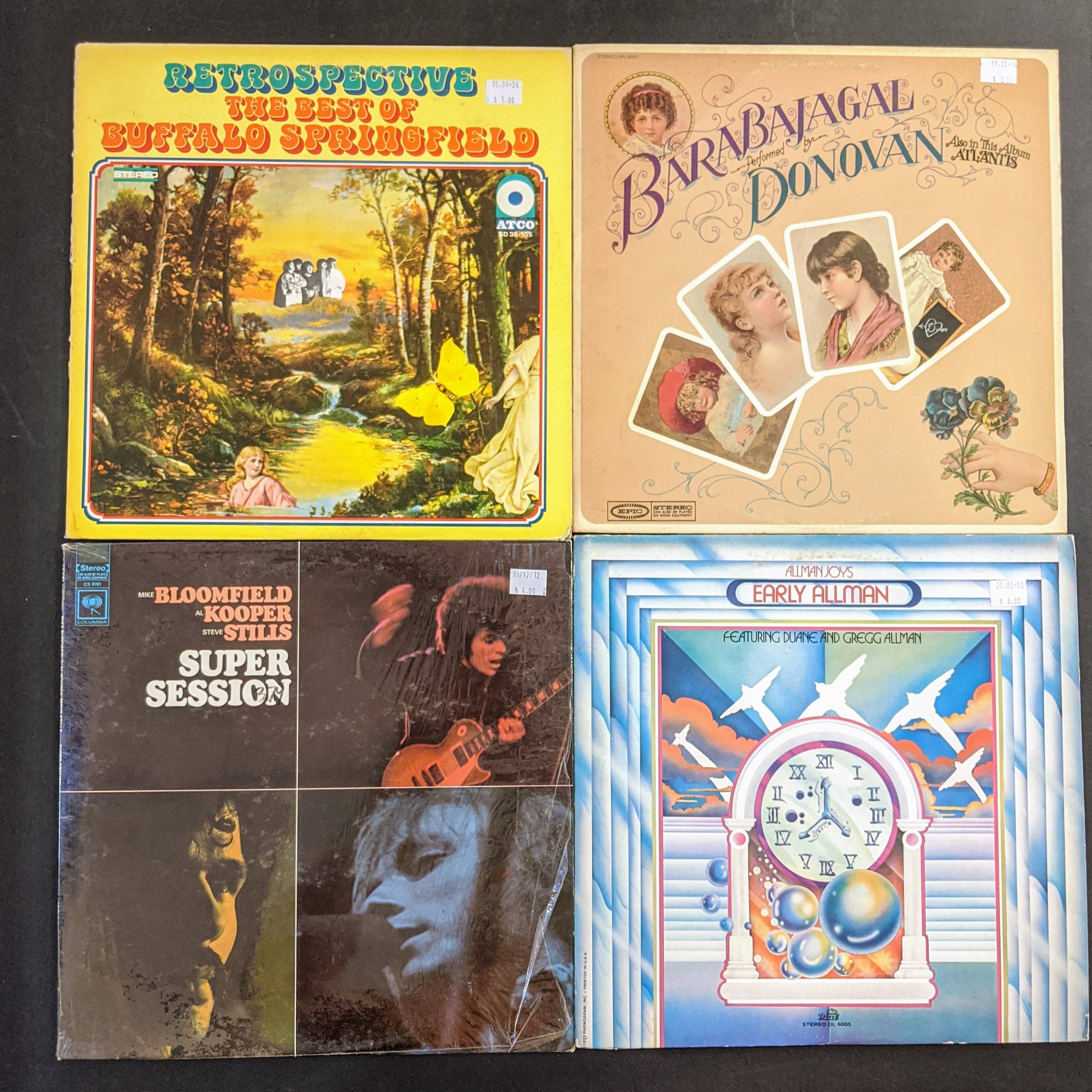 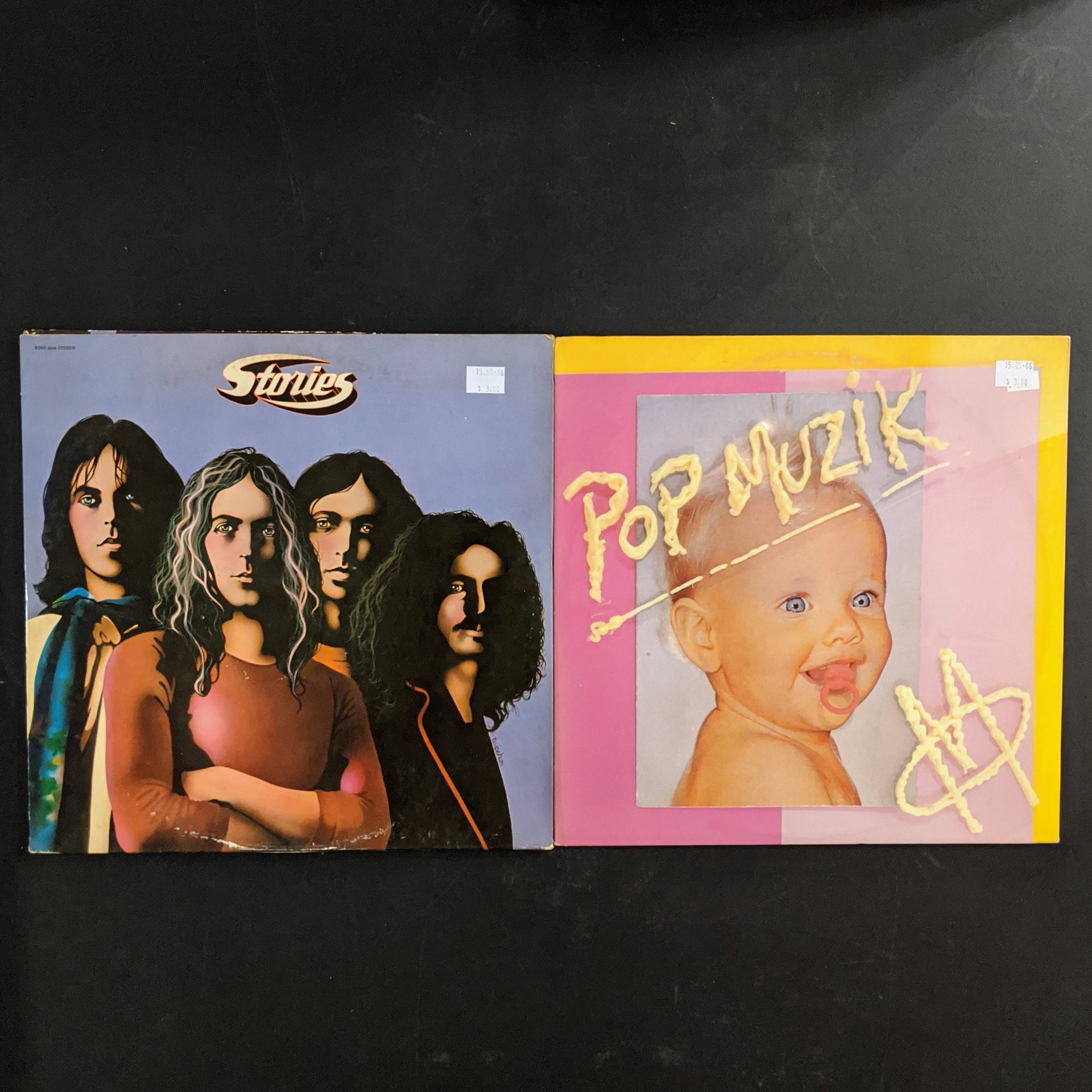 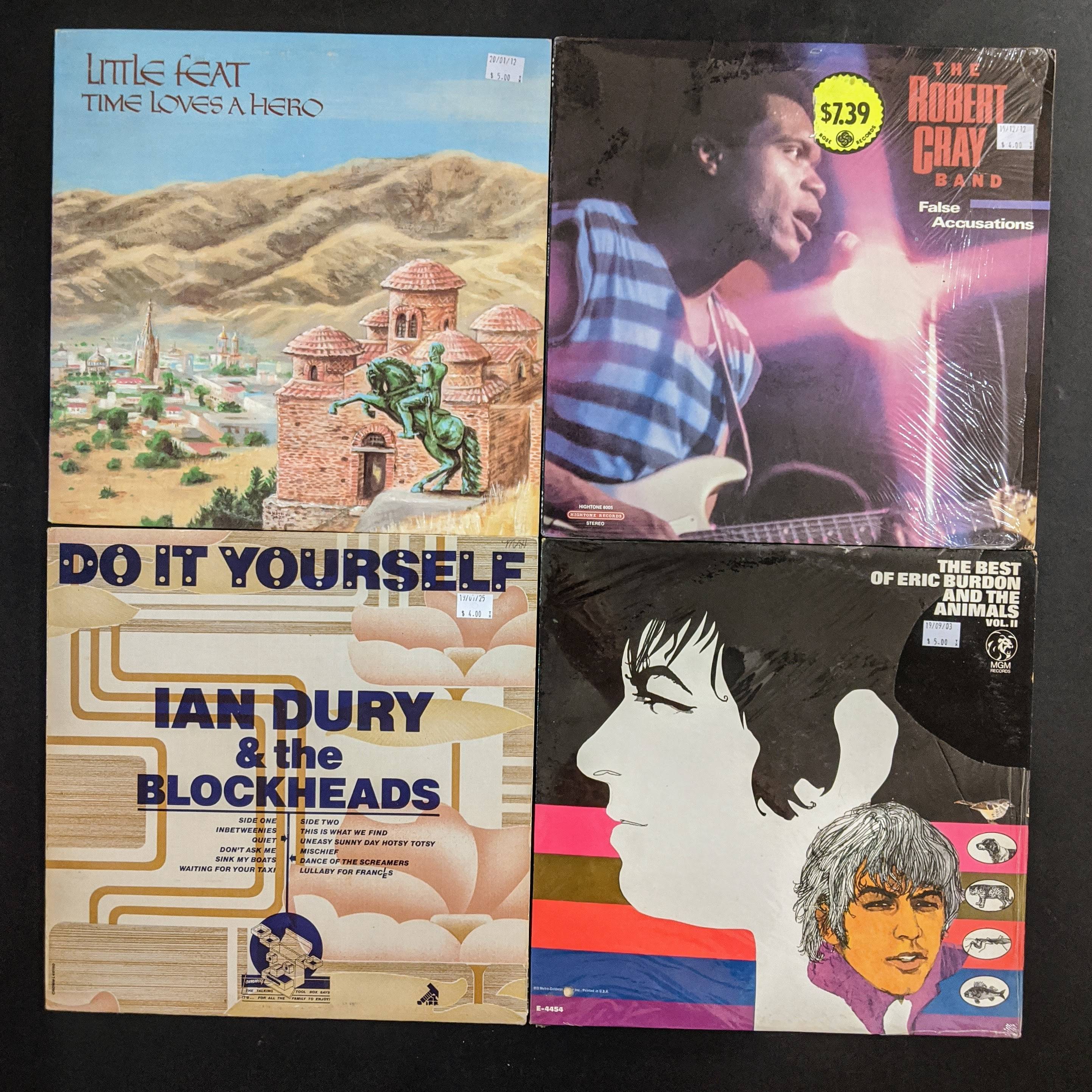 Hello everyone and welcome to another edition of Dom’s Digs. This is where I go through our Bargain Bins to find some cheap but worthy records for your collections. As we are still not open to the public and have been listing a lot of our inventory on to our webstore we wanted to give you guys access to the ton of good used records that typically sell for $5 and under. Not all good records have to be expensive you know? Okay, here are ten that I pulled today that need good homes.

1: $5 Buffalo Springfield: Retrospective. Great way to snag some of the best moments from this sixties group that featured Neil Young and Stephen Stills as members.

2: $3 Donavan: Barabajagal. I’d recommend any of Donavan’s sixties records, they’re all pretty good. This one from 1968 has him backed by The Jeff Beck Group on some tracks. Worth it for the title track alone.

3: $4 Bloomfield/Kooper/Stills: Super Session. Nice OG copy still in the shrink. A super session from a super group, almost, as the sessions were recorded separately but talking of Donavan, they do a great version of Season Of The Witch which has been sampled by Pete Rock and other hip-hop producers. Nice blues rock record.

4: $4 Allman Joys: Early Allman. Before the Hour Glass and Allman Brothers Band this is what they were up to. Signs of things to come for sure. Nice version of Spoonful among other blues tunes and some early Gregg Allman compositions.

5: $5 Little Feat: Time Loves A Hero. Another talent similar to the Allman Brothers whose band needs more props is Lowell George and his Little Feat band. There are some real nuggets spread across the first few Little Feat albums if you dig 70s rock with a bluesy, funky and country flavor. I like the instrumental track Day At The Dog Races on this one.

6: $4 Robert Cray Band: False Accusations. 80s blues records probably don’t have much appeal but I have a soft spot for Robert Cray and his first few albums. They’re decent albums, well recorded by a good band with good tunes. Blues and soul fans, do yourself a favor and snag these.

7: $4 Ian Dury & The Blockheads: Do It Yourself. The famous wallpaper cover album. What can be said about Ian Dury and Stiff Records that hasn’t been written already? Not much. An English folk hero and a label that birthed so many great artists. Pub rock done good.

8: $5 Eric Burdon & The Animals: Best Of. Vol. 2. A dozen crackers on this one. Nice copy still in the shrink. No home should be without at least one Animals record. This is a great place to begin.

9: $3 Stories: About Us. American group but in touch with the UK scene. Famous for the cover of Brother Louie, a song by Hot Chocolate about inter-racial love that was used by Louis C.K. for the opening of his TV show. Good early 70s rock in the vein of Badfinger.

10: $3 M: Pop Musik. Coming out in the dog end of the 70s and ushering in the new decade of pop sensibilities. Just a great Pop song, hence the title.

Okay, there you go. Check these out and give us a shout if you want any of them and remember to scope the Bargain Bin videos for additional records that won’t hurt your wallet but will please your ears. Cheers. Until next time.