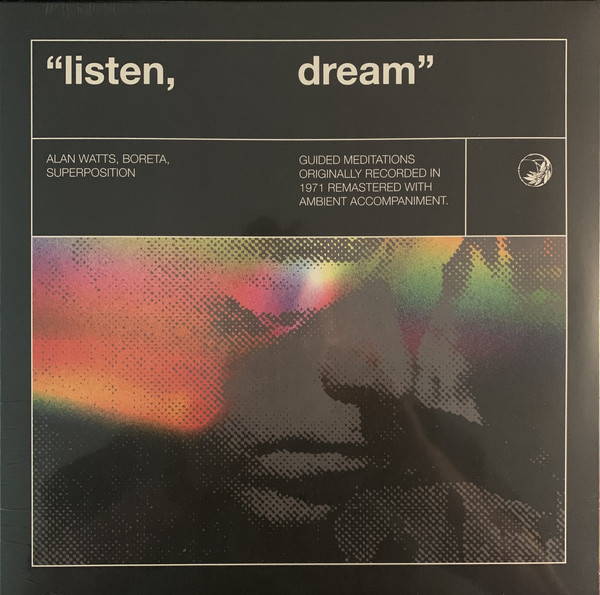 As I’ve mentioned before, Dominic has this habit of pulling things out of our bargain bin and handing them to me saying, “I think you might like this.” This is one he didn’t know much about, but had trouble pricing because of the lack information available online. Knowing I was into meditation, he thought it might be an interesting listen. Boy was he right!

This LP, as far as I can tell, takes a guided meditation recorded by Alan Watts in 1971 and gives it musical accompaniment, a swirl of Tangerine Dream-esque spaced-out synth noises. As I mentioned in a previous staff pick, I’ve been meditating for a while now, but I’ve been using the Headspace app. That app is very much like other meditation techniques I’ve used, which focuses on mindfulness and feels very modern and science-y rather than new age-y. Watts’ guided meditation has no problem drifting into new age-iness. First he has you focus on your breath and slow down, much like the meditations I’m familiar with, then he breaks down your ego, pointing out that what you refer to as your “self” is a mental construction, an abstraction. His voice is gentle but authoritative, and his accent makes me think of the kindly, elderly narrators on old British children’s TV programs. There may or may not have been mind-expanding substances helping the process along, but listening to this LP while lying on my couch in the dark, I had a full-on psychedelic experience. It was awesome.

The musical accompaniment is great too. Much of Watts’ guided meditation focuses on processing sound, so having the ambient music underscores his point while remaining unobtrusive. The b-side of the records contains instrumental versions without Watts’ voice, and while I haven’t actually listened to that I’m sure it’s a fine listen as far as this very spaced-out ambient electronic music goes.

I’m not sure if it’s possible for anyone out there to buy this LP… it’s just one of those things that fell into my lap. But I had share because this was, by far, my most intense musical experience of this past week. 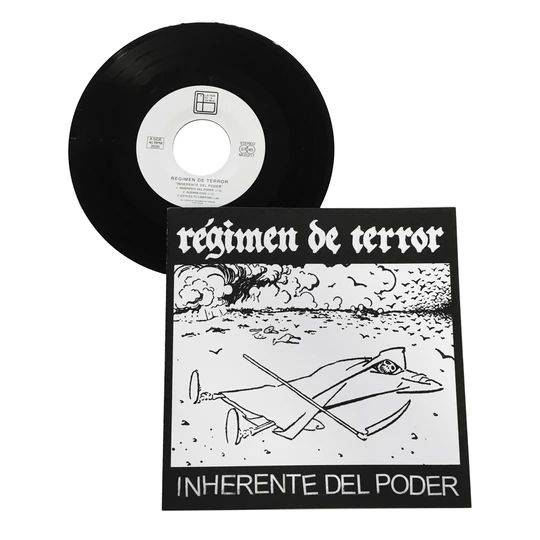 Raging debut EP from this new band out on La Vida. I’d never heard anything about this band, but because the lyrics are sung in Spanish, I wanted to know where exactly Regimen De Terror is from… After some brief research, it seems like they’re based out of the Basque Country. With so many bands nowadays adopting the “D-beat” moniker to describe their sound (which in some cases I think is totally inaccurate), it’s refreshing to hear a band totally nail the earliest conception of playing hardcore in this manner, and do it with spirit and authenticity. Regimen De Terror doesn’t seem like they would want to attempt to incorporate elements of metal or fill in gaps with layers of blaring noise. Rather, their approach to playing these songs, and particularly the production on this EP, comes across totally classic sounding and sonically truly reminiscent of the first 3 Discharge singles. Also, it’s not raging fast – it’s got what I call that “in-between” tempo going on. Now, I’m not sure if these notions I’m getting are reflective of the band making some kind of a mission statement. Like I don’t know if they’re “taking a stand” to try and sound this way and distance themselves from current bands that sounds more “slick”, but it’s more fitting for my taste regardless. All that said, and maybe I’m being blind sighted by the vocals, but alongside the clear early Discharge sound, there is an aspect of Regimen De Terror that brings to mind 80s Spanish hardcore like Anti/Dogmatikss. Anyway, this EP is 5 tracks (most of which don’t clock in much over a minute), and it rips. If you think that based on what I’m describing this will tickle your particular punk itch, then I highly recommend checking this band out. Killer! 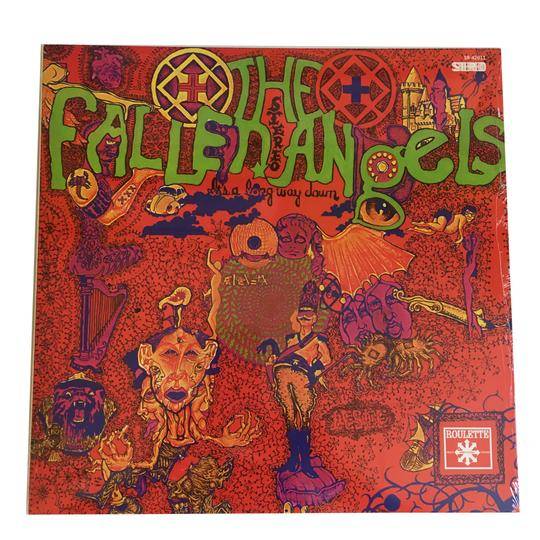 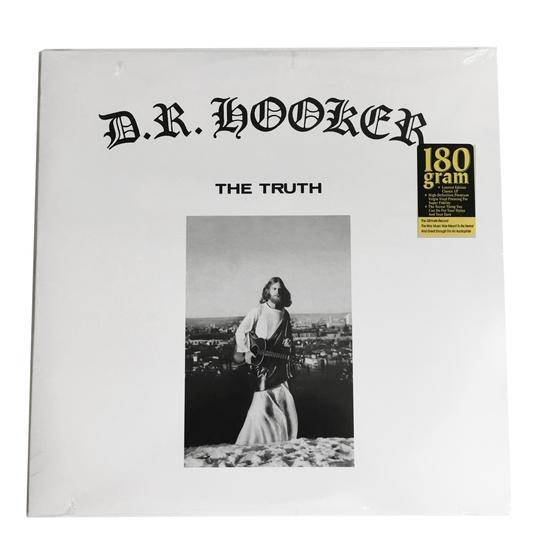 The Fallen Angels: It’s A Long Way Down. Roulette 1968

The Fallen Angels were a psychedelic group based in the Baltimore/ Washington D.C. area who recorded a couple of albums and singles in the late sixties. Their first single on Laurie was a minor hit and their new label, Roulette hoped that subsequent album would be a hit also and mirror the success of pop acts like Tommy James and The Shondells who were also on the label. Their first album was a good mix of garage and pop-psych sounds but was promoted more as a pop record and didn’t really take off. Most groups wouldn’t have been given a second chance but Roulette, to their credit, gave the Angels full creative control to make the record they wanted. The result is It’s A Long Way Down. It naturally bombed and the group were subsequently dropped. Over the years as interest in obscure records from this period grew both their albums became sought after items. The cover alone on this one is worth having and is a great example of psychedelic art work. As for the record itself, it’s not a crazy hard rocking psych record but one more in tune with work by groups like The Left Banke, Bee Gees and later Zombies with similar baroque touches. Other references would be west coast acts like Love, Common People and Kak who all have elements of this type of sound. I have enjoyed this record since first hearing it and luckily it is still in print and available at an affordable price and we just restocked a copy. I think in these weird times, slightly strange records like this are quite appealing and I would recommend you to investigate. As I said, it’s not a record to blow your wig off but rather something to reflect on late at night or early in the morning.

In recent years, knowledge of this lost gem has become more widely known but when I first saw and heard a copy it still had yet to be reissued and was a $1000 plus item on the collectors’ market. Apparently less than 100 copies were made as a private press record back in 1972. The cover would have you believe it is some kind of hippy or Christian rock record and you wouldn’t be far wrong with that assumption. But once the needle hits the grooves and first track The Sea begins, it soon becomes obvious that you are listening to something quite different here and a little bit special. Recorded back in 1972 in New Haven, Connecticut by Hooker, a reformed druggy hippy turned evangelical with a pick-up band of local musicians who were never heard of again. The group were presented with the material at the session and arrangements were hashed together and the whole album recorded quickly. The result is a true acid psych gem and one that has stood the test of time very well. Listening to the record, you could be forgiven for not nailing the ’72 recording date right away. Elements have a more late sixties sound, while other parts sound much more contemporary with a groovy and funky backing. There are several stand out tracks but for DJs, the song Forge Your Own Chains has a lot to offer. I was excited to score a reissue copy a while back and have often played this record at gigs and typically get someone coming up to the booth asking “ who’s this?” Luckily there are now several versions out there and we have an affordable version back in stock for you to check out. The Truth is out there. 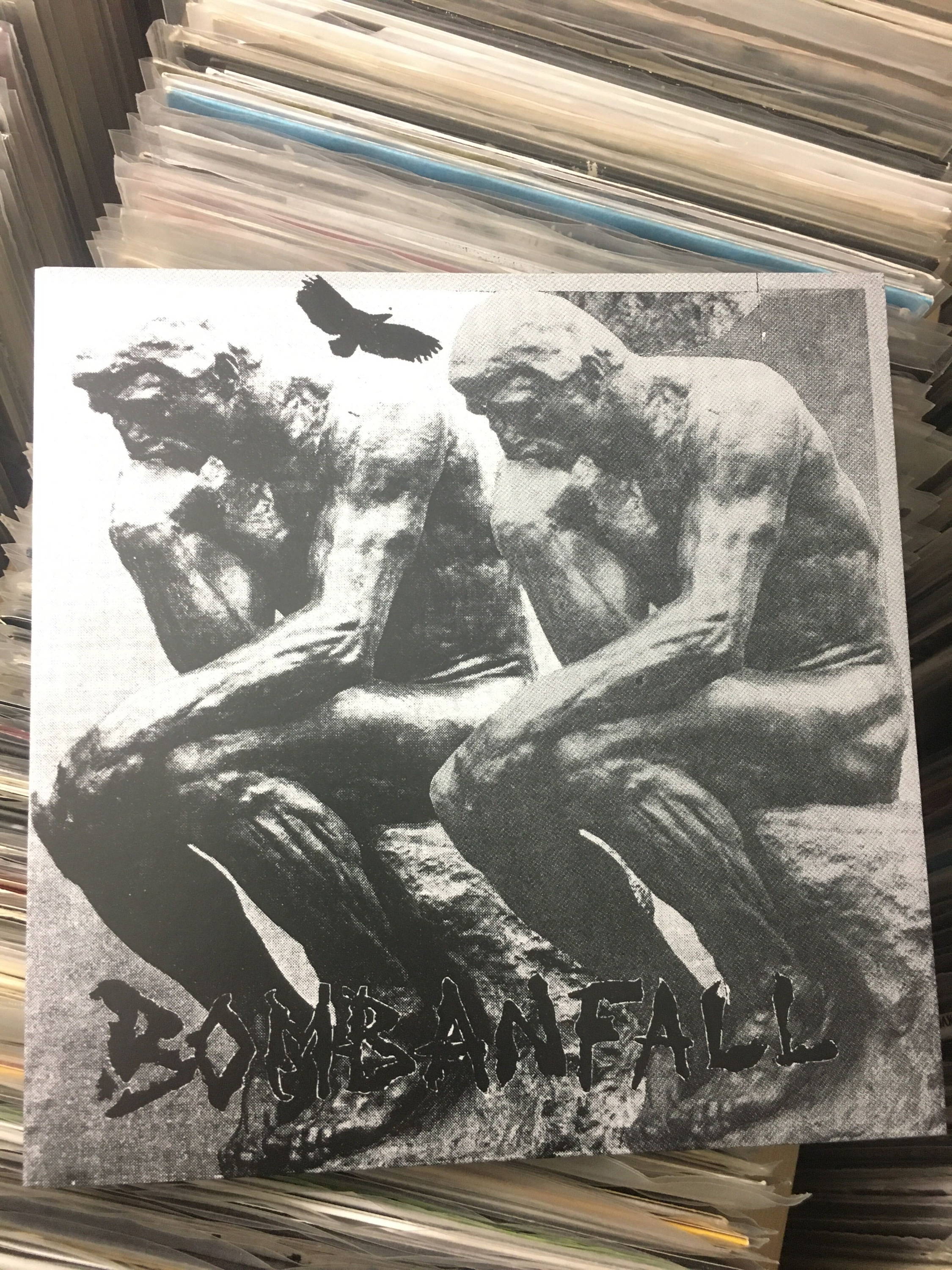 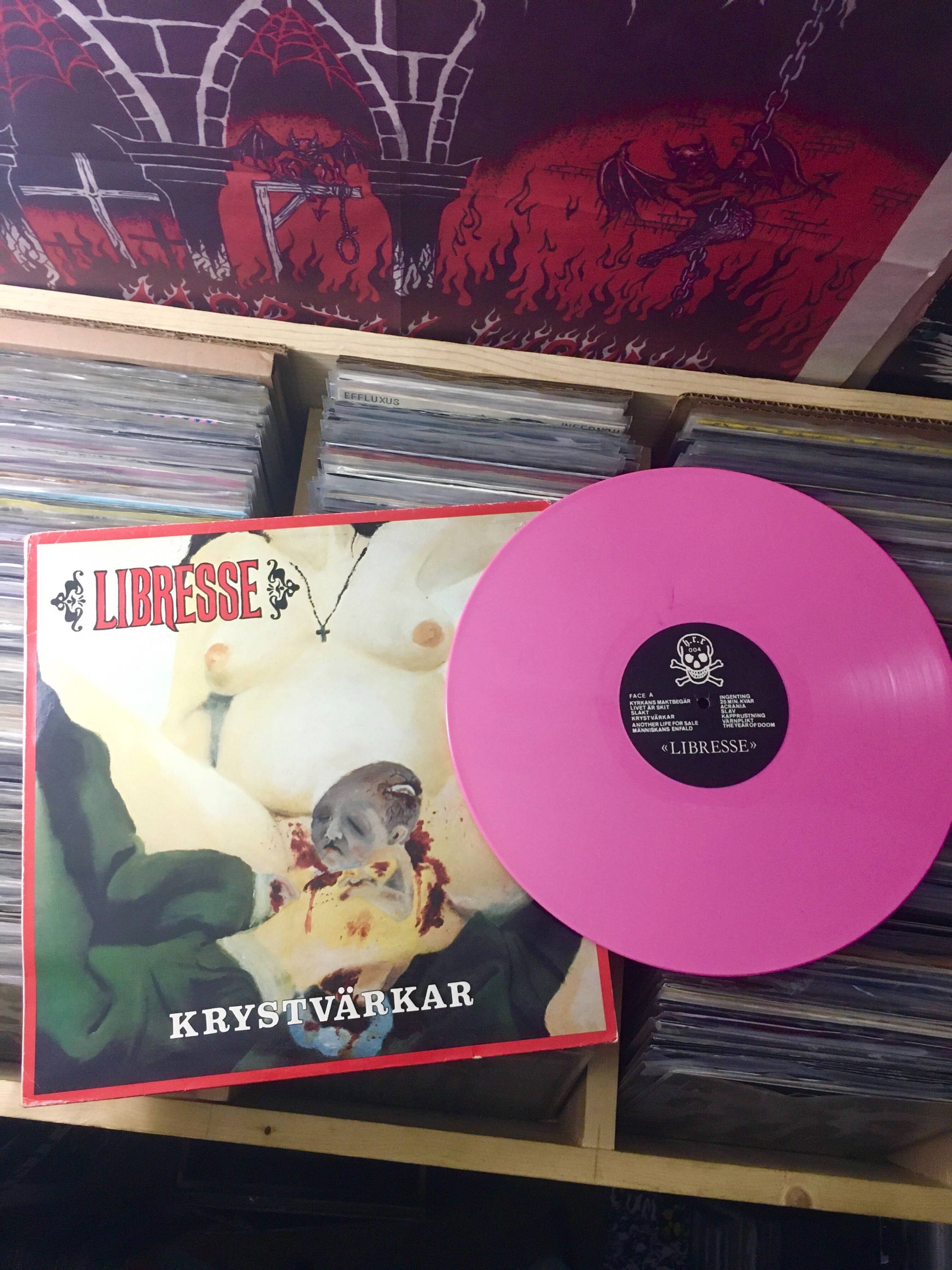 (I think Åsiktsfrihet translates to "freedom of opinion, but that’s just what the internet told me.)

If you know me it’s probably obvious I'd pick this one...I'm pretty sure the first re-issue sold out lightning fast from the label, so I'd jump on this repress quickly if you can! These reissue discs sound EXCELLENT. D-takt is NOT fuckin’ around. When I first heard this hot slab I was already pretty deep in Swedish HC. I didn't really think much about the late '80s in Sweden, but damn did hearing this change my mind..I'm not sure if this is common response to hearing this record if you’re following Swedish HC chronologically? It's got all the elements of kängpunk but has this extra "crust" edge to my ears. Bombandall remind’s me Svart Parad and Krunch (Hello Bob only I guess) a bit more than any other Swedish bands, but they sound like they could be direct influences to Doom and a shit ton of bands onward. I am not well-rounded on the late '80s/early ‘90s so who knows. I love the drums on this recording, the toms cut through like mad. The slow intro leading leading into the bombardment..maybe they like Amebix? haha or Part 1 (also UK)... Not that it matters cos the entire EP rips, but holy shit the second track "Ögon I Mörkret" (Eyes in the Dark) blows the fuckin doors straight-off. The chorus part. Jesus. Then straight into the second track with mid-paced swingin like mug Discharge-beat. Perfect... Do I need to continue with the B side?? You've probably already heard this EP, and if not hopefully you've heard enough from me to just grab it. Cos you wont regret it. That import price is a lot, it sucks, but I will say this reissue was done beautifully and with authenticity.

Speaking of late '80s Swedish HC, here is Libresse: Krystvärkar LP. I really cannot remember when I first heard this record but it caught my ears right from the start, although it tested my threshold of "weirdness" soon after. At first, I thought they were from Norway cos they remind me of So Much Hate with their tendency to chain tempos/rhythms often. The LP maintains a ripping HC baseline, while some parts are overwhelmed with heavy melodic elements, and there are a lot of change-ups. This record came out in 1987, the same year as the Bombanfall EP. (I do know this was recorded in '86 though, I am unsure of when Bombanfall recorded their EP.) It was released on Hard Core Horror Records. They released some Anti-Cimex material but also Black Uniforms. The drummer of Libresse played on the earlier Driller Killer records. The guitarist of Black Uniforms and Driller Killer, Cliff, was also a later member of Cimex. Oh, Hard Core Horror also released D.N.A., who shared the same vocalist from the Anarkist Attak EP. Sorry, I'll stop nerding now and go back to the music. I said this album tests my threshold of weirdness. It's cos they have same parts that sound like straight-up black metal, and also parts that sound almost folky/Nordic or something I don’t even understand the routes of, haha. I suggested this record to Ava cos of these elements and it's funny cos yesterday I was playing this in the store and Dominic said it sounded like something Ava would like. Some songs certainly took many listens to grow on me, but the thing is that every song has some really cool ripping shit you can look forward to. The songs are not very short, and they have many passages from head-banging mid-tempo, to insane starts and stops, to groovy d-beats, to blast beats... it's truly like no other record I know. I think usually when a band tries to “fuse” that much shit together it just comes out so bad. I wish I had an insert with my copy, I wanna know some more about this graphic cover, cos it’s kinda ridiculous. My copy is so warped its unbelievable it can play without skipping. It’s the kind of condition you gotta leave to room to play the record cos you have a roller coaster of anxiety hoping the needle doesn't kick off as it spins. Anyway, I think this LP is definitely worth a listen - check it out! Peace.