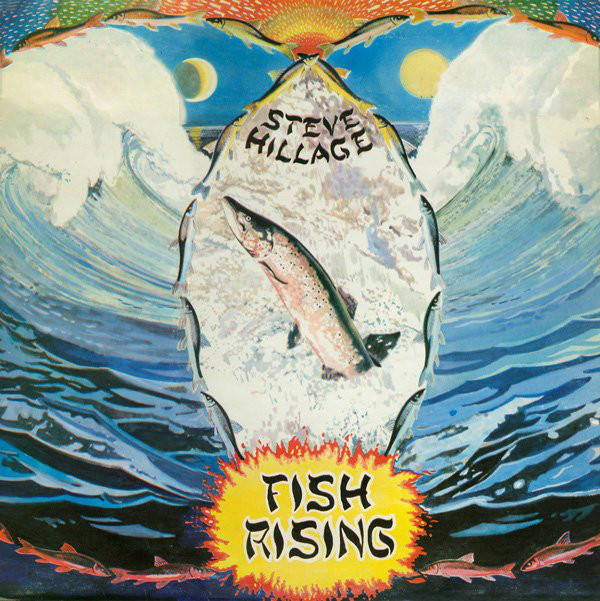 This week I have another LP that Dominic tipped me off to when a used copy came through the store. I love extended psychedelic guitar freakouts, and this title supplies in spades. While I see it’s categorized under “space rock” on Discogs, it reminds me less of the tripped out, stoned vibes of Hawkwind or early UFO and more of the frantic orgy of notes I associate with the first few Mahavishnu Orchestra albums (particularly The Inner Mounting Flame), which I also love. Sure, it’s a little looser than that, more rock and less jazz, but if you like John McLaughlin’s style this is worth checking out. For my money, there’s not a dull moment on the record.

As a side note, when I was reading about this album online, someone pointed out that in an episode of The Young Ones when they’re having a big party, someone trashes some of Neil’s records and he says “oh no, my Steve Hillage!” That prompted a moment of reflection, recognizing that I’m now listening to Neil’s music rather than Vivian’s or Rick’s… 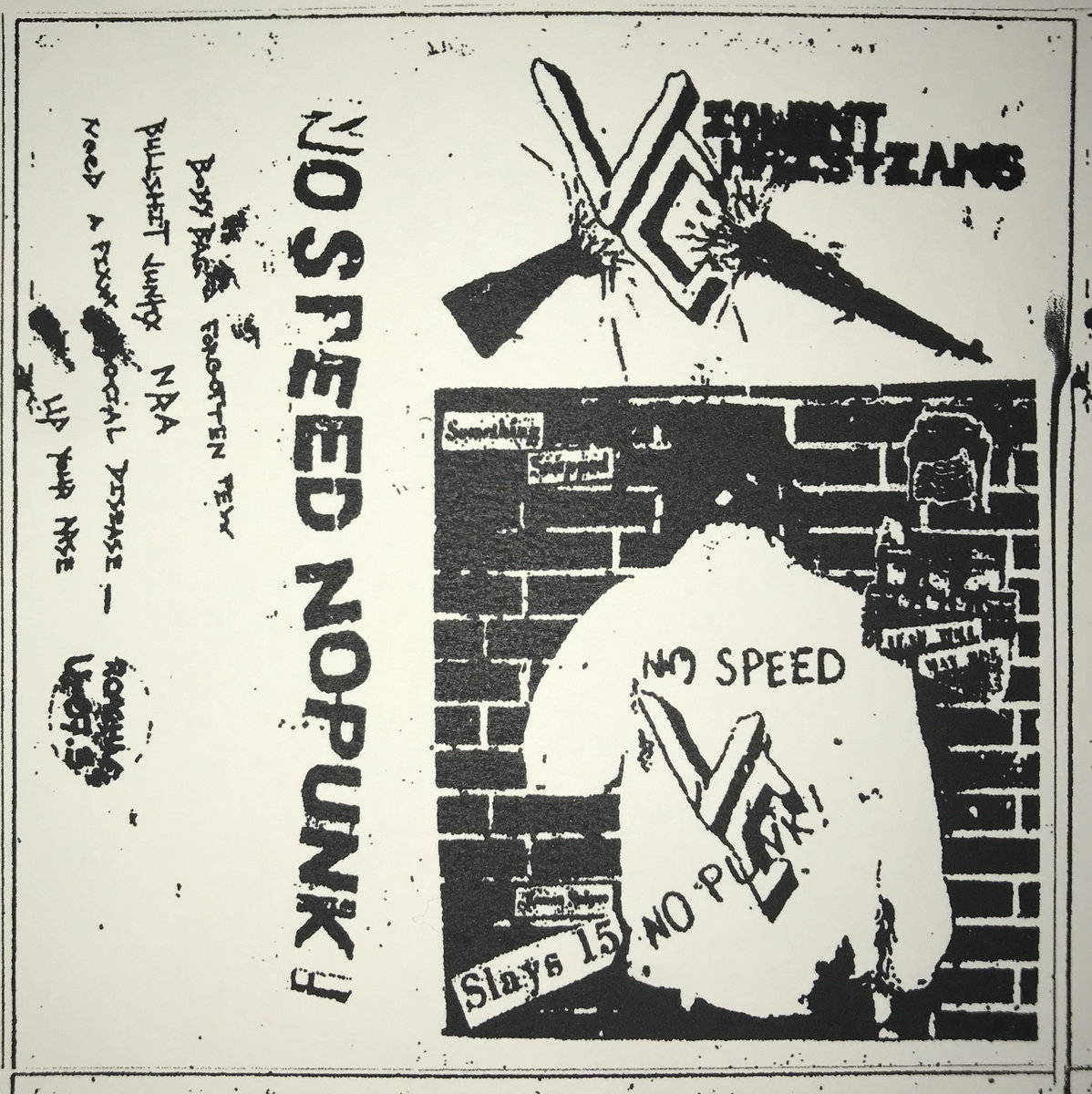 Violent Christians: No Speed, No Punk! demo (Roach Leg) I just heard this band for the first time the other day. Roach Leg put this tape out and we should be getting copies for the store pretty soon. I don’t know why, but all I’ve wanted to hear lately is pissed, mean, sloppy and irreverent US hardcore. Violent Christians are really scratching that itch for me at the moment. I’m honestly sick of hearing the phrase “d-beat.” I don’t care anymore. I dunno much about Violent Christians. I think they’re from Texas? No guitar solos. No metal. No cliché mosh parts. Most songs are under a minute. Sign me up. Perfect band to crush beers to while you’re quarantined in your room at 3am. 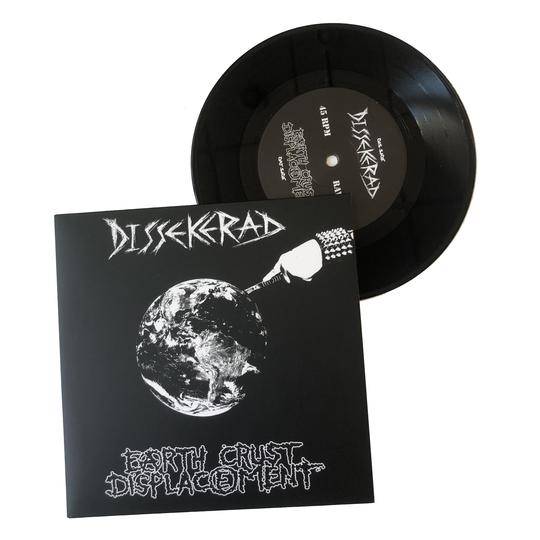 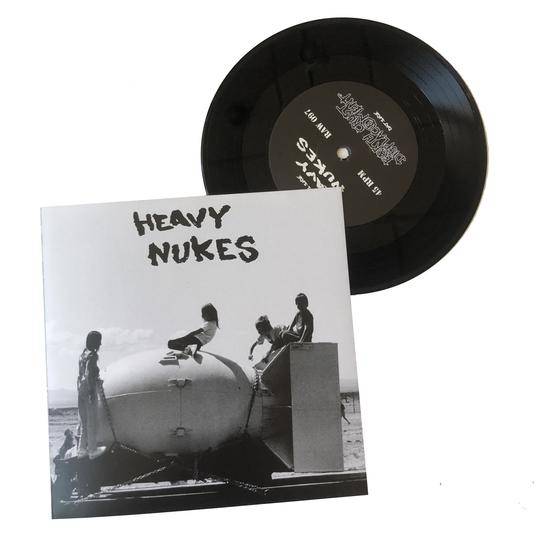 Dissekerad / Earth Crust Displacement: Split 7" (Rawmantic Disasters) Who would have thought I'd be recommending TWO (see next pick) split 7"s! I'm loving the first track on Dissekerad's side, "Slakten's Massor." Straight up mid tempo Swedish hardcore at it's finest. Caveman D-beat. Dissekerad features an all star line-up including legendary Swedish frontman, Poffen, on vocals. His vocal style is so recognizable that the guttural sound of it has become a staple of the genre. I had never heard ECD before throwing this record on the turntable, I'd be lying if I said I wasn't a little bit more into the Dissekerad side, but ECD is crushing and menacing. Absolutely recommended for fans mangel and/or folks who like their dis-rock a little crustier.

Heavy Nukes / Earth Crust Displacement: Split 7" (Rawmantic Disasters) Heavy Nukes deliver 4 insane tracks of explosive Shitlickers style Swedish D-beat. It's easy for stuff like this to sound pretty uninspired and monotonous to me, but Heavy Nukes doesn't feel that way. It feels like they have perfected the art of classic Swedish D-beat hardcore and turned it into a modern beast in the 21st century. The ECD tracks on this are also ripping and crushing as ever. I think Heavy Nukes and ECD pair just a little bit better than Dissekerad and ECD, making this split feel a bit more on brand as a contemporary crasher crust hit. The tracks on this split were recorded in the same session as their split with Disease and include a cover of German band, MxVxDx.

No streaming links for these, sorry! 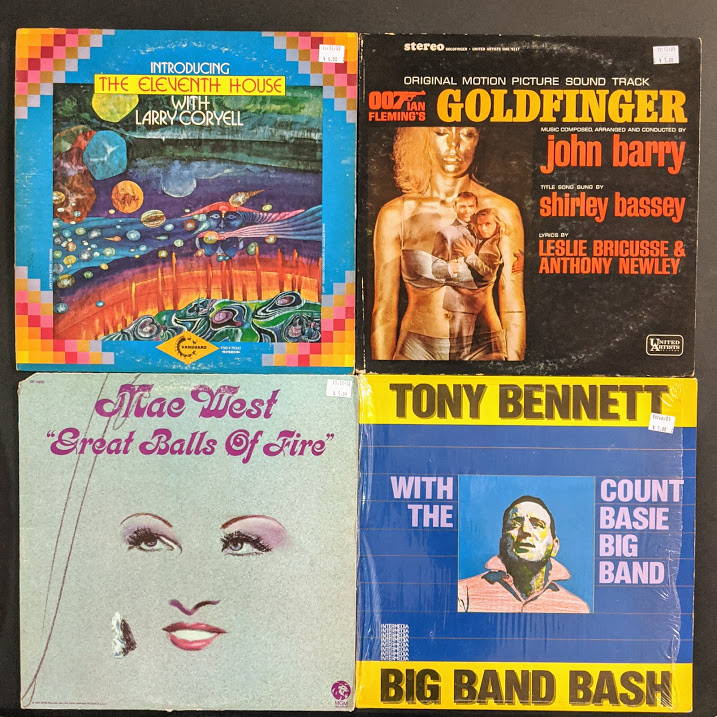 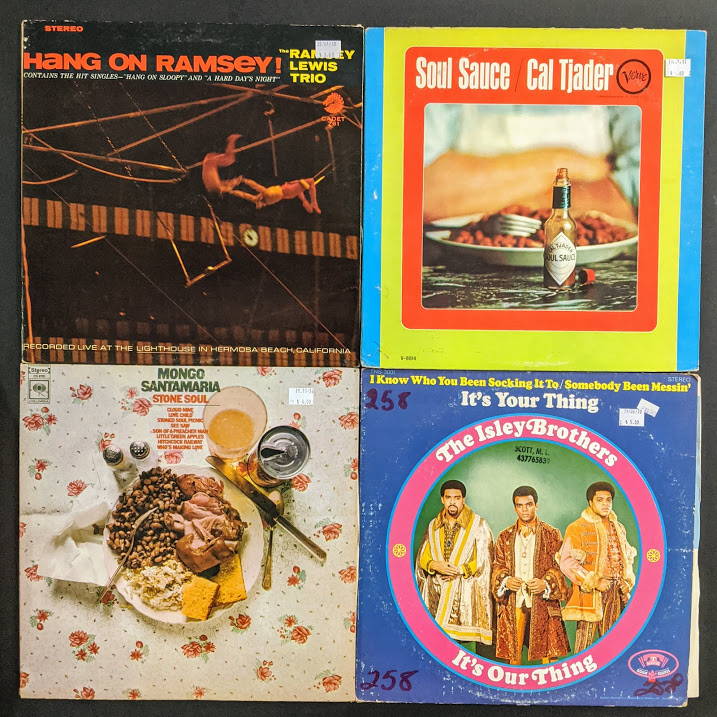 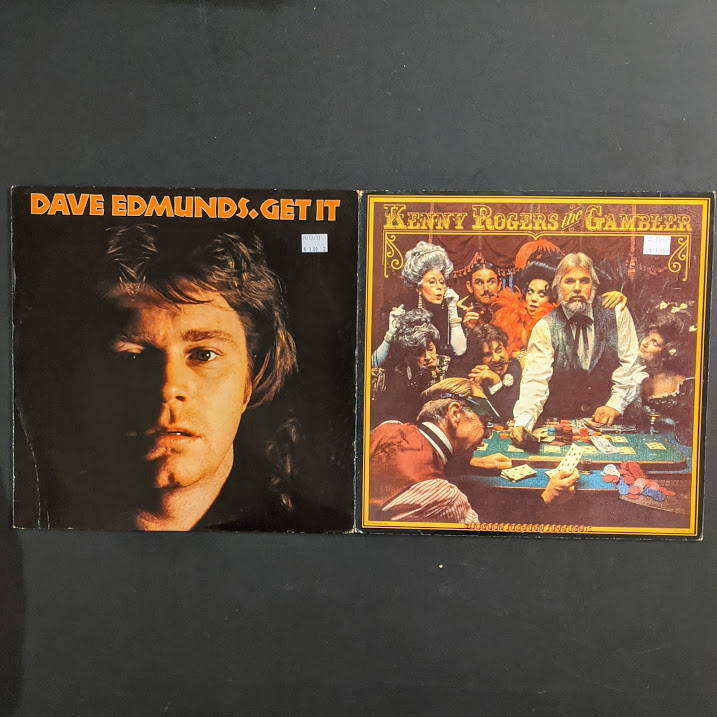 Hey there friends and music lovers, how are you holding up? I hope well.

With the social distancing still in full effect it seems like people have been busy. There are a ton of podcasts, mixes and shows going up from all corners of the world and many of them are excellent. Add to that all the other stuff to watch and to read and you barely have enough time to get through a fraction of it despite being home with all this apparent free time. I don’t know about you but I feel overloaded and have actually been trying to consume less during this period and just stick with what I know and what I already have. That for me is records and they will always be my go to for entertainment and enrichment purposes. So, between listening to the records we have been putting up on the store and digging into my own shelves I have gone through a lot of records and have had little time for much else. Maybe a little TCM at night, I do like my old movies but mostly music. Anyway, this time made it more than clear to me what great value records are. You get the music, the artwork, the information and can hold it and feel it and enjoy them time after time if handled and stored properly. They also don’t have to cost a fortune. Growing up, part of the appeal with records was that no matter how much money you had it was always possible to round up enough to get something cool. Good record stores then and now always catered to both ends of the budget scale. The mark of a good store should be that whether you spend just a dollar or a few hundred, either way you come away with a decent record. At Sorry State Records, I think we do a good job at that. Since the shutdown, we have been listing lots of our used records for you and will keep going with that but one area of the store that we wanted to try and give you access to is our great Bargain Bin section. This is where we have records priced $5 and below. There are so many good records that don’t go for much but are just as good as those rare holy grail types and can give you just as much pleasure for a fraction of the cost. Most often with the bargain bins it is a chance to pick up solid back catalogue titles and best sellers at affordable prices. We have lots of those.

So very briefly without any more blather here are ten titles, in no particular order, that I just plucked today that are worthy of being in anyone’s collection. All priced between $2 and $5.

2: GoldFinger Soundtrack by John Barry. United Artists 1964. What’s not to love about this? One of the best Bond title tunes, sung by Shirley Bassey. One of John Barry’s finest. Plus, a cover with cool Bond images including Honor Blackman as Pussy Galore. Come on.

3: Mae West: Great Balls Of Fire. MGM 1972. Yes, that Mae West. She made a couple of these records backed by a swingin’ beat combo. Covering mostly 50’s rock ‘n’ roll songs, there are a couple of cool numbers on here and you get Mae still doing what she always did best, sexy innuendo and double entendres.

4: Tony Bennett with Count Basie Big Band: Big Band Bash. Intermedia Records 1982. Not sure when this was actually recorded but it sounds great. Really swingin’ stuff and both band and vocalist were on top form. Class.

5: Ramsey Lewis Trio: Hang On Ramsey! Cadet 1965. I love this record so much. Prime Ramsey Lewis Trio recorded live at the famous Lighthouse in Hermosa Beach, California. He covers two Lennon & McCartney tracks among the repertoire of other current pop hits and originals. A great listen start to finish. If you are not picking up every Ramsey Lewis record you see on Cadet, you should be.

6: Cal Tjader: Soul Sauce. Verve 1965. The record that introduced me and most others to the talents of Cal Tjader and the joy that you feel when you listen to him play the vibes. His records combine just the right mix of jazz and Latin grooves and always hit the spot. Perfect mood music. This record is dripping in pedigree. Recorded in part by Rudy Van Gelder at his studio and featuring among others, Willie Bobo, Kenny Burrell, Donald Byrd, Grady Tate, Armando Peraza as musicians. Such a great record and holds up to the best.

7: Mongo Santamaria: Stone Soul. Columbia 1969. Keeping on the Latin tip with this great funky and soulful album. Again, a who’s who of musicians playing on it including Bernard “Pretty” Purdie on drums. Nice versions of See-Saw and Cloud Nine among other pop and soul covers, all with great Latin percussion.

8: The Isley Brothers: It’s Your Thing. T-Neck 1969. Killer funk and soul from The Isley Brothers on their own label. You get the title hit and a lot of other great tunes. I always liked I Must Be Losing My Touch and Don’t Give It Away off this one. Some cool down tempo ballads too.

9: Dave Edmunds: Get It. Swan Song 1977. Classic late seventies Rockpile production. Dave pretty much played and sung everything on this one and it’s full of 50’s influenced rockers with hooky guitar parts-a-plenty. This is a fun record.

10: Kenny Rogers: The Gambler. United Artists 1978. We only just dipped our toes into the rock and country records but let’s wrap it up at ten with this classic. Nothing needed to be said. Respect to Mr. Rogers. This one has a great cover and that title song and a couple of other half decent songs. The Hoodooin’ Of Miss Fannie Deberry is Kenny doing Tony Joe White and getting all swamp funk groovy.

Alright, there you go. Ten records pulled from our Bargain Bins that are fully guaranteed to be ace and will set you back about $35 if you bought the lot. That’s pretty good value. Get in touch if you want them.

These are only a few bucks each, so just buy or look it up on YouTube your dang self! 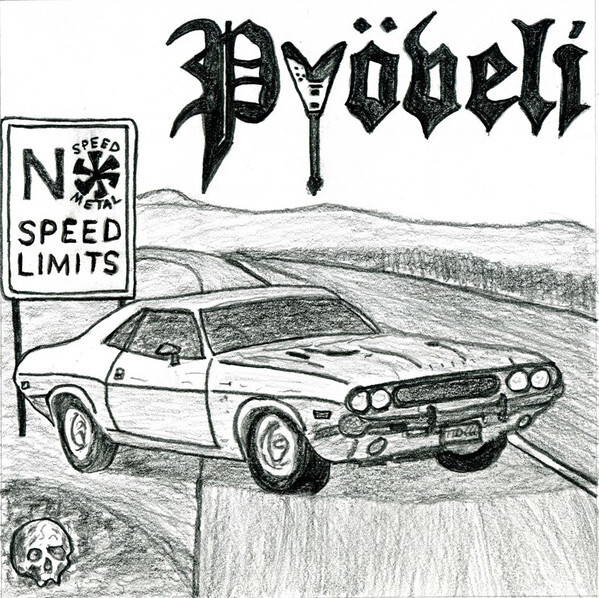 Maniacal Finnish duet Pyöveli are here to melt face with their fourth full length "No Speed Limits". Released in early 2019 on Headsplit records, these brothers have presented to us a 28 minute long underground masterpiece that will appease the mind of any old school thrash/speed maniac. For Fans Of: Sodom, Deathhammer, Mutilator