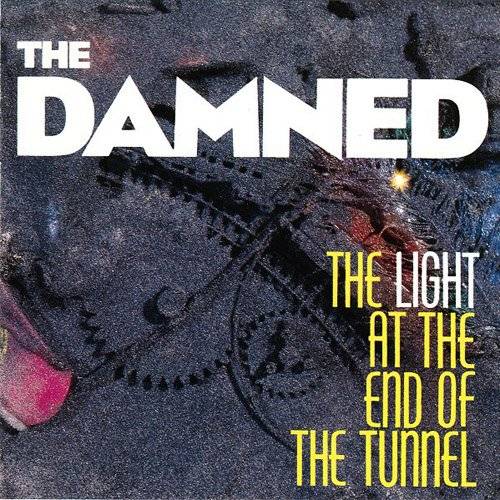 The latest issue of General Speech, along with Halloween inching ever closer, has me listening to the Damned. Tom from General Speech’s list of 20 underrated non-album tracks had me reaching for the Friday the 13th EP and the Damned But Not Forgotten compilation, and those releases gave me a hankering for The Light at the End of the Tunnel, a weird as hell 1987 compilation that has a special place in my heart, even though the CD copy I got 25+ years ago is long gone.

I remember ordering The Light at the End of the Tunnel from Columbia House when I was quite young. It must have been 1992 or 1993, just as I was digging past the MTV-approved grunge that was taking over the world. Mostly I was finding pop-punk, and I listened to my fair share of Green Day and NOFX and Screeching Weasel around that time. However, as one of the few recognizable punk names in the Columbia House catalog, this release from the Damned made it into my possession. I had no idea, but it’s a very strange introduction.

Looking atwhere the Damned’s critical legacy has landed, The Light at the End of the Tunnel offers a track list that is, shall we say, idiosyncratic. The compilation came out on the Damned’s then (major) label, MCA, and perhaps that’s why the band’s albums for that label, Phantasmagoria and Anything, are so well-represented. The collection starts off with “I Feel Alright” from the first album (starting with a cover rather than an original is only the first of many strange choices the compilers made), then segues into the title track from 1986’s Anything, followed by two non-album singles, 1982’s “Lovely Money” and 1984’s “Thanks for the Night” before the next album track, Machine Gun Etiquette’s brilliant “Plan 9, Channel 7.” The track listing doesn’t just ignore chronology; it seems deliberately chaotic.

On the surface, The Light at the End of the Tunnel seems like that nonsensical music industry monstrosity, the “greatest hits / rarities” compilation, which pairs an artist’s best songs with the chaff that wasn’t considered good enough for the higher-profile releases. The thing is, though, that despite its length and breadth, The Light at the End of the Tunnel never dips in quality. The Damned put out several classic albums, but their non-album singles and EPs hold some of their best songs. And while it’s weird that there are three covers here, it’s hard to deny that the Damned had a knack for transforming other artist’s material, as apparent on their version of Love’s “Alone Again Or.”

Speaking of Love, if I can discern any sort of organizing principle for The Light at the End of the Tunnel, it’s that it emphasizes the Damned’s roots in pre-punk pop and psychedelic music. I’ve spent a lot of time with the Damned’s first five albums, and even though this release contains a lot of those songs, you end up with a different impression of the band than you get from listening to the albums. The Light at the End of the Tunnel is missing some of my favorite songs (how do you leave off “Wait for the Blackout?”) but, by omitting so much, it reveals the Damned’s surprising depth. Amidst all the punk bashing and crashing, there was a sophisticated, thoughtful pop band lurking below the surface.

The Light at the End of the Tunnel also shows how the Damned love to stretch out. The collection is littered with four and five-minute tracks (even the single “Grimly Fiendish” appears in its 12” extended mix). The most stretched-out moment, though, is “Curtain Call.” This track took up the entirety of side 3 of 1980’s The Black Album, but the Damned’s US label I.R.S. omitted the track for their single-disc version, which is the version I have. “Curtain Call” is a great song… besides the psychedelic wanderings you would expect from a track of its length, it has a great chorus with one of Dave Vanian’s most memorable vocal performances. Including “Curtain Call” is a big part of what tilts The Light at the End of the Tunnel toward that portrait of the Damned as sprawling and grandiose, but it’s also a big reason why I’m still revisiting The Light at the End of the Tunnel all these years later. 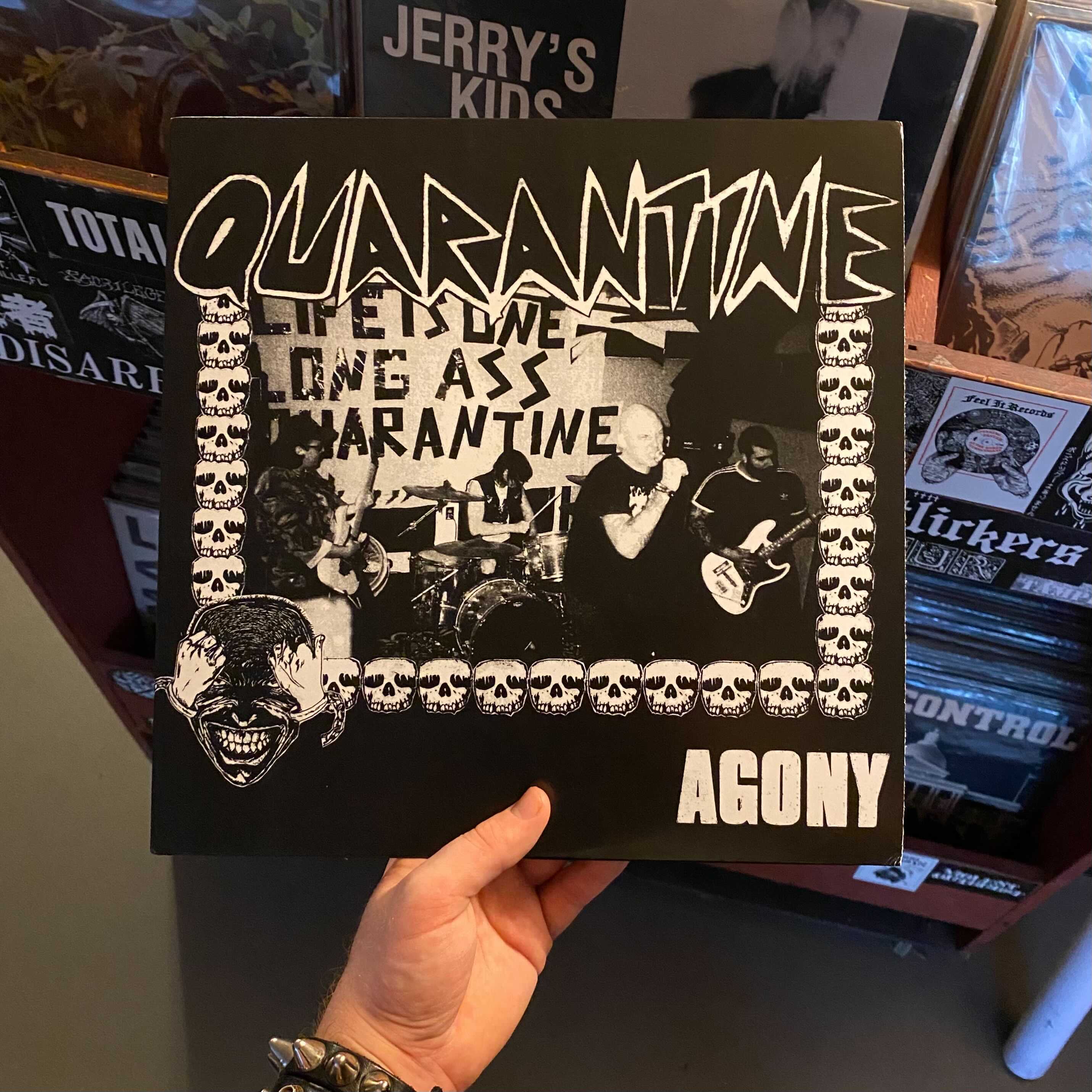 It’s been quite a journey to let my body and mind readjust to normal routine after this past weekend. Daniel, Usman and I have returned from playing a gig in Asheville with the almighty Warthog. I had a blast, and appreciate the dudes in Warthog for traveling to come play NC’s little mountain town. The gig itself was way more packed than I expected, and it was definitely overwhelming considering that’s the most people I’ve been in close proximity with in about 2 years. Between the rager of a gig, hiking to scale huge waterfalls, and chilling hard with old friends, I gotta say that I really needed that. Plus, I got tested and am covid-free!

Now on to important matters: this new Quarantine LP. I’m going to attempt to withhold some excitement and not totally dork out. Seriously though, I think this is one of the best hardcore records I’ve heard in years. When I first listened to Usman’s test pressing he received a few months ago, I remember my mind being blown at just how different it sounded. Agony manages to ride that balance between incorporating incredibly weird elements into the music while also remaining firmly rooted in traditional, tough-as-nails hardcore punk. It’s clear that the 4 dudes involved are just capable of putting together songs that have moments of mind-blowing and unexpected complexity, but also clearly just wanna let it rip and melt faces. The guitar work has me drooling at every turn. These moments of ambient dissonance that make me feel like aliens are invading are really just a tasty, thick bonus layer atop the shredding riffage. The drums are just insane… in the pocket and nasty, but also so tasteful. Also, the singer Jock’s vocals are just perfect. There’s no weak moment, he’s unrelenting and mean as fuck. Plus, the songs have so many hooks that it’s like they went fishing for ‘em. I can’t stop my brain from repeating, “MEDIA.PSYCHOSIS. MEDIA. PSYCHOSIS.” If I understand correctly, I think Quarantine is mostly Jock’s whole deal. I believe he’s a transplant to Philly from Boston. And like, if he does have a heavy hand in the songwriting, then it makes total sense because I definitely hear some MASS hardcore creeping in. The rhythmic style of the riffs reminds me a lot of Out Cold – and I’m not just saying that because I love Out Cold, I really do hear it. Now we gotta address the elephant in the room: in the midst of all the ripping hardcore, there are synth interludes. Yeah, you heard me. Which I dunno, to me at first this just seemed super off-brand? But somehow it fits. It’s almost like the interludes function less like something funny and more like creepy, minimal atmosphere that adds to the menacing personality this LP exhibits. I didn’t know I wanted a creepy synth version of “Lost” by Jerry’s Kids, but now I’m happy that it exists.

So yeah, clearly I’m really into this LP. Honestly, the sheer amount of content jam-packed into this LP might be kind obtuse and difficult for the general hardcore fan to absorb. Personally, I find it exciting. This band will lead us into the future.

No more blabbering from me. As always, thanks for reading. 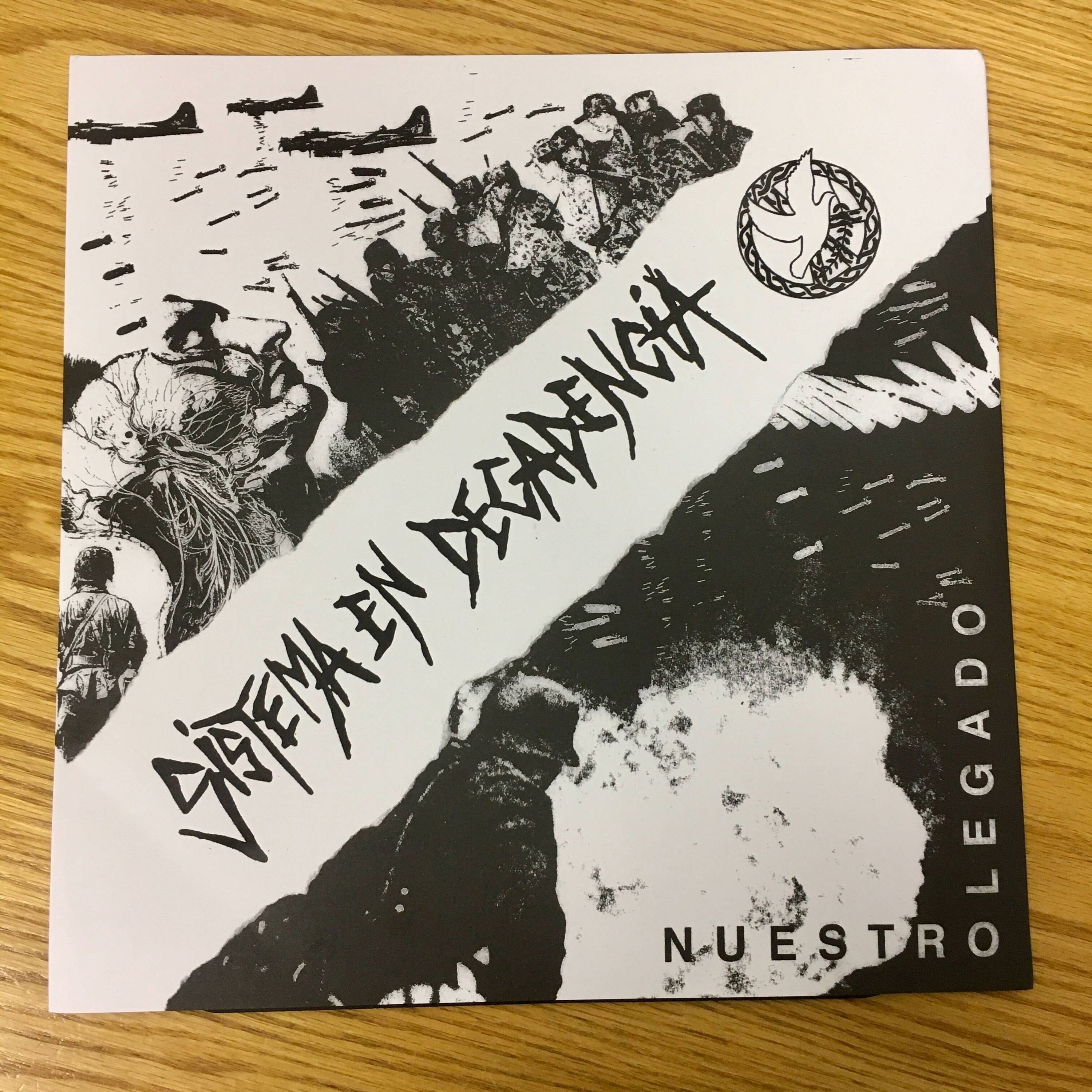 Hello and thank you for reading,

I don’t really have a nice write-up for you. I realize it’s been a long time since I did some deep nerding too, but I have just been too busy to set time aside. I’ve packed up a lot of the SISTEMA EN DECADENCIA 12” so I tossed it on last nite. Shit man, I was not ready for what this hot slab is packing... It is so fucking noisy, like shimmering in noise. Not in a lo-fi way, though; it sounds good. Haha yeah I don’t like lo-fi kinda shit. Being a noisy band doesn’t do it for me on its own either though… this band is fucking pummeling. The drumming is insane like MOB 47-style fast but still somehow has a little groove? I’m playing the bandcamp page now. Maybe the stereo here sucks or maybe the LP sounds way better than the digital. I listened to the LP at the shop yesterday and the sound was insane. If you like bands like GLOOM or COLLAPSE SOCIETY, this is right up your alley. You can grab a copy from our webstore here. Thank you for reading, peace!