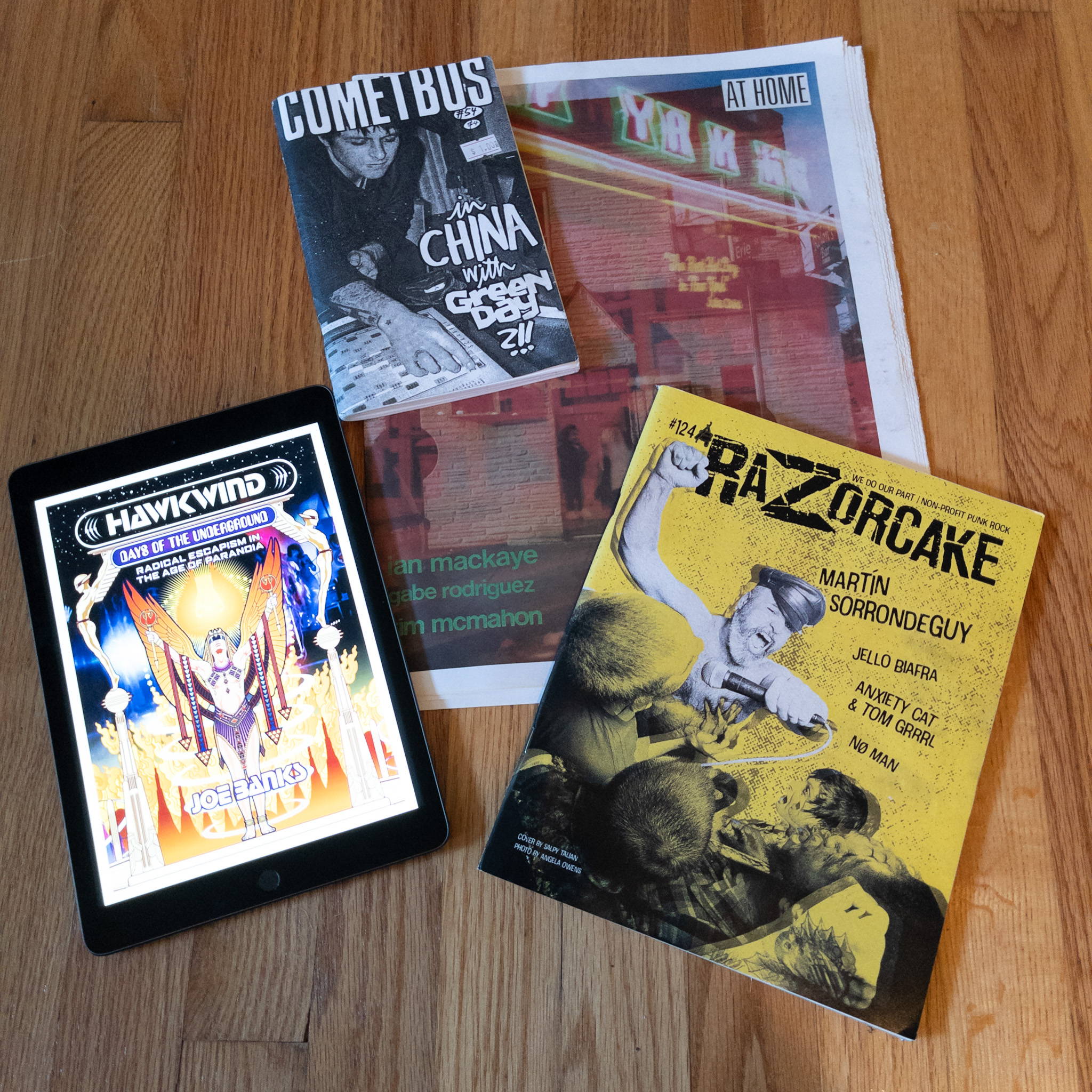 This week I thought I’d give you a quick roundup of what I’ve been reading (besides the new issue of Razorblades & Aspirin, of course, which I cover in the Featured Releases section). As a wise man once said, check it out!

The other day Jeff was tidying up around the store and produced a few copies of this issue of At Home zine. I’m not sure where they came from… perhaps the editor sent us a couple of freebies? I apologize for not getting back to whoever gave them to us! I hadn’t heard of the zine before, but an interview with Ian Mackaye was enough to draw me in, and I’m glad I investigated further because there’s some quality reading here. My favorite pieces are the interviews with Mackaye and Tim McMahon of Mouthpiece. I’ve read plenty of interview with both of them, but these interviews focus on shows both musicians played in South Carolina in the 90s, which provides an interesting angle. It made me think a lot about my own experiences going to shows in Virginia and North Carolina in the 90s, and I even went over to the Fugazi live archive to sample the audio from the first time I saw Fugazi live (Norfolk, Virginia 1995). I’m not sure how to get this zine, but if you see it, grab it.

Razorcake is such a steady presence in the punk scene that it’s easy to take it for granted, but I still check out every new issue. (It helps that they always send a big stack to Sorry State for free, which we then hand off to our customers.) This issue’s cover star is Martin Sorrondeguy, and he’s another person whose perspective I’m always interested in hearing. Here he talks with Michelle Cruz Gonzales of Spitboy, and as you might expect, the conversation is fascinating. Martin’s lengthy interview is reason enough to grab this issue, but as usual Razorcake is crammed to the gills with interesting art and writing.

About a year ago, when I got COVID, my friend Shane in Portland sent me a cool care package full of books, records, and zines to keep me occupied while in quarantine. (Thanks so much, Shane! I miss you, buddy!) Unfortunately, the package didn’t arrive until just as I was finishing my quarantine, so it’s taken me some time to look at everything, and one of the last pieces was this issue of Cometbus, a 2011 issue which chronicles Aaron’s trip to Southeast Asia with his old buddies in Green Day. I wrote about the most recent issue of Cometbus a while back and I was surprised how much I liked it. I’ve been aware of Cometbus forever, but I’m not sure I’d ever sat down and read an entire issue before then. I loved that issue, and I loved this one too. While I don’t have an inherent interest in what Green Day was up to in 2011, Aaron’s reflections on how people and friendship evolve over decades is fascinating, and I devoured all 97 pages in two sittings. New addition to the to do list: read more Cometbus (though I’m still terrified of the tiny handwritten text in the Cometbus Omnibus that has lived on my bookshelf for well over a decade now).

I’m only about halfway through this book, which one of Sorry State’s Instagram followers recommended after I posted about Hawkwind’s Hall of the Mountain Grill album. The book is dense with information about Hawkwind and I’ve learned a lot, but despite its density it’s a light read that keeps the pages turning. The writer has a strong sense of Hawkwind’s contribution to rock music and to British culture, infusing the book with a fan’s enthusiasm without drifting into hagiography. I wish Banks took as much time setting the scene as some rock biographies I’ve read. The book jumps right into the beginning of the band with little attention to the members’ lives before the group, and a minimal portrait of the London counterculture from which they emerged. I’m sure plenty of music heads will appreciate the fact that Banks doesn’t spend hundreds of pages describing Ladbroke Grove in the 70s, but it sounds like a fascinating place. (I know a little about the area from reading books about the early days of Rough Trade, which was headquartered in that part of London.) Maybe I need to find a book just about that counterculture scene? Anyone have any recommendations? 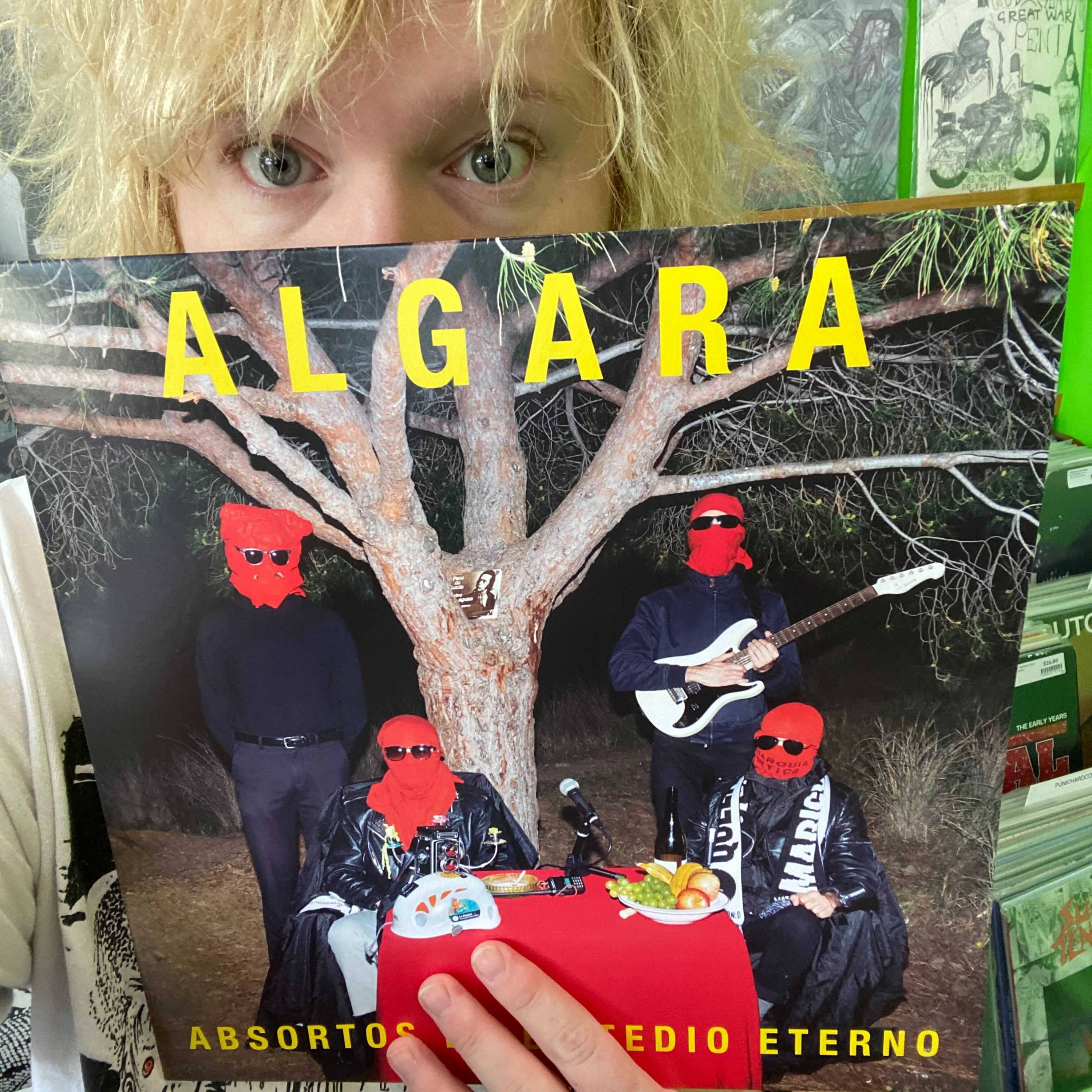 This week for my staff pick I’m writing about the new LP Absortos En El Tedio Eterno by Algara, just released by the fine folks at La Vida Es Un Mus. I remember when Sorry State stocked the first 7” by this band and I don’t think I ever really gave it a fair shot. To me, they looked like an anarchist version of a costumed Fat Wreck band like Masked Intruders or the Aquabats. I guess I have a tendency to avoid punk records that put off a perceived aesthetic of silliness. But yes, looking further into it, I now understand that the intention behind Algara wearing masks is to remain anonymous in delivering their political agenda. And damn, now that I’ve given this LP a listen from start to finish I have to say shame on me for not giving this band more of my attention.

Speaking strictly from a musical standpoint, Algara is kinda all over the map. The first few songs on the LP have an energetic post-punky feel to them, with earworm catchy single note guitar lines. But by the time you hit the halfway mark on this LP, all constraints are lifted and it’s time for drum machine! I’m picky about a punk band’s usage of drum machine, but for Algara, I think it really works. A song like “Hedonistas” really caught me off guard. After a bunch guitar driven, up-tempo numbers, this song really stands out with its slow tempo and cold, sparse Gary Numan-esque instrumentation. The singer is really charismatic and sassy in their vocal approach. I feel like they harbor a lot of venom behind those catchy vocal melodies. Even though Algara are from Barcelona, something about the energy of the singer and the riffy garage-paced feel reminds me a lot of Sorry State alumns Smart Cops. But I gotta say, the more melancholic, synth-based tracks on this record I’m drawn to much more. That may be purely be because I happen to think those songs are the better songs on the record. “Máquina, Cuerpo, Soga” is my personal favorite. I wish I understood Spanish better because I imagine beyond the music, the lyrical content is the core driving force behind this band.

Definitely a cool and interesting record. If you haven’t checked out Algara yet, do yourself a favor and scoop a copy of this LP from your friendly neighborhood Sorry State.

That’s all I’ve got this week. As always, thanks for reading. 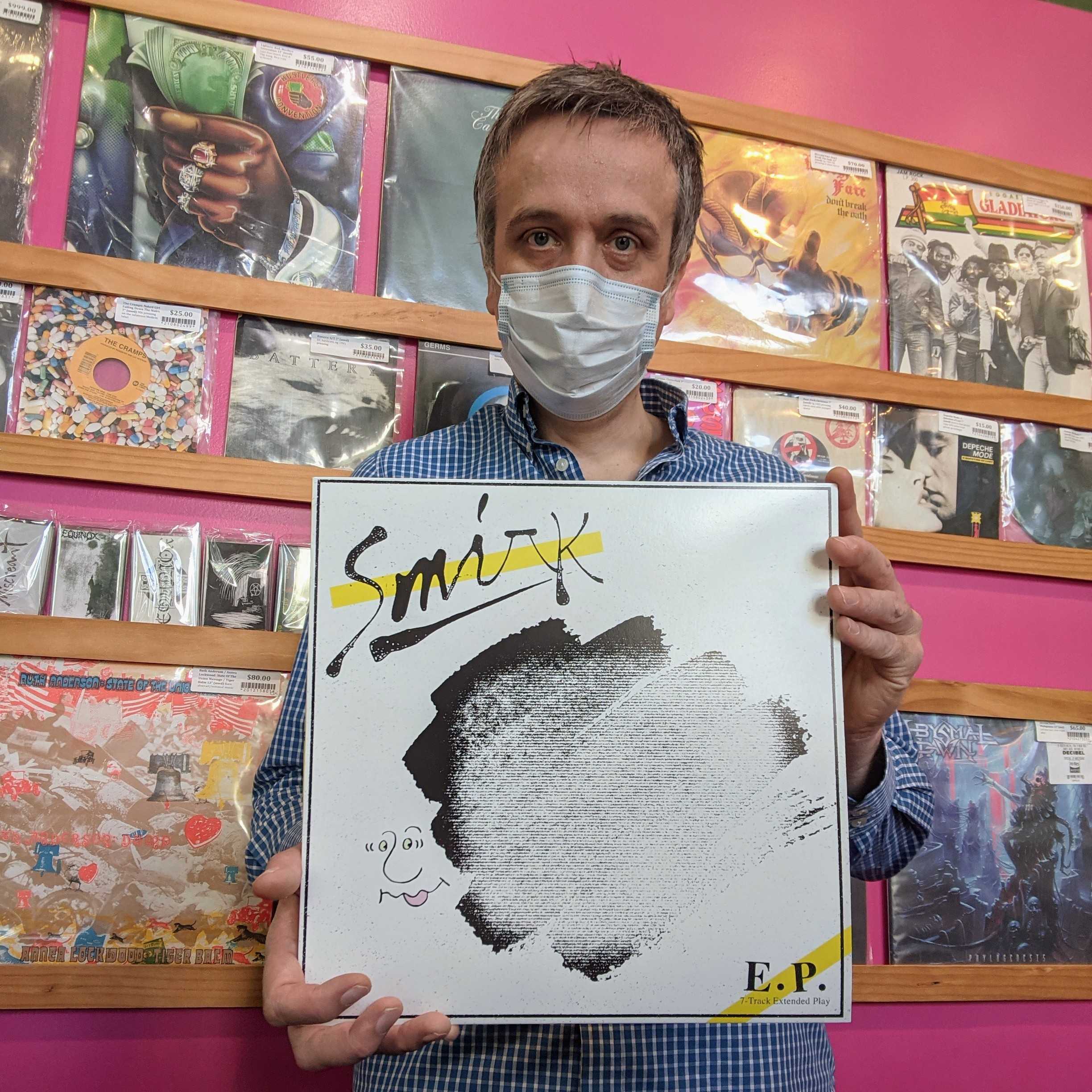 Hey there Sorry Staters, I hope we find you well this week. Another full week of life with plenty going on. More legends in music, entertainment and sports passing away unfortunately. Special mention to Jazz organ legend Lonnie Smith, who put out a bunch of cool records in the 60s and 70s. Pop singer Barry Ryan, he had a huge hit in the 60s with the song Eloise that The Damned covered well and had a hit with. Also remembering Liverpool FC legend Roger Hunt, who also passed this week. He is the club’s second highest goal scorer of all time. May they rest in peace.

The past week has been a good one football wise though. Liverpool had a good result in Portugal against Porto in the Champions League and the world got to see Barcelona and Real Madrid get beaten. The Madrid result was a shocker, although minnow team Sheriff from Moldova has been getting some upset results this season. It will be interesting to see whether they can continue their run.

Music wise, this week I have been listening to and enjoying the new E.P. from Los Angeles band Smirk. Seems like they are getting good reviews from folks who have seen them play, apparently being one of the better groups playing at this year's recent Goner Fest according to reliable sources. We brought in their LP on Feel It Records earlier this year and I confess to not giving it the full attention I should have. This new E.P. is out on Total Punk and should do well for them. I say them because they are a band who play shows but are mostly the brainchild of main man Nick Vicario and this seven-track record does kind of sound like a solo studio project, albeit with a little help here and there. Vicario has another band called Public Eye, and we have carried their records here at Sorry State. The last one was pretty good, as I recall. Post punk sort of sounds mixed with a Pavement like attitude was how we described it. With good lyrics.

This new E.P. being on Total Punk sits comfortably with some of the other bands the label has released. The sound is indeed wiry punk and honestly, I could see our own Rich and ISS playing a double bill with these guys. The analogue approach coupled with good songwriting is always a winner in my book. Smirk aren’t necessarily breaking any new ground with what they are doing but at least they seem to be doing it well and you get the sense that you are still listening to something new even though you are getting comforting retro sounds coming at you at the same time. I’m always partial to a good E.P. You get four or five tracks, and nothing generally outstays its welcome and typically the cuts are exclusive to that release and often a track will stand out more than when buried on a full-length LP. Do you know what I mean?

Early to say which is my favorite track but I’ll leave you with Precious Dreams which I like.

Check it out and if you like them, you can buy the E.P. plus LP from us. Plug, plug.

That’s all I got for you. Peace and love and see you next time – Dom. 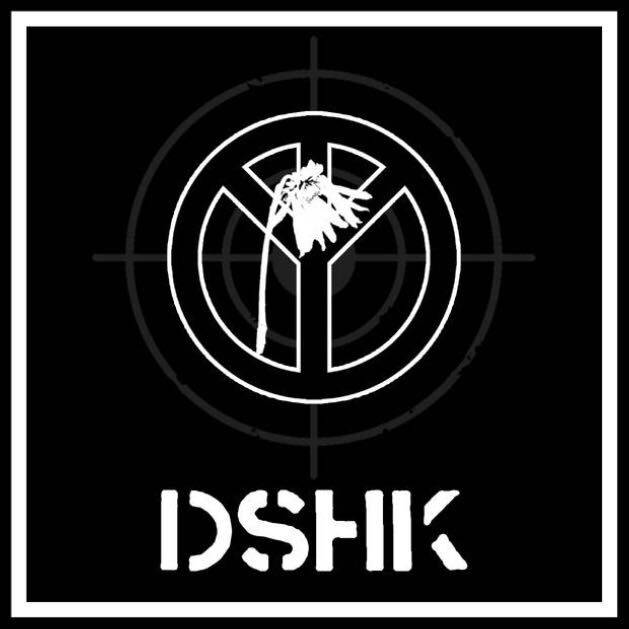 Hello readers, and thank you for reading.

“Power For Them, Pennies For You” was initially released with Demo Fest back in December of last year. It was a digital only release I am pretty sure, as a benefit. I am stoked that DHsK made physical copies of this release! DHsK is from Asheville, so naturally, I am even more excited there is another raging band in North Carolina. This tape is 5 tracks of straightforward, no-nonsense hardcore with a heavy Scandinavian influence. They have some breakdown parts that are reminiscent of other U.S. bands TØRSÖ and G.L.O.S.S. They cover fucking HERÄTYS too, one of the greatest bands that existed in the past decade or so… I lost my mind when I heard that cover track. If you don’t know HERÄTYS check ‘em out. Anyway I think this tape is so killer and you should give it a listen and grab a copy from our webstore! Our copies are out for delivery today. Thanks for reading, back to work for me. ‘Til next time...