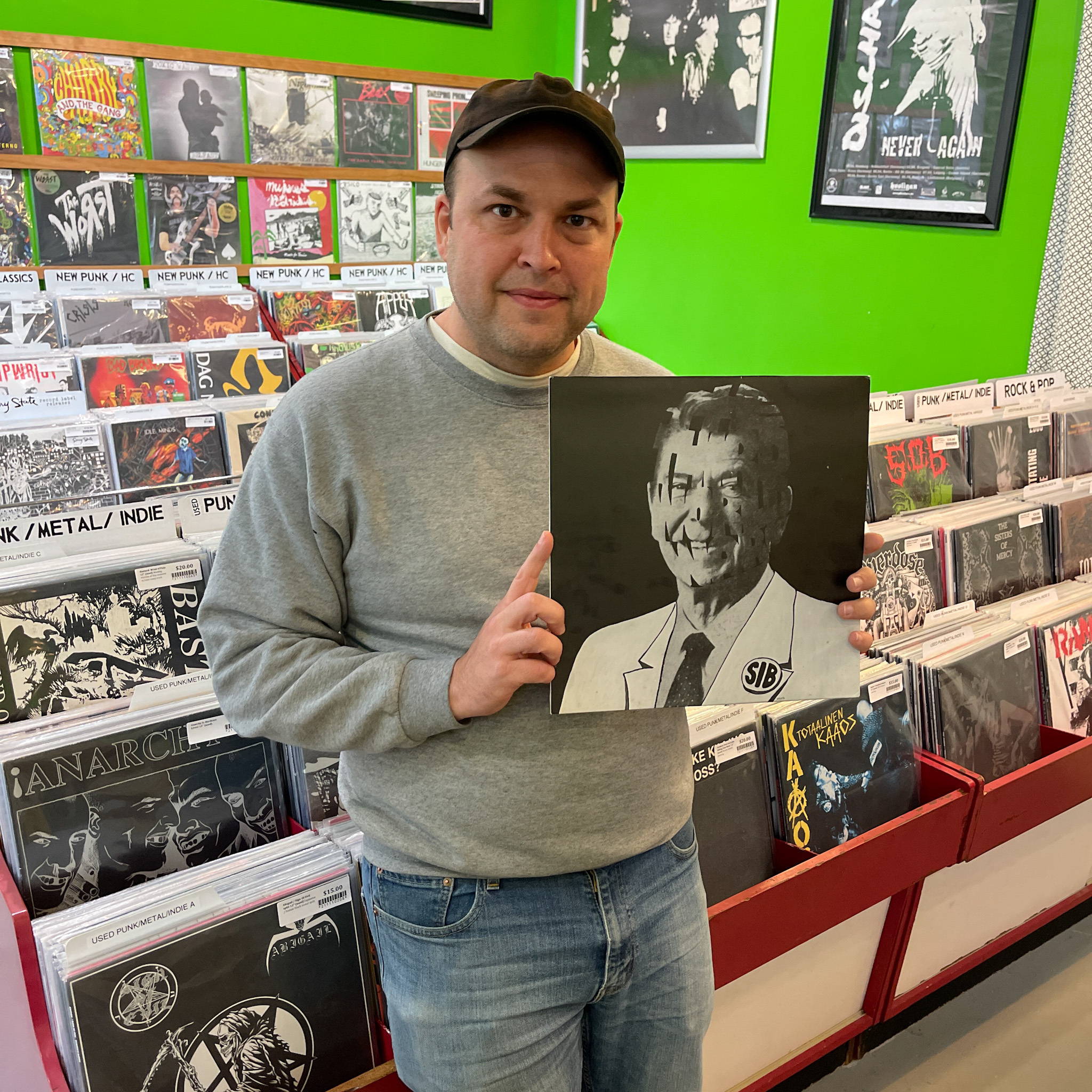 This week I have another pick for which I have little historical or background information. I first heard of Italy’s S.I.B. in kind of a weird way. I was in a band called No Love, and sometime early in our run, someone (I can’t remember who) told me we reminded them of S.I.B. I checked out the band and could hear the similarities, but more to the point I liked what I heard from S.I.B. and added their LP to my want list. It took at least five years to come across a copy for a price I could live with, but that moment eventually arrived.

It’s funny, when this record showed up and I first listened to it at home, my partner said “is this Elizabeth from No Love?” Tracy Crazy really sounds so much like Elizabeth. I know there are a few No Love fans out there, so if you like Elizabeth’s vocals, check this out. The music, though, is pretty different. While half of the record is anthemic punk, about half of Third World War features reggae elements. When I first heard the record, I thought the reggae songs were skippers, but since I got the vinyl, I’ve been enjoying these tracks a lot. I think S.I.B. had a talent for reggae, and their songs in that vein are powerful and memorable.

I only found a few mentions of S.I.B. online, and most of the info people have comes from the bio on their Discogs page, which seems like it was created by one of the band members. S.I.B. was from a small town in Italy, and the band was an alliance between some members who were more into punk and others who were more into new wave, and according to the bio, there was tension between these two factions which led the band to break up. That split is even clear in the two bands S.I.B. names as their chief influences: the Sex Pistols and the Police. While S.I.B. doesn’t sound like the Pistols (who does?), you can hear similarities to groups who took cues from them like the Avengers (who share a powerful, anthemic vocal sound) and the UK Subs (the closest sound-alike to S.I.B.’s punk tracks). Aside from the general reggae vibes, you can hear the Police influence on “The Hero,” whose main riff is a cool arpeggiated guitar line that one could imagine coming from Andy Summers.

While it’s tempting to sort out the punk numbers from the reggae-influenced ones, one of the things I like most about Third World War is that all the songs differ from one another. “Nuclear Spy” is an obvious standout with its big chorus, but it also shares some of the Specials’ quirky exuberance. Album closer “No Moon Out Tonight” is a menacing track that rides its sinister two chords for a full five minutes, while “Boys” has a quirky new wave / ska sound that might remind you of early XTC, Kleenex, or even the B-52’s. Whoever wrote the bio on the band’s Discogs page complains Third World War has a weak sound compared S.I.B.’s punkier live performances, but I think S.I.B.’s powerful playing carries through the remarkable range of styles on the record.

Surprisingly, given the band’s obscurity, Third World War is available on streaming services. So if I’ve piqued your curiosity, dial it up and see what you think! 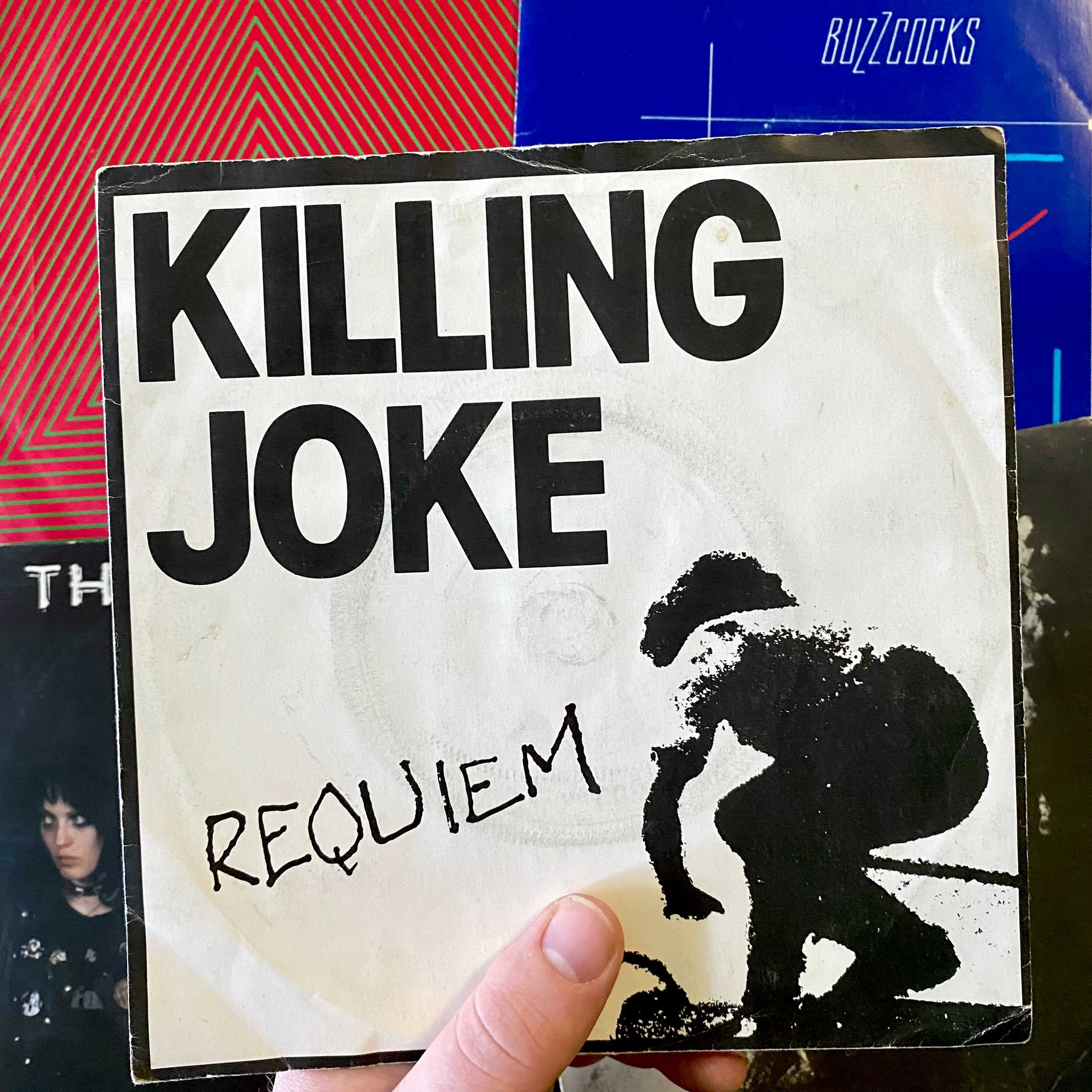 I don’t know why I always feel so busy when time comes around to write one of these. This time next week, I’ll be on a plane flying to LA to play a fest with Public Acid. I’m feeling a little overwhelmed. It’s gonna be sick tho.

I’m not really sure what music to write about. I’m not sure if it’s because the weather is getting colder and I just want music that feels comfortable, but I’ve barely been listening to hardcore at all. For whatever reason, I’m feeling drawn to a lot of new wave, post-punk and early melodic punk singles. I always get into a funk where I don’t wanna feel challenged when listening to music. I only wanna hear hits and bangers. Last night, I was playing a bunch of singles. Between wearing out the Buzzcocks and The Sound to death, I feel like I haven’t been exploring newer records as much as I should. Funny enough, Sorry State just got in a batch of UK singles that totally scratches this exact itch. There’s a bunch of stuff we’ll be putting out in-store for the holidays like Siouxsie, The Adverts, Bauhaus, and a bunch more. The one single that I might have to liberate for myself is the Requiem single by Killing Joke. I’ve got the first LP which opens with “Requiem” already, but of course I need the single too, right? Definitely one of my favorite Killing Joke tracks. The song is really just a repeating pattern, but the riff is so otherworldly and attention-grabbing. Such a huge vocal hook. I wish I had more energy to go into detail about it, but I’m sure all you readers who love Killing Joke already know. I still have many other Killing Joke records to cross off my want list. If someone reading this has a copy of Turn To Red they’re willing to part ways with then hit me up. Are you receiving?

Not really a proper staff pick per se, but y’all should go listen to some new wave. For me? As always, thanks for reading.

‘Til next week (or actually maybe the week after?), 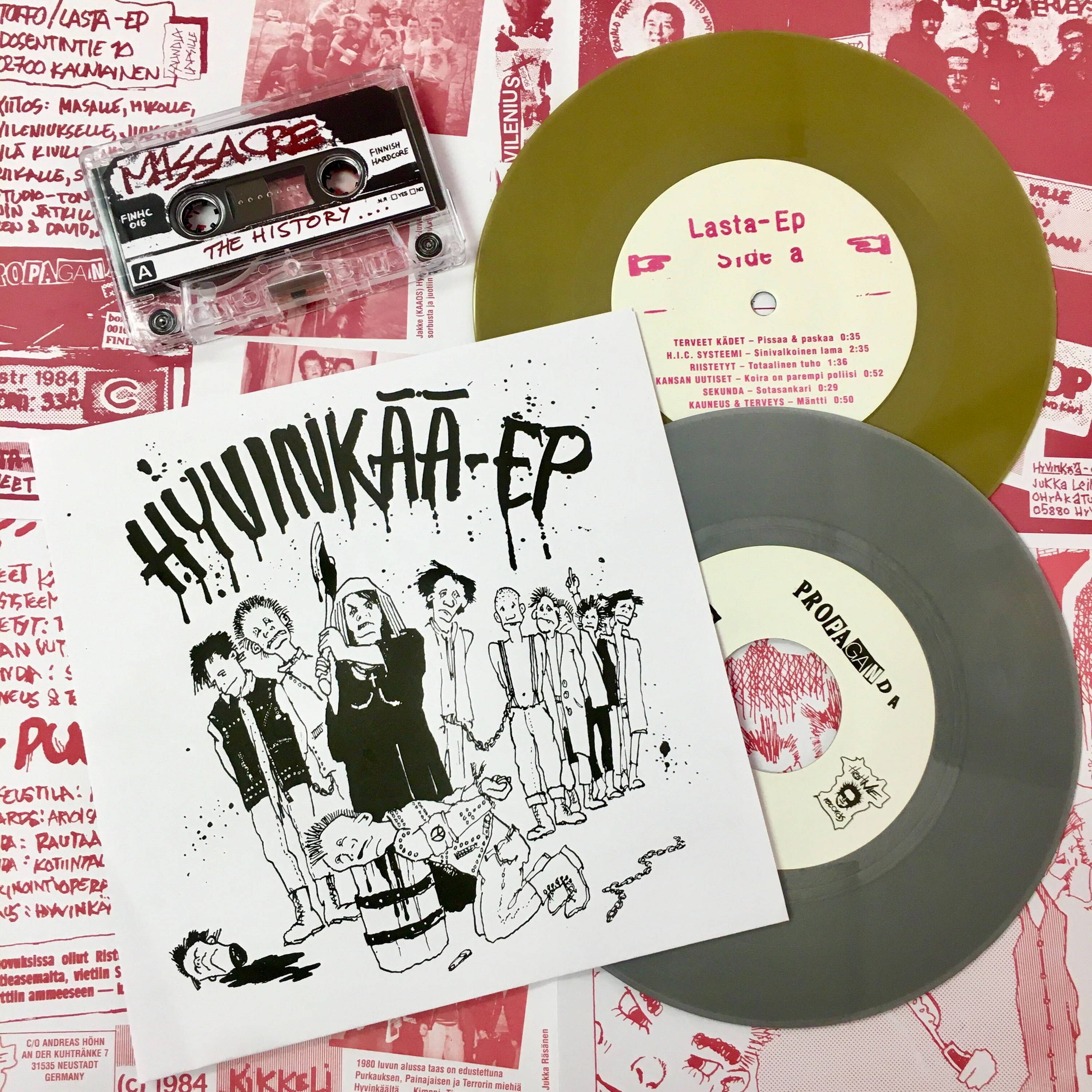 I wanted to mention these two EPs we just got in from Hohnie Records. I had wrote about em a while ago here but it’s not worth re-reading. The HYVINKÄÄ compilation EP is excellent and you should certainly pick it up if you like Finnish HC. The LASTA EP is also really cool. I would pick up a copy as well if you’re able to grab both. It features popular bands like BASTARDS, TERVEET KÄDET, KANSAN UUTISET, alongside some lesser known bands. One of my favorites of those ‘lesser know bands’ is HIC SYSTEEMI. I mentioned their LP in a previous Staff Pick where I talked about Hohnie and the Finnish Hardcore label, just like today actually... The MASSACRE cassette that the Finnish Hardcore label recently released is excellent. It’s not the best sound quality, parts are legit good, but for what it is it’s a great release. This label continuously brings us the opportunity to hear rare and unreleased tracks from killer Finnish bands. Their attention to detail is spot-on, and each release is clearly made by a true fan with a great deal of care. I can’t wait to see what rare Finnish tracks see the light of day yet again. Alright, thanks for reading, peace! 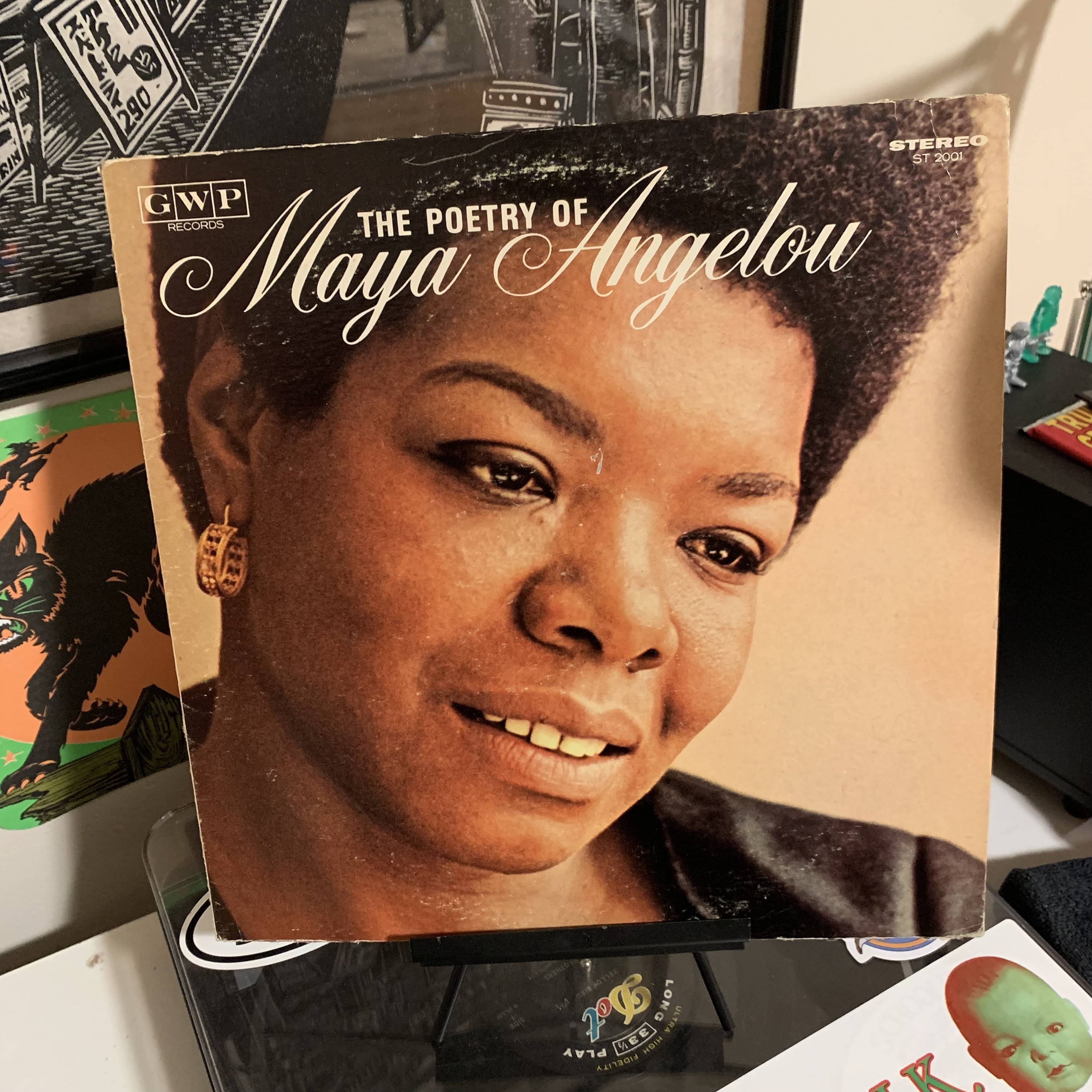 Maya Angelou: The Poetry Of

The other day, Dominic and I were talking about Thanksgiving—about what I was taught in school, versus what I now know. Like most people, I had to unlearn a lot about what I was taught and seek out things from a different perspective. Winners write history, after all, and I feel like it hasn’t been until I was finished with school that there has been a big push to change that perspective. I graduated high school in 2012, college in 2016, so I haven’t been out of school for super long but it seems like a lot is different in just this short time. And in this time, I’ve done a lot more unlearning, not just when it comes to Thanksgiving. Whitewashed history is insidious and really impacts our views of the past (and in turn, present) in ways we don’t understand until we’re confronted with it.

All that being said, almost right after this conversation the next record up in rotation was this Maya Angelou poetry album. I’m not super familiar with her work, but I do remember reading some of her more well-known poems in school. This album is an amazing collection and was really enlightening to me, as someone who isn’t big on poetry. It got me thinking about the few things I learned about her in school and I think I learned more over the course of this record, haha! Her work was glossed over in literature classes and never mentioned in history class as we covered the 20th century. This might be a silly thing to admit on a platform we send out to a ton of people, but I just didn’t realize how politically charged and topical Maya Angelou’s poetry is! There’s a big difference between being told about activism through her poetry and then listening to it.

Partially a testament to her skill, and partially due to the sad truth that not enough has changed, the content of Maya Angelou’s poetry is incredibly relevant today. I’m sure I would’ve been struck by this record no matter when I listened to it, but I think because I was already thinking about how my perspective has changed post-school, this album really stood out. The music accompanying the words is an absolute treat, and this record is very worth a listen, I’m really glad someone put it on YouTube: