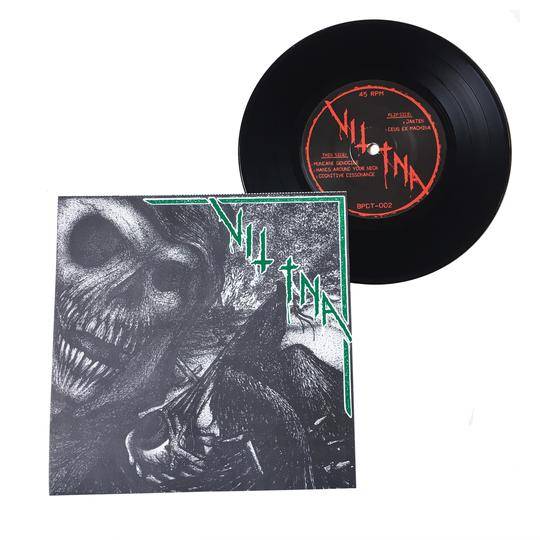 Vittna: S/T 7” (Bunker Punks Discs & Tapes) Debut 7” from this band out of Raleigh, North Carolina. I should acknowledge my bias right off the bat and note that I’m good friends with Vittna, but I’m pretty sure I’d be flipping out about this 7” even if I had no preconceptions or context for it. That’s because Vittna’s take on hardcore is both explosive and smart, balancing deft playing and inventive, technical songwriting with the heft and power that all great hardcore should have. On your first listen this EP will bowl you over with its big sound, meaty riffs, and bellicose vocals, all of which portray an intimate familiarity with d-beat classics like Discharge and Anti-Cimex. However, Vittna sprinkle the record with lighter touches as well. There are moments of subtlety like the Part 1-esque intro, the off-beat accents on “Hands Around Your Neck,” the dissonant, Voivod-esque riffing of “Cognitive Dissonance,” and the sensitive yet militant lyrics, which coalesce around the theme of environmentalism. If you love bands like Varaus, Articles of Faith, Sickoids, Die Kreuzen, and Mecht Mensch (all of whom have a similarly refined take on hardcore), I’m certain that you’ll be as excited about Vittna’s debut as I am. Throw in an attractive screen-printed jacket that serves as an eloquent visual approximation of Vittna’s music and the deal is sealed.
Back to News