Record of the Week: Various: Destroy All Art Volume 2 LP 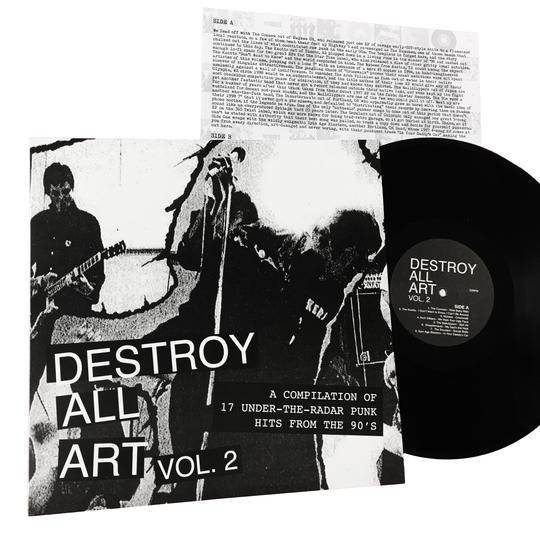 Various: Destroy All Art Volume 2 12” (Rock N Roll Parasite) In case you missed the excellent first volume, here’s the basic idea behind Destroy All Art: it’s a Killed by Death compilation, but the tracks come from records released in the 90s rather than the 70s and 80s. Everything is raw, nasty, lo-fi, and bears no similarity to the overproduced skate punk and pop-punk we associate with the 90s. You know how those later Killed by Death and Bloodstains volumes can get weighed down by mediocre tracks? Destroy All Art has no such problem because the sprawling world of independently released 90s punk 7”s is virgin territory for these types of compilations. As if to illustrate this point, the compilers pack Volume 2 with just as much first-rate punk as the first volume, if not more. My favorites include the Knotts (who are raw and snotty, reminding me of the first Heart Attack single), the Arch Villains (whose injection of organ into the classic KBD punk formula gives them a unique vibe), Rust (a great, loose Cockney Rejects homage), the Babysitters Club’s (a dumbed-down take on the Donnas’ Ramones-influenced punk template), and Spin Age Blasters (who build their quirky track around Penny Rimbaud-esque marching band drumming). Doubtless you’ll have your own favorites as this record presents a bounty. If you’re a big fan of the Queers’ KBD-era material, a big grip of bands  remind me of them, and if off-color lyrics that wouldn’t fly in 2018 get you going you'll find some of that too. The only real trace of the 90s on this thing (aside from the aforementioned political incorrectness) is a slight Estrus Records / hot rod punk vibe on a few tracks (the Nailclippers and the Disasternauts), but even those tracks rip with the ferocity you expect from this type of comp. As with the first volume, this will add a few records to your want list (and other people’s lists, I’m sure, which will drive up prices), but it also provides an outstanding soundtrack to chasing them down.

Sorry, no streaming link for this... you'll just have to trust us that it rules!
Back to News