Record of the Week: Uranium Club: The Cosmo Cleaners LP 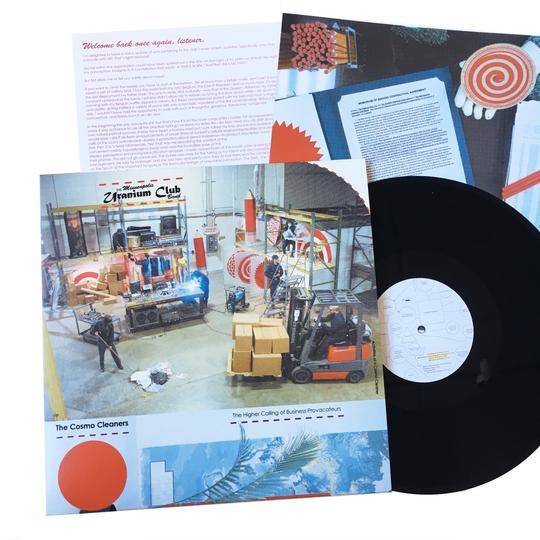 Uranium Club: The Cosmo Cleaners 12” (Fashionable Idiots) Third album from this Minneapolis band, and I think this is the one where they’ve gone from being an excellent band to a great one. It’s not as if The Cosmo Cleaners is a great leap forward; it still sounds like a Uranium Club record. Uranium Club is one of those bands that has an instantly identifiable sound. In fact, they’ve had that sound since they started releasing music, but The Cosmo Cleaners finds them stretching what they can do with it. The songs are longer (“Interview with the Cosmo Cleaners” stretches to over twelve minutes!), allowing the band to delve deeper into the krautrock-esque, gradually evolving repetition motif they’ve explored since they started. Uranium Club has also had interesting lyrics since they started, but this album offers their best yet. Much like I was saying about the Cool Greenhouse record I also wrote about this week, when I listen to The Cosmo Cleaners I find myself paying more attention to the lyrics than the music, which is rare for me. There are songs I consider all-time favorites I couldn’t tell you more than a few words to, but I get lost in Uranium Club’s lyrics, which can range from surreal narratives to Edward Lear-esque phonetic wordplay. This is also one of the best-sounding records I’ve heard in ages, with a crisp sound that rivals anything you’ll hear from releases on big indie labels like Merge or Matador. I’m having trouble articulating what’s so great about The Cosmo Cleaners. When I first listened to it I said to myself, “yep, this is another Uranium Club record,” but with each subsequent listen I find more to love. I love listening to music, so I get excited by everything from in-the-box genre exercises to off-the-wall experiments. However, The Cosmo Cleaners is a truly great record. It’s so good it’s destined to be a huge commercial success or a cult classic. We’ll leave it to history to decide that, but right now I'll go back to listening.