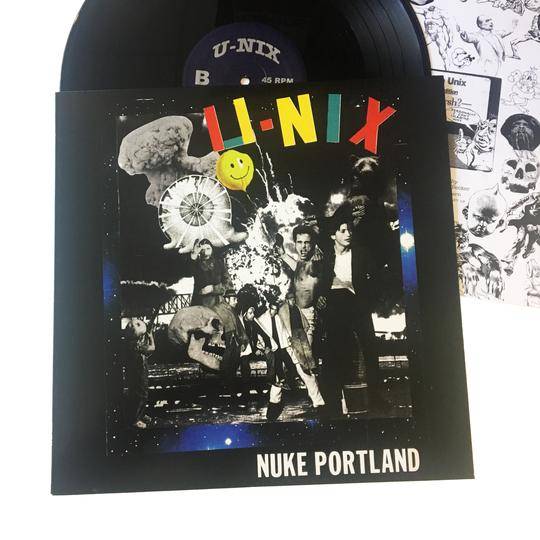 U-Nix: Nuke Portland 12” (Feel It) With great new records from Closet Christ, Q, and Eke Buba all landing this week lovers of lightning-fast hardcore have a lot to keep them occupied, but this debut 12” from U-Nix doesn’t deserve to get lost in the shuffle. Along with Nosferatu, Suck Lords, and Alienation, U-Nix are one of the key bands that comes to mind when I think of this micro-scene that’s happening right now. These bands feature fast tempos a la Deep Wound or the Neos, intricate songwriting that reminds me of Koro, and a sense of menacing looseness rooted in Void’s branch of hardcore’s family tree. Of those bands, U-Nix’s unique trait is their sense of bad-trip psychedelia. “Society’s Victim” has the rhythm of a Bib-style noodle mosher, but it’s overlaid with a swirling metallic riff that stresses that rhythm’s seasick quality. Then there’s the loping, Fang-esque parts in “Liberal Hardcore,” which sounds like a bad comedown. These parts contrast starkly with the fast and intricate hardcore that makes up 3/4 of this record. But rather than detracting from the fast stuff, it makes it even more intense, giving Nuke Portland a whiplash effect that reminds me of Gauze or the first Die Kreuzen LP. Throw in a perfectly fuzzy and heavy recording and it’s hard to imagine how this could have been any better.