Record of the Week: United Mutation: Dark Self Image LP 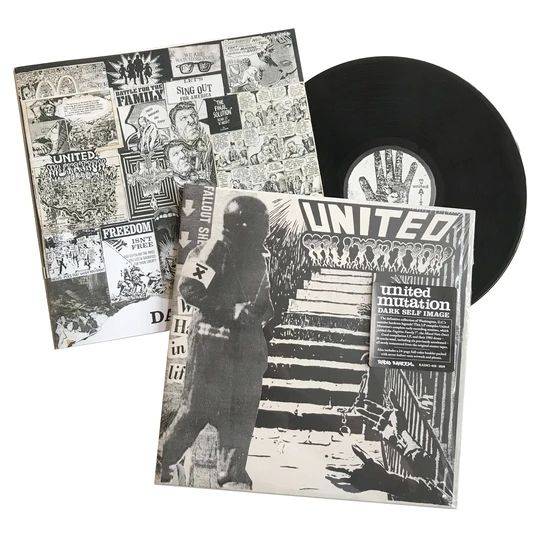 United Mutation: Dark Self Image 12” (Radio Raheem) Radio Raheem once again works their magic on a lost punk classic, and this time DC outsiders United Mutation receive the love. I first heard United Mutation in the late 90s after stumbling on a used copy of their second EP, Rainbow Person, and they blew my mind. I had heard plenty of 80s hardcore at that point, but the sinister and psychedelic elements of their sound were new to me, having assumed the more straightlaced and one-dimensional sound of bands like Minor Threat was the best and only trick in hardcore’s playbook. United Mutation’s music seems less novel in a world where any curious punk can hear G.I.S.M. or Kuro with the click of a button, but it was revelatory to me, especially since UM operated right in my home state of Virginia. United Mutation’s music has gotten more attention in the internet era, but until now they haven’t been easy to hear in physical formats, with the only things available being the original pressings of the two EPs and a spate of compilation releases on the German labels Lost & Found and Bitzcore, all of which were out of print and impossible to find by the late 90s, particularly in the United States. As usual, Radio Raheem’s reissue job is impeccable. Dark Self Image compiles three early studio sessions and offers a wealth of unheard music for even the UM diehard, and the audio restoration and mastering sounds incredible. The packaging is also deluxe (a la RR’s Agnostic Front and Abused reissues), with a huge, LP-sized booklet. For me, the booklet would be worth the price alone, as it reveals UM’s graphical output was just as fascinating as their music. If you’re a fan of what some people call “outsider hardcore,” this is something you should own. It’s a true buried treasure, equally rewarding whether you’re familiar with the band or just coming to them for the first time.

This release isn't available for streaming, but here's a YouTube rip of the Fugitive Family EP, which appears on Dark Self Image in its entirety: