Record of the Week: The World: Reddish 12" 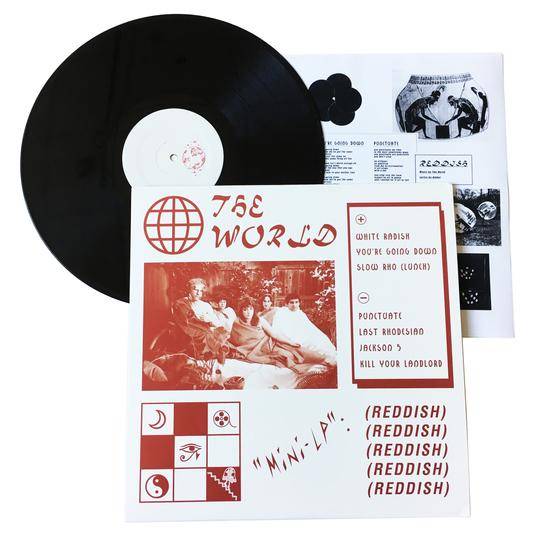 The World: Reddish 12” (Lumpy) Somehow I missed the World’s first LP, First World Record. We carried it in the store but it sold out in a flash and we weren’t able to restock it, and I never got around to getting a personal copy to listen to. Shame on me, because Reddish makes me want to do a deep dive to find out all I can about this band. You could describe the World’s sound as groove-oriented post-punk a la Delta 5 / Gang of Four / etc., but they’re so much more than that. Rather than just imitating those bands’ sounds, they share those groups’ affinity for rhythm. Each of the seven tracks on Reddish has a unique, toe-tapping groove, with the band jamming around that groove with a seasoned group’s agility. The guitar, vocals, bass, drums, or saxophone each might take center stage for a moment, then slide out of the spotlight so that someone else can do something interesting. Speaking of the saxophone, rather than the skronky or squeaky sax that most punk-influenced bands have, the World’s saxophone player can play in tune, often harmonizing with the other instruments. This gives the World the harmonic complexity I like from two-guitar bands, but with a unique timbre that sounds like no one but them. The songs cover a lot of stylistic breadth, from the dub-y “Kill Your Landlord” to the pogo-punk “Last Rhodesian,” to the playful, Madness-esque “Jackson 5,” but I love every minute. Wrap it all in a warm but clear recording and you have a real keeper.