Record of the Week: The Cool Greenhouse: London 7" 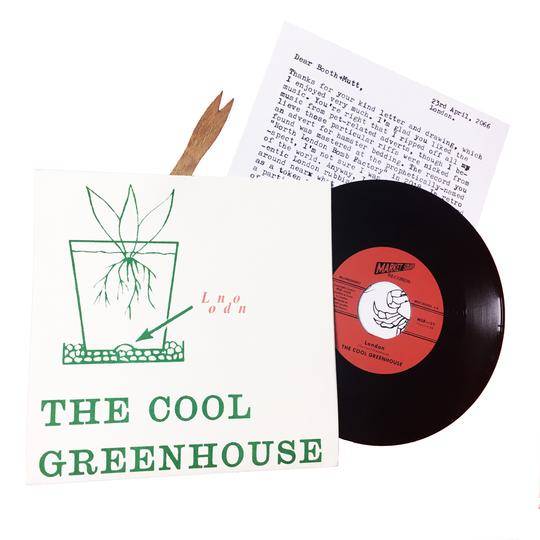 The Cool Greenhouse: London 7” (Market Square) I’ve come to look forward to every new release on the Market Square label, which is run by Paul Messis of Suburban Homes. While Messis has a background in retro 60s garage (and Market Square started out releasing records in that vein), lately he’s been taking the label in the UKDIY-influenced direction of his Suburban Homes project. The latest release is this debut from The Cool Greenhouse, whose vintage Casio keyboard tones, blatant Fall-isms, and defiantly British approach are tailor-made to tickle this anglophile’s fancy. The a-side, “London,” sounds like the music was made entirely on a vintage Casio (including the just-on-the-verge-of-goofy rhythm track), reminding me of the way the mechanical and human rhythms fight for dominance within the track’s arrangement in the Fall’s “Lie Dream of Casino Soul." Over top, the vocalist speak-sings a sarcasm-drenched account of his move to London, and as is often the case (see, for instance, “Strange Town” by the Jam) he has rather mixed feelings about it. The flip takes a similar tack, with its darker melody reminding me alternately of “TVOD” by the Normal or (not to repeat myself) circa ’81 Fall. While a lot of current bands have similar influences, no one puts them together in quite the same way as The Cool Greenhouse. Further, rather than sounding like mere pastiche or tribute, The Cool Greenhouse use the framework of UKDIY to articulate their (his?) thoughts on life in the here and now. All of this adds up to a single I can’t stop flipping over, so if this sounds like your type of thing I’d smash that buy button because this one-and-done pressing is already well into the process of disappearing from the shelves.