Record of the Week: The Cool Greenhouse: Crap Cardboard Pet 10" 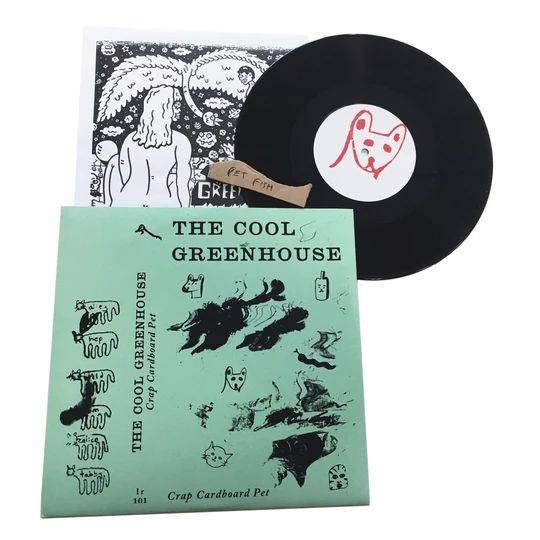 The Cool Greenhouse: Crap Cardboard Pet 10” (Lumpy) After two singles, here’s a 3-song 10” from the UK’s the Cool Greenhouse. I was a big fan of the band’s two previous singles, but Crap Cardboard Pet is now the Cool Greenhouse record to get… these tracks are fantastic! The songs on Crap Cardboard Pet are long—the shortest track is almost 6 minutes long and “Crap Art” is over 9—and the extra space allows the Cool Greenhouse to go deeper and further than they’ve gone before. The Fall-isms are still blatant—in particular the way the singer frequently… pauses in the middle… of lines… and adds… extra… syllables… to his words-ah—but it feels more like carrying the Fall’s baton rather than ripping them off. The Fall’s ability to ride a Can-inspired groove into the sunset is one of the most underrated aspects of their brilliance, and the Cool Greenhouse has nailed that better than any modern band I’ve heard. In particular, “Crap Art” moves like a set of tectonic plates, shifting underneath you almost imperceptibly, making nine minutes go by in what seems like two. The grander scale also allows them to go further with the lyrics. “Pets” and “Crap Art” start off as observations on the absurdity of contemporary life, but each track gets weirder over its run-time, drifting into near-absurdity. The lyrics are hilarious… I guffawed at least ten times while listening to this record. Cheeky lyrics and very long songs are two strikes for punk purists, but I don’t care… I love this record.