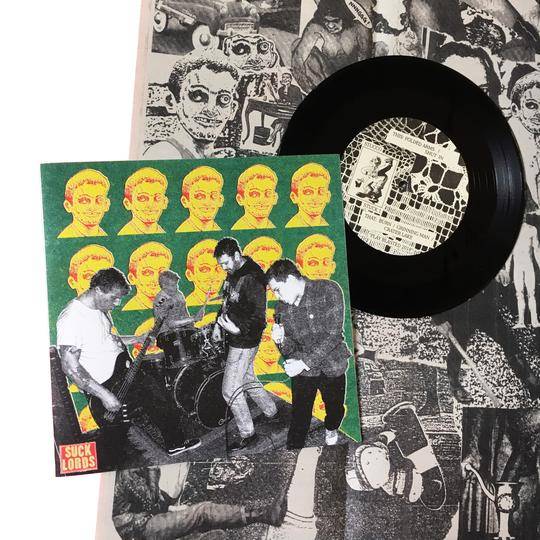 This week's Record of the Week is the debut EP from Portland's Suck Lords! Here's what Jeff had to say about it:

Suck Lords: New Lords Music 7" (Stucco) Debut vinyl release from Portland-based hardcore band Suck Lords. This band made a strong impression on me after hearing their 2016 demo tape, which had no song titles listed anywhere on the j-card. Rather, the experience of listening to that tape was a blur of explosive energy and raw, chaotic song-structures. Now making the leap to vinyl on their debut EP “New Lords Music,” Suck Lords really benefit from a clearer and more powerful recording. The 5 songs come across more focused than chaotic, but still jarring in their rapid twists and turns. The BPM count gets up to blazing paces at certain moments, but even with the breakneck changes and frantic tempos, Suck Lords do not resemble anything on the powerviolence end of the spectrum. I would say 80s hardcore bands like Deep Wound are more their vibe. While the songs are pummeling, I think the quality that enhances the face-melting musicality of the band is their attitude and overall outlook. To give you an idea on their position, Suck Lords made a short run of promotional zines shortly before this 7” was released that depicted the face of their “mascot” pasted over the famous “Calvin pissing” meme from Calvin & Hobbes. Each page of the zine is a different object of irreverence being pissed on, whether it be Sheer Mag, Maximum Rocknroll, or chorus pedals. The total disregard for hurt feelings and general extended-middle-finger approach is honestly pretty refreshing. And sure, while a few jabs may be well-deserved, Suck Lords’ intention is obviously pretty silly and childish. That said, I think the youthful, pissed off energy is reminiscent of what was so exciting about a lot of 80s US hardcore that is lacking in a lot of current bands. If your worldview is also denoted by constantly shouting “Fuck that!”, then Suck Lords will most likely feed your flame.
Back to News