Record of the Week: Subversive Rite: Songs for the End Times LP 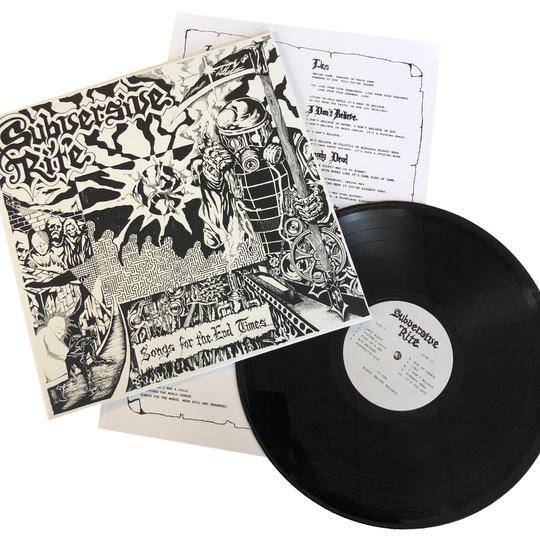 Subversive Rite: Songs for the End Times 12” (Bloody Master) New York’s Subversive Rite have put out two tapes, previously compiled on a limited 12” on Bloody Master, but Songs for the End Times is their first proper, made-for-vinyl release. As the label states in their description, “the demos were good, this LP is much better.” The style is the same, but better, more powerful production and more finely honed songwriting and arrangements make this record hit a lot harder. If you haven’t heard them, I don’t think it’s a stretch to say Subversive Rite takes a lot of influence from Sacrilege. If Behind the Realms of Madness is the perfect 50/50 mix of Discharge/Broken Bones-inspired hardcore and thrash metal, Subversive Rite tilts more toward the hardcore side with less metallic riffing and a more straightforward, Poison Idea-influenced drumming style. When the band lays into big, dramatic punches they hit with the force of a battering ram. It’s rare to hear a band that has such a fast and metallic style generate such brute force. While it’s pretty much all-go, no slow, there’s enough variation to make this short LP a gripping, teeth-clenched listening experience for its entire duration. If you like your hardcore to sound huge and powerful, I can’t recommend Songs for the End Times highly enough.