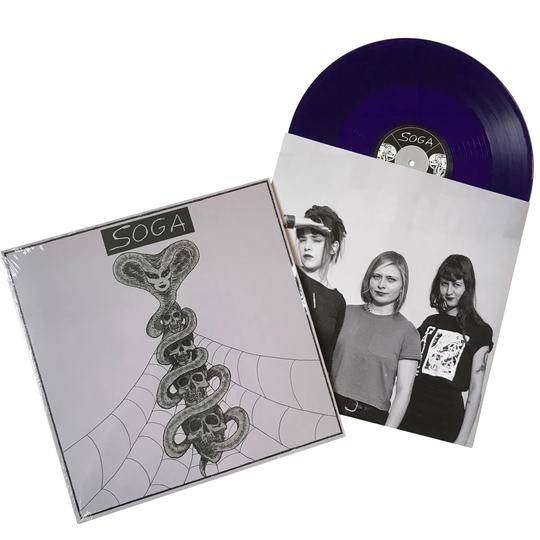 Soga: Demo 12” (Iron Lung) Demo on vinyl from this Mexican band featuring members of Riña, Cremalleras and Ratas Del Vaticano. Iron Lung isn’t in the habit of slapping every half-decent demo to vinyl, so one could assume this demo recording is something extraordinary. That assumption is not wrong. To put it bluntly: I fucking love this record. I love raw, desperate-sounding hardcore with emphasis on passion over technique, but I also love more composed hardcore punk with one foot in 1977. Those two sounds don’t blend intuitively, but Soga made it happen. It’s like if you took Olho Seco or Ataque Frontal, asked them to record songs for the Beach Blvd compilation and told them both to blend and to be themselves. There are moments of loose and careening hardcore you’ll love if you’re into recent records by Forra, Hologram, or Nosferatu (all personal favorites), but songs like “Anuncios De Neón” and “Medianoche” bring to mind the fist-pumping, UK-influenced punk of bands like Channel 3 or Kraut, albeit played with the rough and loose approach of the first three bands I mentioned. I keep spinning this record over and over thinking, “how did they make this work?” Then I remember to stop analyzing and just let this incredible music course through my body like a drug. Perhaps Soga is tailor made to my particular taste, but if your taste is anything like mine, you’ll want to check this out immediately.

Caetano Veloso: S/T. Phillips 1968
With the fires raging in the Amazon, thoughts have gone to the people and music of Brazil for my first pick this week. What better record to recommend than the debut from the great Caetano Veloso. Although technically not his first recording, he doubled up with Gal Costa the previous year, this was the record that gave Tropicalia its name and spearheaded a movement. This record has everything. Elements of the Indo-Brazilian heritage, the recent Bossa Nova rhythms, pop, rock and newer psychedelic sounds are all combined into what was termed the artistic cannibalism that typified the Tropicalia sound. It’s a wonderful listen, with the influences just mentioned combined with spoken word and interesting electronic effects, you don’t have to speak Portuguese to understand that this is something new and exciting that still translates today, fifty-one years later. Original vinyl copies have always been prized highly, particularly since the interest in Tropicalia peaked in the late 90’s and early 2000’s, with copies regularly fetching three figures. Bootlegs have stepped onto the market place to fill the void but thankfully now our good friends at Third Man Records have done us all a favor and released a beautifully mastered and pressed Mono version of this classic and it can now be in your collection for a much more accessible price. Interestingly, Third Man date the recording as from 1967, which may have been when tracks were recorded but the release date was definitely 1968. A typo perhaps on the hype label.
Johnny Clarke: Enter In To His Gates With Praise. Attack 1975
Moving from Brazil to Jamaica for my second pick. This was the breakthrough record for singer Johnny Clarke and is now regarded as a Roots Reggae classic, for good reason. Produced by Bunny Lee, engineered by King Tubby and backed by The Aggrovators group, it had the perfect pedigree for success. Although initially Clarke was not the preferred vocalist. Earl Zero was on lead vocals with Johnny singing back up. Producer Bunny
Lee was not satisfied with the results and switched Johnny to lead and this proved to be a definitive moment in the future of Clarke’s career, catapulting him to fame and popularity instantly with the release of the record. The sound is a mix of melodic roots and lovers reggae and is easily identified by the flying cymbal sound that drummer Carlton Davis perfected and became synonymous with The Aggrovators’ sound and gave them and Bunny Lee hit after hit and Bunny his nickname, “Striker”. He shoots, he scores. Now available again, courtesy of Italian label Radiation with original cover art, this is a record that every fan of 70’s Reggae music should have in their collection.

Sup? I've been out of the shop basically all month playing shows with Public Acid and Vittna and haven't had a lot of time to sit down and listen to new stuff coming through, but I did see a lot of kick ass bands. Here is a list of bands that I saw (and their most recent release) that pleasantly surprised me:

Skizophrenia: Dead Melodies - These dudes still got it. For some reason this band cruised under my radar for years and I never checked them out, which makes me super bummed now. They freaking kicked ass. Straight up classic 80s style hardcore.

Hot Beef: Demo - This demo came out in 2014,  but holy shit. This band played a one off show at Freak City Comes Alive last week and it was arguably one of the sickest displaces of genuine hardcore punk I had seen in a while. I had heard of Hot Beef because I tried to keep up with whatever Mark Winter (Coneheads, CCTV, etc.) was up to, but this project slipped through the cracks for me. I'm glad I got to see (maybe?) the only time this band will ever play, and it's also fun discovering music from years earlier that went under my radar. Also two homies from Mutant Strain played in the band for this gig which was badass to see.