Record of the Week - Rudimentary Peni: The Great War 12" 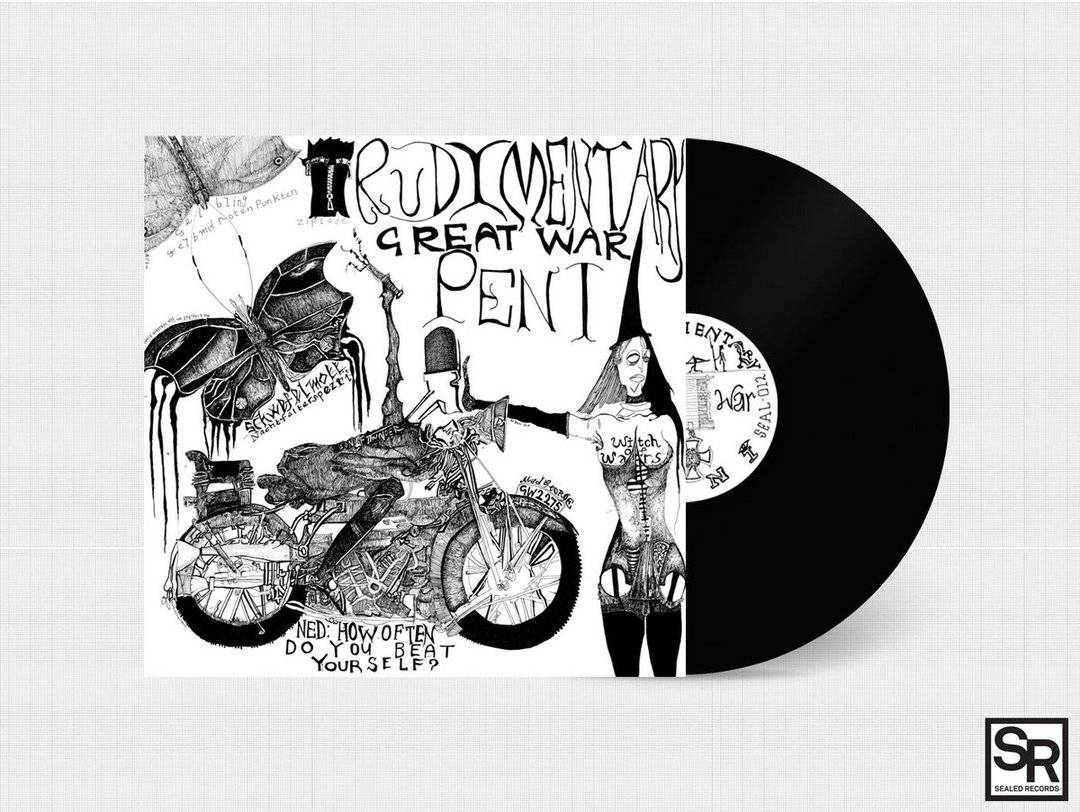 Rudimentary Peni: The Great War 12” (Sealed Records) The new Rudimentary Peni album is upon us! It seems like no one knows quite what to think of that, and I’ve had a few people ask me if I think it’s any good. Here’s the TL;DR version: if you come to The Great War only knowing Rudimentary Peni’s first two EPs and/or Death Church, you are likely to be disappointed, but if you celebrate Peni’s entire catalog, you’re going to love it. Now for the “director’s cut” of my opinion. I first heard Rudimentary Peni in the mid-90s in the goofiest, most poseur-y circumstances you could imagine. I noticed all the cool punk kids had these screen printed patches on their backpacks, jackets, and jeans and I wanted some. I found an issue of Maximumrocknroll and saw an ad for a patch distro, so I ordered their catalog, which was a few sheets of copy paper adorned with dozens of logos, primarily from the classic crust and/or anarcho bands you’d expect. I ordered some patches so I could look like the cool kids, but I figured I should also try to hear these bands if I was going to be sporting their gear. So, I placed an ad in Maximumrocknroll’s classified section asking for pen pals who wanted to trade mix tapes. I think one taker eventually asked what I wanted to hear, and I wrote every band name from the patch catalog. I received two mix tapes (I still have them… they’re very important to me) with songs by bands like Subhumans, Crass, Flux of Pink Indians, and a few bands like Terveet Kadet whose names and song titles I couldn’t even read. (Side note: I have no recollection of what, if anything, I sent in return, but my best guess was that it was a tape full of the youth crew revival bands who played eastern Virginia, where I grew up. This dude, whose name I can’t even remember, gives me this master class on underground 80s punk and I’m dubbing him the fucking Time Flies demo… if my punk Yoda is out there somewhere, I apologize.) Among the tracks were several by Rudimentary Peni, and they immediately stood out. To this day, the intro to “Teenage Time Killer” is one of my favorite moments in the entire history of recorded music. I loved the Peni tracks on the mix, but it would be years before I heard the first Rudimentary Peni EP in its entirety. This was long before Discogs, and when you found a band you liked, you found out more by scouring the bins and picking up anything you saw. I’m pretty sure the first Peni record I owned was The Underclass, which I bought around the time it came out in 2000. I wouldn’t have had any idea where it fit in Rudimentary Peni’s discography, but I thought it was fucking awesome and I still do. Eventually, thanks to sites like eBay and Kill from the Heart I could get the lay of the Peni landscape and I dove down the rabbit hole. Of course I got copies of the EPs and Death Church and was transformed, but I also got Cacophony and Pope Adrian 37th Psychristiatric, which are tougher listens. Perhaps someone who listened to Rudimentary Peni’s chronologically (either because they were buying them when they came out or because they were doing so in the digital era, when exploring a discography logically like that is much easier) would have heard one of those two records, jumped off the bandwagon, and never returned. However, since I went into the catalog in this ass backwards way, I acquired the taste for the later Rudimentary Peni material early. And one thing you appreciate when you are familiar with Rudimentary Peni’s entire discography is that their early releases aren’t just great hardcore punk records; they’re great records informed (but not defined) by hardcore punk. Peni’s vision is singular, unique, and immersive. Yeah, maybe I love those early records a little more because they’re louder, faster, and noisier than the others, but there are plenty of loud, fast, and noisy records in my collection. But there is only Rudimentary Peni, and Rudimentary Peni has always been Rudimentary Peni. The Great War is a Rudimentary Peni through and through. As such, I can’t give you a thorough analysis after listening to it for only a few weeks. Like all of their records (as well as Nick Blinko’s drawings), The Great War is so dense with ideas and imagery that I’m going to be chewing on it for a long time. If you have enjoyed chewing on Rudimentary Peni’s later catalog, I am certain you will feel the same. A couple of other quick notes: the packaging, as you would expect, is astounding. I will stare at Blinko’s motorcycle and blimp illustrations for a long time to come. Second, I’ve been reading press about the album, and a few people have noted the recording is rather shrill and piercing, a bit like the tinny, trebly assault of some black metal. The vinyl version sounds noticeably different, warmer and more balanced than the digital version, and I strongly prefer the vinyl version.