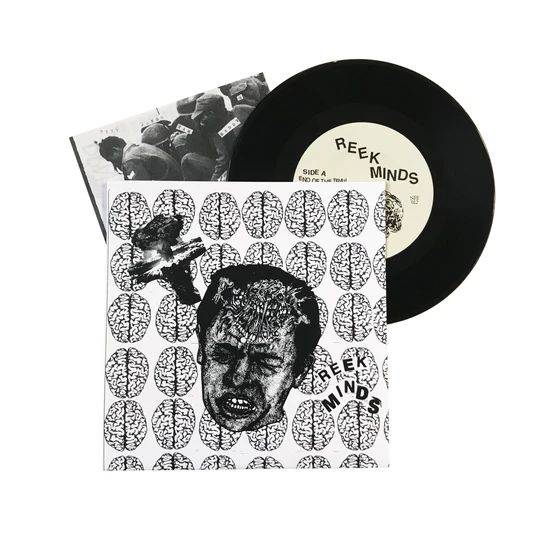 Reek Minds: S/T 7” (Edger) Debut 7” from this hardcore band out of Portland, Oregon on Edger Records, the same label that brought us Suck Lords and Putzfrau. Reek Minds plays a similar style of high-velocity hardcore, and if you were a fan of those bands I recommend checking this out. Reek Minds is one of those rare bands that sounds both mind-bogglingly technical and totally brutal. They have a tempo change about every 1.5 seconds, like you’re flipping as fast as you can between channels playing vintage footage of Septic Death, Pick Your King-era Poison Idea, the Abused, and Siege. You wouldn’t think something this frantic could be so catchy, but I find myself trying to cram in fist pumps and solo mosh moves before Reek Minds moves to the next part. A lot of that catchiness is down to their great vocalist, who sounds about as much like Jerry A circa Pick Your King as a human being can. With eight action-packed tracks, this one provides value for money without wasting a microsecond of your time. After playing this record, it’s all I can do to lift my jaw off the floor, flip it over, and play it again. Seriously, get this NOW.