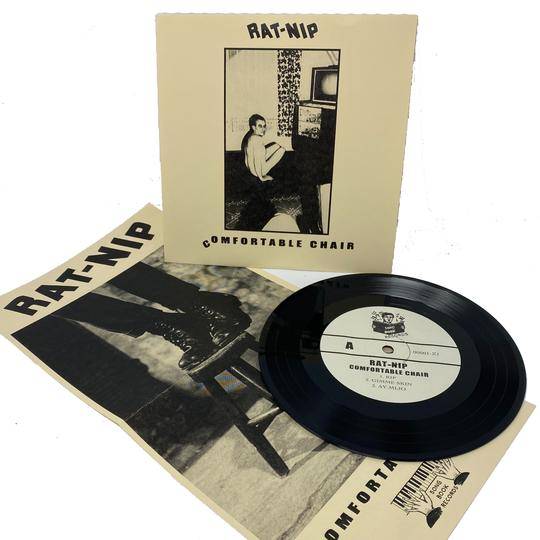 Rat-Nip: Comfortable Chair 7” (Song Book Records) Last year we carried a demo tape from Pittsburgh’s Rat-Nip that came and went so quickly I didn’t have time to write a description. Now they’re back with their debut vinyl and it’s an un-missable crusher. Pittsburgh has had no shortage of great hardcore bands in recent years, each of which has their unique take on the sound. Of the bands from Pittsburgh you might already know, Rat-Nip reminds me the most of Invalid, but Rat-Nip’s Poison Idea influences are even closer to the surface. While it’s ripping fast, power never gets sacrificed in service of velocity, and there’s a heaviness here that reminds me of Poison Idea circa War All the Time. Like that era of P.I., Rat-Nip’s members are all skilled players, but rather than showing off, they focus their craftsmanship on making the music as heavy, angry, and crushing as possible. Even a flourish like the guitar solo on “Ay Mijo” serves the song, providing a wild climax for the end of side A. The lyrics are also strong… nothing flashy, but addressing traditional punk topics like cops, religion, and “the scene” in a way that feels honest and real. If you like the fast and heavy, fist-pumping stuff, don’t miss this one. Also, it’s a limited edition of 300 numbered copies, so don’t sleep!