Record of the Week: Raise Your Voice Joyce compilation LP 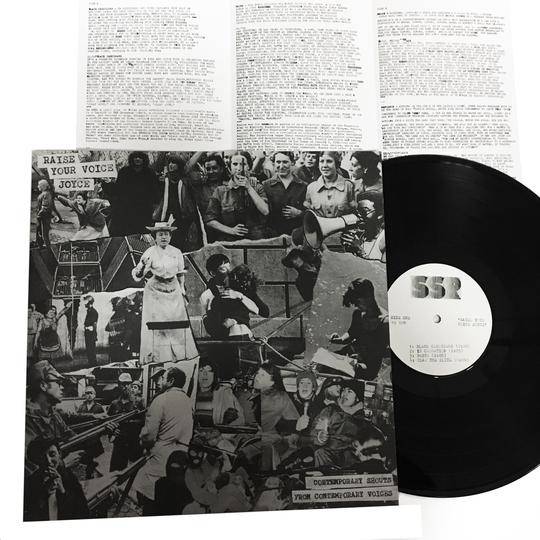 Various: Raise Your Voice Joyce: Contemporary Shouts from Contemporary Voices 12” (Static Shock) I’ve gone on record that David’s Town, the “fake compilation” that Fucked Up released on Record Store Day 2011, is one of that band’s best records, so I was excited to hear Raise Your Voice Joyce, which seems to be a similar project. While the packaging doesn’t mention Fucked Up or anyone in it, the name Joyce refers to a character in Fucked Up’s fictional universe and the record’s insert fills out the character’s back story for anyone who might be following (if it’s even possible to follow). I’m too steeped in my little world of DIY punk and hardcore to understand how this relates to Fucked Up’s oeuvre, but each track features a singer who comes from my little world, namely from bands like BB & the Blips, Nekra, Game, and Terrible Feelings. The list of contributing vocalists and the strength of David’s Town piqued my interest, but Raise Your Voice Joyce far exceeds my expectations, and I’m sure I will be listening to this record a lot in the months to come. David’s Town felt like a sampler platter with each song in a different genre, but RYVJ feels more cohesive. There are elements of anarcho punk (the lead-off track featuring Bryony from BB & the Blips is virtually a Crass homage), goth, and the more experimental corners of post-punk (think Alternative TV), but those are only some of the elements at play. Everything is synthesized into a sound that is rich and singular. The highlights are too numerous to mention them all, but I’ll single out Bryony’s track as well as Ola from Game’s brooding “Defiance” and Kaila Stone’s darkly manic “Olive Calling” as some of my favorite moments. While Fucked Up’s name will attract some people’s attention it’ll make others skeptical. However, if you like the music that Sorry State carries (or that Static Shock puts out) I recommend checking this out. It’s brilliant.