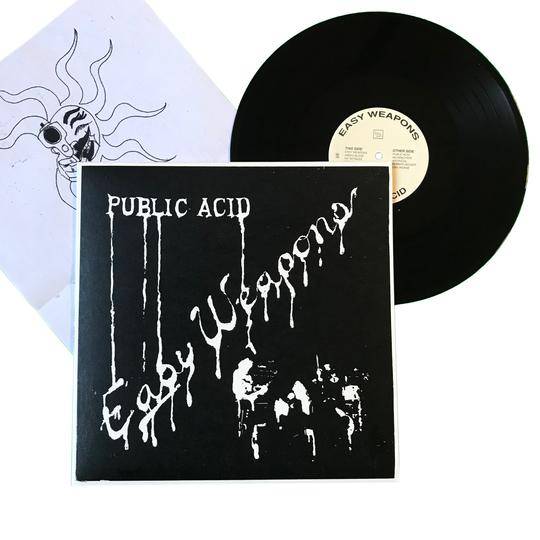 Public Acid: Easy Weapons 12” (self-released) Debut 12” from this North Carolina band, combining blistering 80s hardcore with the chaotic sounds of wild Japanese punk and a tinge of primitive black metal. While Easy Weapons is Public Acid’s debut release, the lineup’s core has been together for well over 5 years, with several releases under the name Holder’s Scar (including one titled Public Acid). I’m glad they changed the name, first because Public Acid is a great name and second because with Easy Weapons they’ve found their own sound and figured out how to execute it. Like the later Holder’s Scar stuff, Public Acid has a lot of in-the-pocket mid-paced parts that make me think of Glue, but on Easy Weapons they balance them with fast parts that sound wild and out of control. The guitar sound and the intricacy of the riffing make me think of G.I.S.M., but Public Acid is heavier and more brutal, even recalling primitive first-wave black metal records like the debut EPs from Sodom or Sarcofago. They anchor the sound with straightforward, muscular drumming a la Poison Idea’s Record Collectors EP. Like that record, Easy Weapons seems to pull in two different directions, the rhythm section’s mechanistic power contrasting with the wild nihilism of the guitars and vocals. I always like when great hardcore bands get weird, and my favorite moments on this record are the ones that feel the most “out there,” like the noisy, Randy Uchida-esque guitar solo on “Incapacitate” (my favorite track) or the subtle tape loops during the closing “1000 Insane.” The beautiful, hand-screened jackets (designed and printed by Thomas Sara) make this feel like a cult Japanese hardcore record from the 80s, which perfectly matches the music’s vibe. Far more than just a standout record from a strong local scene, Easy Weapons matches the power of recent releases by top-shelf hardcore bands like Impalers, Glue, and Concealed Blade, so if you follow those bands you should snatch this up before its 300-copy self-released pressing disappears.