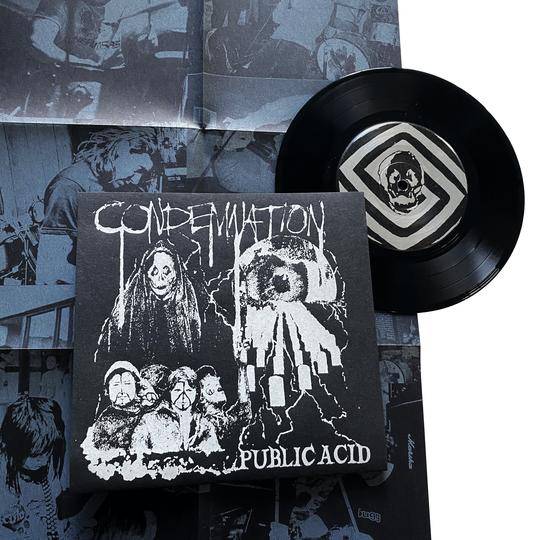 Public Acid: Condemnation 7” (Beach Impediment) I should start this description by noting that Public Acid’s drummer works at Sorry State and the band members are friends, so you can dismiss my words as me blowing smoke up my friends’ asses. However, ignore me at your peril because Condemnation might be the best hardcore record of a year chock full of great hardcore records. (If you hear anyone say no good hardcore punk came out in 2020, that person is, objectively, a fool.) There’s so much to love about Public Acid that I can’t hope to enumerate all of it here, but one thing that draws me to them is their mix of artiness and neanderthal brutality. That’s a mix that almost always appeals to me, but Public Acid doesn’t achieve it by juxtaposing elements; instead, it something that’s baked into their approach and aesthetic at a deep level. The drums, the riffs, the vocals… everything about the music is so mean, so heavy, and so powerful, but there’s always something askew that keeps any of these elements from feeling dumbed down or obvious. That’s been true about the band from the beginning, but Condemnation is Public Acid’s most realized record. Besides great songs, powerful drumming, and riffs piled on top of riffs (tucked inside other riffs), Condemnation benefits from bassist Will Jarrot’s powerful yet adventurous playing and singer Wiley’s unhinged vocal style. Public Acid’s vocals have always been adventurous, but Condemnation features a widened vocabulary of vocalizations. Further, while a lot of hardcore vocals punctuate (or even just follow) the song’s main rhythm, Wiley’s vocals skitter across the top of these songs in unexpected ways, sounding more like a free jazz saxophonist’s lines than John Brannon or Roger Miret. As with every Public Acid release, Condemnation also features stunning artwork by the band’s visual collaborator Thomas Sara. Hardcore records don’t get much better than this, so if you like hardcore records, get this one.