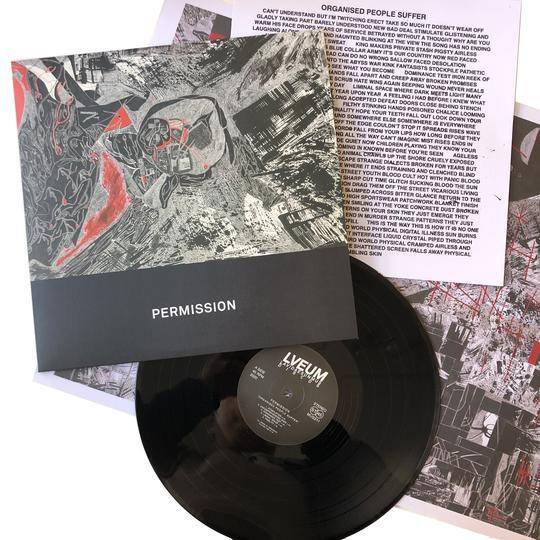 Permission: Organized People Suffer 12” (La Vida Es Un Mus) Organized People Suffer is the 3rd LP from the UK’s Permission, and not much has changed since their first two. The artwork still has the same illustration style, red and black color scheme, and basic sans serif typeface, and the band still sounds like a panic attack masquerading as hardcore punk music. Permission is, without a doubt, one of the most unique bands in the modern punk scene. There’s no one who has ever played precisely like this, combining the creepy vibes of Part 1 or Die Kreuzen with Napalm Death-level speed and vintage NYHC menace. While Permission can sound chaotic and unhinged upon first listen, when you pay close attention you realize that the songs are intricate and ornate, riffs piled upon riffs piled upon changes with extra bits added and subtracted just to keep it as confusing as possible. It sounds like the band is trying to play as fast as they can, or more specifically that the band is trying to keep up with the blindingly fast guitar playing, which lunges ahead of the beat, giving the music the thrilling uncertainty of a house of cards about to topple. It’s not easy listening by any stretch of the imagination, but like a great roller coaster or a scary movie, it feels great to let go of control and let Permission drag you where they want you to go. If you’re looking for catchy melodies or crowd-pleasing breakdowns, you’re barking up the wrong tree, but if you want music that sounds new and articulates a feeling that no one has ever captured this way before, you need this.