Record of the Week: Permission: Drawing Breath Through a Hole in the Ground 12" 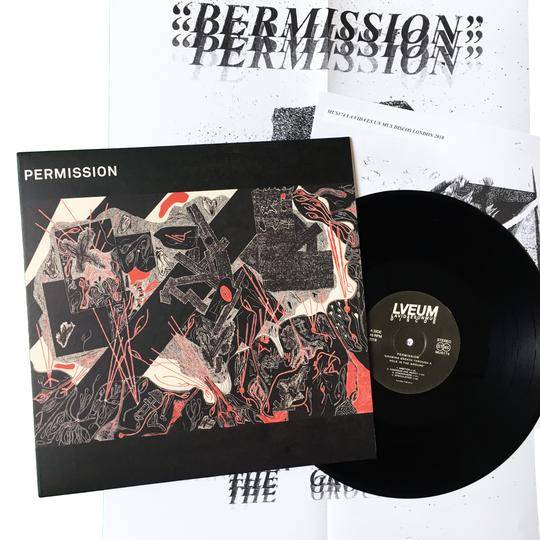 Jeff chose this week's Record of the Week, which is the new LP from UK hardcore band Permission. Here's what Jeff had to say about it:

Permission: Drawing Breath Through a Hole in the Ground 12" (La Vida Es Un Mus) “Drawing Breath Through a Hole in The Ground” is the 2nd LP from UK hardcore band Permission. Not even a year since the release of their debut LP “Contagious Life,” Permission seemingly hatched a premeditated idea to release this follow-up and have it function like a sister album to the first, with the same amount of songs and very similar artwork. The tastefully rendered, abstract cover art implies a sophisticated aesthetic, which seems contradictory to the band’s forceful, primitive execution of the music. But upon second glance, what appears to be chaotic and erratic on the surface is actually methodical and calculated. The dizzying, disorienting atmosphere is done intentionally and masterfully, but just happens to be delivered with bludgeoning brute force. If you’re familiar with the sonic signature of bands like No and DiE, then Permission won’t sound unfamiliar. Guitarist Ralph employs a purposefully out-of-tune guitar sound, which only enhances an agitated, uncomfortable listening experience. This teeth-gritting feeling is fueled by the vocalist’s throat-callousing howls of desperation. Somewhat more guitar-forward than the first LP, tracks like “Atmosphere” have intense, face-melting leads way loud in the mix. The drums are just pounded unrelentingly with blunt aggression. I expect that the end of this recording session yielded some bleeding blisters and chipped finger nails. Weaving between full throttle umpa umpa beats and sluggish, tension-building slow parts, Permission’s songwriting produces blasts of pure intensity while still feeling dynamic. If you’re looking for a record to set as the backdrop for your hopeless struggle to thrive in your deteriorating surroundings, Permission will be a fitting choice. Grip something tightly before dropping the needle.
Back to News