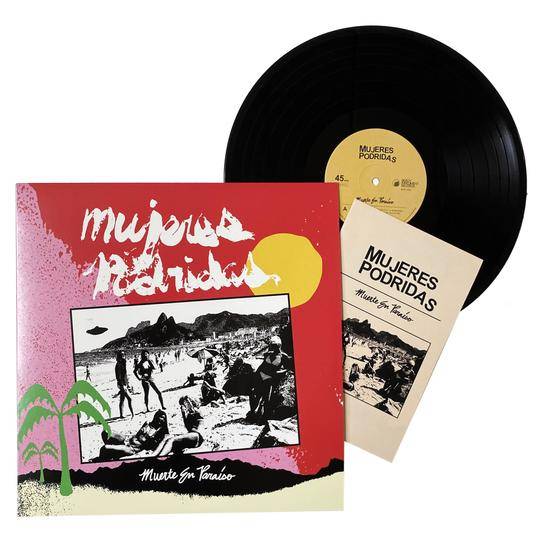 Mujeres Podridas: Muerte En Paraiso 12” (Beach Impediment) This debut album from Texas’s Mujeres Podridas blew me away on first listen and has continued to enthrall me as I’ve worn it into the ground over the past week. Mujeres Podridas features musicians from the fertile Texas punk scene that has given us so many incredible bands over the past decade and a half or so, and if you’re a fan of Criaturas or Kurraka in particular, Dru Molina’s presence on the microphone should already pique your interest. While the musicians who play on this record have exhibited their mastery of several subgenres of punk and post-punk, Mujeres Podridas has a different style, and one I wouldn’t have expected. I could be wrong and perhaps this isn’t an influence at all, but Muerte En Paraiso sounds like it’s steeped in classic Orange County beach punk, both recognizable bands like the Adolescents and Agent Orange and more obscure ones like the Simpletones and the Crowd. Like those bands, Mujeres Podridas plays at a fast punk tempo, but their songs have a traditional pop structure and a stronger, more sophisticated (and slightly somber) sense of melody. Also like a lot of those bands, they have a killer guitarist whose style moves effortlessly from propulsive, Ramones-inspired rhythms to infectious, surf-inflected leads. As Jeff noted in his staff pick last week, Dru also changes up her vocal style for this project, with a more restrained approach that emphasizes the hooky melodies. All eleven tracks are excellent, but a couple stand out as hits, including “Al Revés” with its massive guitar hook and the infectious, post-punk-y “El Chico en la Discoteca.” I already love classic Southern California punk and contemporary Texas DIY punk so it’s unsurprising that this is right up my alley, but even if you don’t share those connections, Muerte En Paraiso is a killer punk record, one of 2021’s essential pickups.