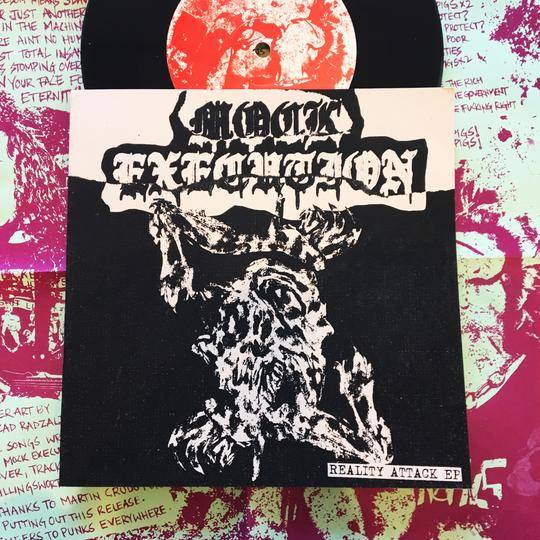 Mock Execution: Reality Attack EP 7” (Lengua Armada) Debut vinyl from this Chicago band and it’s one of the freshest-sounding noisy hardcore records I’ve heard lately. It’s clear that the members of Mock Execution like old Finnish hardcore a lot: you can see one of them wearing a Rattus shirt on the insert and they cover “Cops Are Nazi Pigs” by Kaaos. I hear the Finnish influence on tracks like “Is This the Future?” and “Rohingya,” which are blistering hardcore songs built around straightforward, effective riffs. However, “On the Edge (Panic)” and “Protest Is a Way of Life” sound more brutal and over the top, so noisy and chaotic you can barely tell what’s going on. These tracks don’t sound like Confuse / Gai-esque noise-punk, but rather like the 1980 live set in the recent Discharge box set. In other words, it doesn’t sound like the band is imitating a particular band or style, but rather just trying to make the craziest, most brutal sounding noise they can… notes, chords, and structure be damned. The warm, murky recording only adds to the effect, with noise and feedback crashing off one another like waves in a turbulent sea. If you find a lot of current hardcore stylized and sterile, Mock Execution are a perfect antidote to that.