Record of the Week: Midnite Snaxxx: Music Inside LP 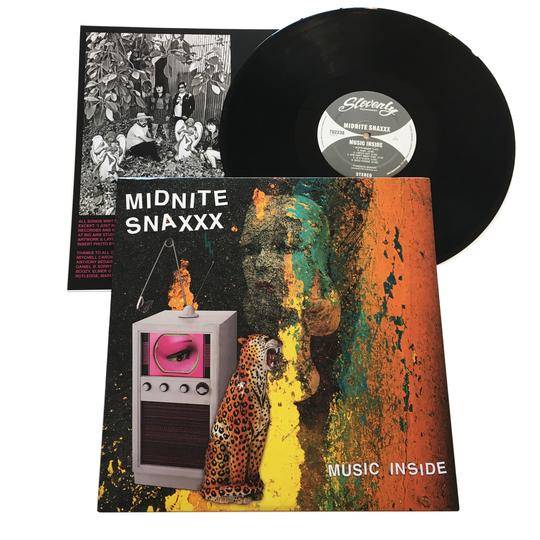 Midnite Snaxxx: The Music Inside 12” (Slovenly) I’ve been singing Midnite Snaxxx’s praises at least since 2011, and here we are nearly a decade later with the band’s third album. How many punk bands these days make it to a 3rd LP? Listening to The Music Inside makes me think it’s a shame that so few bands have that kind of longevity, because this LP is a record I could only imagine a veteran band making. Until this point, most Midnite Snaxxx songs have been sugar rushes of garage-pop energy, and while they had all the pop hooks and sophisticated songwriting of classic girl groups, the Snaxxx bashed out their pop masterpieces with the energy and power you hear on an early Angry Samoans or Circle Jerks record. There are a few songs on The Music Inside that follow this template—“Cyborg” and “12 O’clock”—but most of the album finds the band expanding their sound outward. Dulcinea Gonzalez’s brilliant songwriting ensures that every song is still a hit, but rather than just explosions of power chords and Ramones beats, we get a wider range of sounds, textures, moods, and influences. Tracks like “She Don’t Want That” and “Lights Out” have early Rough Trade Records-type post-punk vibes, while “Phased Out” and “Disconnected” remind me of the second Undertones album, when their music got a little more sophisticated but still kept their punky energy. The more spacious arrangements allow room for a ton of interplay between the two guitars, making every track an orgy of criss-crossing melodic lines. While there may be some garage turkeys who peg this as a departure record, I think Midnite Snaxxx has achieved that rare feat of growing and changing while losing none of the things I already loved about them.