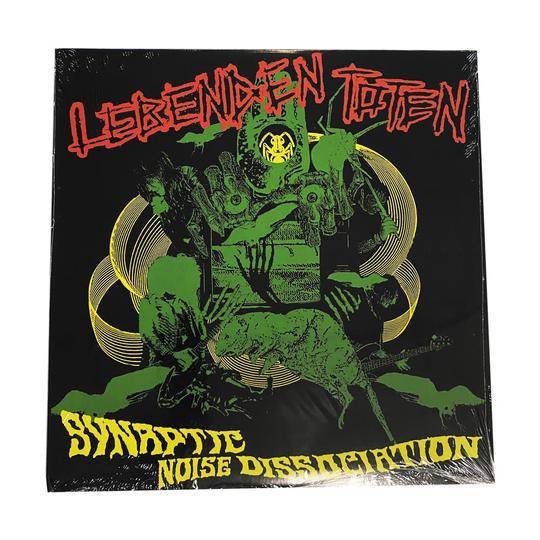 Lebenden Toten: Synaptic Noise Dissociation 12” (Iron Lung Records) The live LP is not a typical move in the punk playbook, which makes it appropriate that Lebenden Toten, who routinely stretches boundaries and expectations, has made such a great one here. If you haven’t heard Portland’s Lebenden Toten, then I envy the time you’ll get to spend going through their dense but rewarding discography. Lebenden Toten started off as a great band who could summon the delicate balance of power and wildness that made Confuse so great, but throughout their long tenure as a band (according to Discogs, their first releases came back in 2003!) they’ve continued to push at the edges of that sound. Whereas noise and feedback was once a blunt instrument aimed straight at your skull, these days their recordings are just as intense, but rich with dense psychedelic textures that feel, if not composed, then certainly artsy and elegant. It’s very much like a Jackson Pollock painting, where a sophisticated sense of design shines through what seems, on the surface, like the embodiment of chaos. As for Synaptic Noise Dissociation, I can see why the band and the label released this on vinyl, because it is blazing. And while the energy level is through the roof, the catchiness of the songwriting and the artistry of this band’s approach to noise never take a back seat. Another brilliant record from one of modern punk’s greatest bands.