Record of the Week: Laffing Gas: It's a Beautiful Day in the Gulch LP 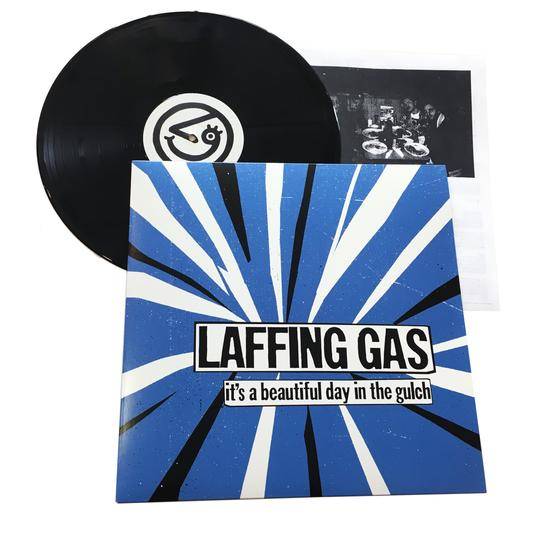 Laffing Gas: It’s a Beautiful Day in the Gulch 12” (Beach Impediment) Those of you with long memories might have a recollection of Laffing Gas releasing a handful of cassettes in 2015 and 2016, but they’ve been radio silent since then. As before, their music reminds me of snotty hardcore punk in the vein of Career Suicide or Angry Samoans spiced up with dashes of the guitar sound and the visual aesthetic of the Coneheads / CCTV axis. Some moments slide more toward an Agent Orange / Adolescents beach punk sound (particularly “On Your Own” and the outros that end each side of the record), while tracks like “Same Cycle” have a straight up USHC style. Combining the snot-nosed catchiness of punk with the energy and blistering tempos of hardcore has always been a winning formula for me, and It’s a Beautiful Day in the Gulch is right in the sweet spot. Further, the variation in songwriting style and tempo from track to track makes it feel like a cohesive, well-developed album rather than a genre exercise. If you’re a fan of Chain Whip, Social Circkle, Career Suicide, and similar bands, this is a recommended grip.