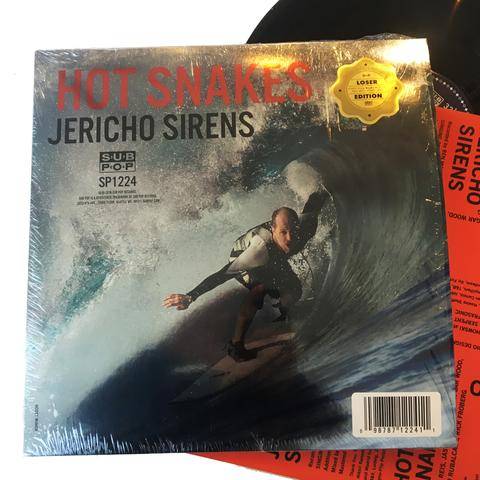 Hot Snakes: Jericho Sirens 12” (Sub Pop) When most bands come back from a long absence or a break-up, they’re content to deliver something that’s simply “good enough,” if not outright bad. Perhaps it’s that bands tend to tepidly imitate their old material rather than trying to push past it, or maybe it’s because they’re not that invested in their “old” project and simply don’t try hard enough. Regardless, none of those are problems with the new Hot Snakes album, as Jericho Sirens , their first album in 14 years, is as good as or better than any of their other three full-lengths. While there are nods to their older material (like the touches of melodica peppered throughout the record) and plenty of songs that are very much in the vein of their old stuff (like “Six Wave Hold-Down” or the anthemic title track), much of the album seems like the band is pushing themselves to play harder, faster, and weirder than they did on their previous records. Whether it’s the blistering fast changes on “Why Don’t It Sink In,” or the wild, Big Black-esque riffing on “Having Another?,” the baroque density of the riffing and the tightness and complexity of the playing (with many of the songs in mega-quirky time signatures) is truly next-level. It’s intellectually interesting, but it’s also viscerally exciting to listen to a band blow through musical boundaries and just let it rip like this. Yeah, they’re pretty much just showing off, but it’s more like someone showing off by driving their car dangerously close to the edge of a cliff than the stiff formalism of a classical music recital. Jericho Sirens is a thrilling listen, and one of the most genuinely exciting records to appear so far in 2018.