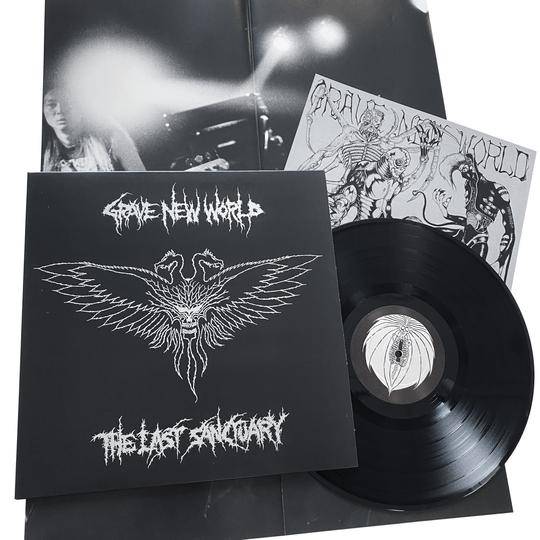 Grave New World: The Last Sanctuary 12” (Bitter Lake) Bitter Lake Recordings once again digs into the Japanese punk archives, reissuing this punk/crust obscurity released in a tiny 200-copy edition in 1992. I had never heard The Last Sanctuary before Bitter Lake announced this reissue. If I was aware of its existence, I must have written it off since the band named themselves after the worst Discharge record (I’m usually an apologist for bands’ under-appreciated later records, but Grave New World just sucks). However, I don’t think I would have loved The Last Sanctuary if I’d heard it in my 20s when I was rabidly acquiring every Japanese punk record I could. I’m happy that this record has arrived in my life when I’m more open to hearing something that surprises me. And boy does The Last Sanctuary surprise! Crow—singer for the band Crow—sings in Grave New World, and if you paid close attention to the records Crow released in the 2000s or Crow’s other project Death Comes Along, Grave New World might not be a total shock, but I’m a big fan of all of those records and I still find The Last Sanctuary pretty out there. Combining metallic crust and psychedelic rock is original on its own, but Grave New World’s implementation of that recipe is even more idiosyncratic and innovative that you might imagine, sliding between and cross-pollinating those genres (and others too!) in ways that sound like nothing I’ve ever heard before. The first track, “Never Ending Winter,” starts off with a harsh noise intro that would make Hanatarash proud, furious drums kicking in but never coalescing into a proper hardcore song. Next is the track “Grave New World,” which sounds like you’re in a practice space with a band working out a cool Amebix-meets-Sacrilege riff, but the room to your left has a really fucking loud band who’s obsessed with Piper at the Gates of Dawn and King Diamond is doing his vocal warm-ups in the room to your right. I could come up with a wacky analogy for every track, but I think you get the point… The Last Sanctuary is all left turns. Yet, for all of its weirdness, it doesn’t skimp on the heaviness or grittiness one bit. While it may be too left of center for some people, this record is one of my most treasured musical discoveries of the past several years, and I’m stoked to wear the grooves out on this reissue.