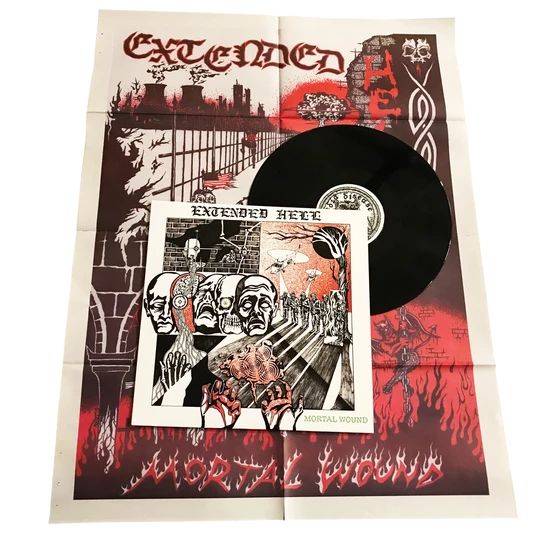 Extended Hell: Mortal Wound 12” (Media Disease) After two beastly 7”s, this debut 12” from New York’s Extended Hell annihilates all expectations. If you have any doubt bands are still making exciting, intense, and artistically vital hardcore in 2019, I would invite you to listen to this LP and convince me it’s not all of those things and more. Stylistically, Extended Hell lies somewhere between the best of the neo-Totalitär-type Swedish bands (think Herätys, Stress SS, etc.) and the brutal, apocalyptic crust of Framtid or Disclose, with the former's finesse the latter's power. While that’s a great stylistic spot to be in, Extended Hell isn't notable because they’ve combined two tasty ingredients, but because they’ve made them their own, spicing their bruising hardcore with some of the most creative and memorable riffing in recent memory. Moments like the primitive non-riff that drives the title track, the Buzzcocks-esque 2-note guitar lead in “Bitter Defeat,” and the almost melodic guitar leads in the chorus to the closing “Dissident” are what I live for, the reason I listen to so many new records: because there might be something as cool as this on it. Given hardcore’s narrow parameters it’s inevitable that we see a lot of records that are great for what they are, but you can't dismiss Mortal Wound so easily. I predict you’ll be seeing this record on a lot of best-of lists come December, and it deserves all the accolades it (hopefully) gets. If you only buy one new hardcore record this year, Mortal Wound would be a fine choice.