Record of the Week: Dark Thoughts: Must Be Nice LP 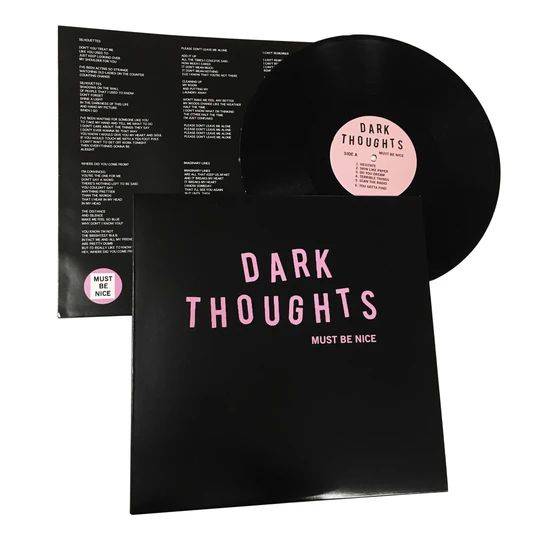 Dark Thoughts: Must Be Nice 12” (Stupid Bag) Dark Thoughts’ 3rd LP is out, and I think it’s their best one yet. If you heard the first two, this one is a little different, with less of a stylized, Ramones-influenced sound. There are very few bells and whistles (except for the literal bells on the climactic closing track), and an apparently simple formula: take some smart and heartfelt lyrics, find a 3 or 4-chord progression that goes along with their tone, and bash it out as power chords with Ramones-style drums playing at an appropriate tempo (mid-paced to super fast, depending on the tone). For most bands, that would be a fast track to a bunch of generic and boring songs, but for Dark Thoughts the minimal ornamentation highlights how great these songs are. The lyrics give me all the feels (as the kids were saying in the not-too-distant past), and every track has the fist-pumping, energetic and anthemic sound that makes Dark Thoughts one of the few pop-punk bands it’s OK for hardcore folks to like. The overall tone and vibe is similar to what I consider the peak period of Screeching Weasel, i.e. their run of LPs from My Brain Hurts through How to Make Enemies and Irritate People, but if you whittled those records down to the faster, darker tracks like “Hanging Around,” “The Science of Myth,” “Every Night,” etc. Like most of the individual tracks, the LP is short, but it's such a thrilling listen that I often play it a few times in a row, something I rarely do with other records. I’ve been playing Must Be Nice since the digital version first went online back in December, and it shows no signs of leaving the “current listening” pile any time soon.