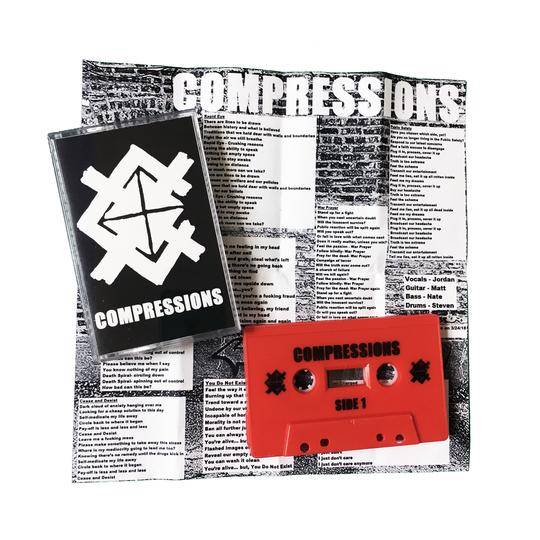 Compressions: demo cassette (Residue) Demo cassette from this killer new band out of Chicago. They have a long ex-members list, but if you’re a Sorry State fan you’ll recognize Jordan from Manipulation on vocals. I’ve always thought Jordan sounded like Dez from Black Flag, and he’ll be hearing that a lot more since Compressions obviously take inspiration from ‘Flag. There are countless bands out there that imitate superficial aspects of the Black Flag sound, but the members of Compressions have put in the work to nail those off kilter, yet locked in rhythms that were a trademark of the Black Flag sound. Compressions are far more than just a tribute or soundalike band though. In much the same way that Disclose saw Discharge’s music as a kind of language they could manipulate and expand upon, Compressions use Black Flag’s quirky rhythms and wild leads as a jumping-off point. “Rapid Eye” is a perfect example. The track starts with a jazzy rhythm that wouldn’t be out of place on In My Head, but segues into dense and frantic hardcore that reminds me of Los Crudos. And then there’s “War Prayer,” which doesn’t sound like Black Flag at all, but rather a tougher version of Toxic Reasons circa Kill by Remote Control, or (more to the point) Direct Control circa Nuclear Tomorrow. If you know anything about my taste in music, you realize that these aren’t comparisons I throw around lightly, and indeed I’m pretty smitten with this demo. Thrown in near-perfect production (crisp, clear, and heavy, yet still organic-sounding) and you have one of the best demos of 2018, hands-down.