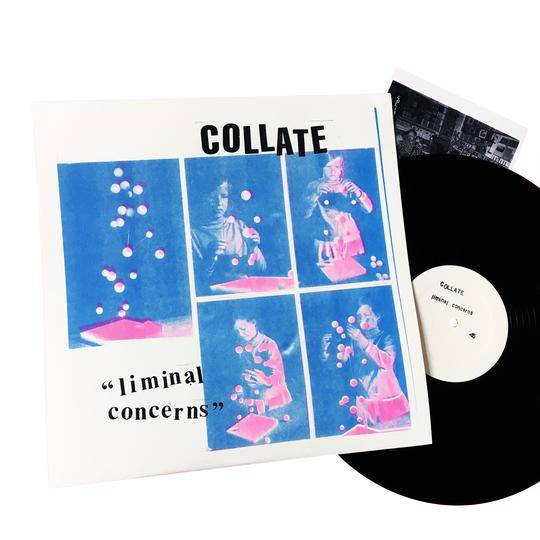 Collate: Liminal Concerns 12” (self-released) Collate’s Material Inspection cassette was one of my favorite tape releases of 2017, and the vinyl follow-up does not disappoint. Musically and visually it’s very much along the same lines; it even has a screen printed jacket that carries forward the same color scheme and aesthetic as the tape’s j-card. Collate remind me a lot of their fellow Portlanders Lithics. Like Lithics, they have that Delta 5 / Gang of Four-style bass-driven post-punk sound, but where the aforementioned bands are more cerebral, Collate are more visceral and aggressive. They dig deep into the heavy bass grooves, but they can also cut loose on a skronky, chaotic no wave part. Despite the aggressive posture and the raw recording (which works well for them), there’s an undeniable pop undercurrent. You'll be singing along with “private negation / public display” halfway through your first listen to “Performative.” As I noted, Collate remind me of Lithics and, to some extent, bands like Gauche or Shopping, but this feels like the underground, punker version of that. It’s sort of like if you grew up listening to Blink 182 and Green Day and something like the Descendents clicks for you. At that point you realize that this is the real shit and the more polished stuff becomes harder to listen to. There isn’t an ounce of fat on this record, and if you’re anything like me, you’ll flip it again and again.