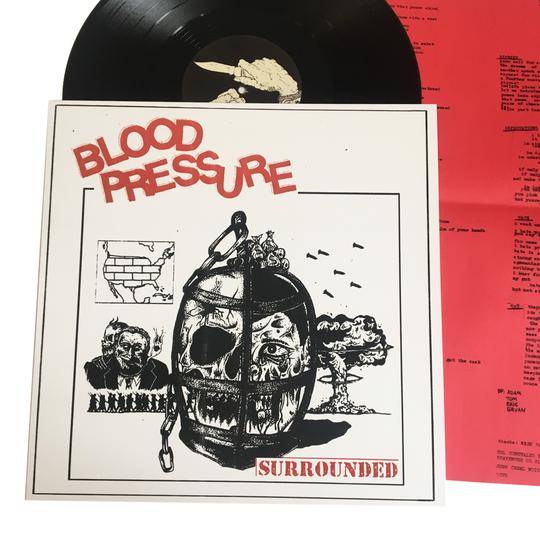 Blood Pressure: Surrounded 12” (Beach Impediment) Blood Pressure’s first LP was one of those records that is so great I had trouble listening to it. The riffs were so ornate and the songs packed them together so tightly that the listener had no room to breathe. I’d often feel like I was having a panic attack by the end of the record. On that record, Blood Pressure were in full attack mode, like when a character in the Street Fighter video game launches a combo move that paralyzes your character and you're unable to do anything but hope you have enough energy to absorb the beating. Surrounded, however, is a little different. Blood Pressure back off the throttle, toning down the complexity and spending most of their time in more of a fist-pumping, in-the-pocket rhythm. Tracks like “Misanthropy” and “Exposed” feel like a new direction in that the mid-paced riffs, instead of being a counterpoint to blistering thrash, are the main course. Even faster tracks like the scorching opener “Recluse” make room for more dynamic songwriting, with that song’s big punches being one of the record’s high points. There are still moments when that dense, anxious sound bubbles to the surface, like the chaotic guitar solo that ends “Futility” or the little off-time intro to “Exposed,” but Surrounded always brings things back down to a rolling boil. If Need to Control was the sound of a machine pushing itself to its limits, nearly to the point of breakdown, Surrounded is the sound of that machine in perfect, well-lubricated working order.