Record of the Week: BB & the Blips: Shame Job LP 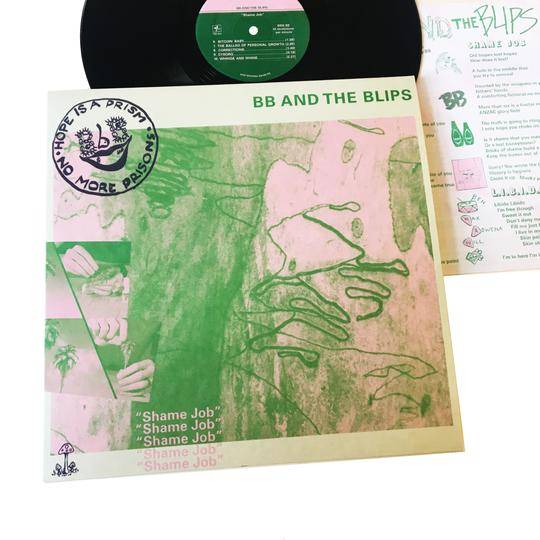 BB & the Blips: Shame Job 12” (Thrilling Living) Debut 12” from this new Australian band featuring members of Good Throb, Semi, and Housewives. I hadn’t heard BB & the Blips’ music before I listened to this record (they have an earlier demo but I missed it), yet I was already in love halfway through the first song. I don’t want to be too heavy-handed with the Good Throb comparisons because they only share one member (Bryony, Good Throb’s guitarist, sings here), but if you liked Good Throb’s sass and/or their fractured, poetic, yet very topical approach to lyrics then you should check out BB & the Blips. However, while Good Throb were stripped down and minimal, the Blips are maximalists, with a big, chaotic sound dominated by a fuzz-drenched, buzzing bass. The band touches on several different styles on this LP, from the manic pogo of “Bitcoin Baby,” to the Damned-esque proto-hardcore of “L.I.B.I.D.O.,” to grinding dirge of “The Ballad of Personal Growth,” but the bass is always at the center, holding down the groove and pushing everything else relentlessly forward. There’s always something memorable rising above the din, though, whether it’s an inventive vocal line or an angular, Buzzcocks-esque guitar lead (like on the standout track, “Cyborg”). Shame Job is a tour-de-force, and if you’re a fan of other bands on the Thrilling Living label like gSp, Warm Bodies, and Lemonade, checking out this record should be a top priority. It’s one of the best things 2018 has given us so far.