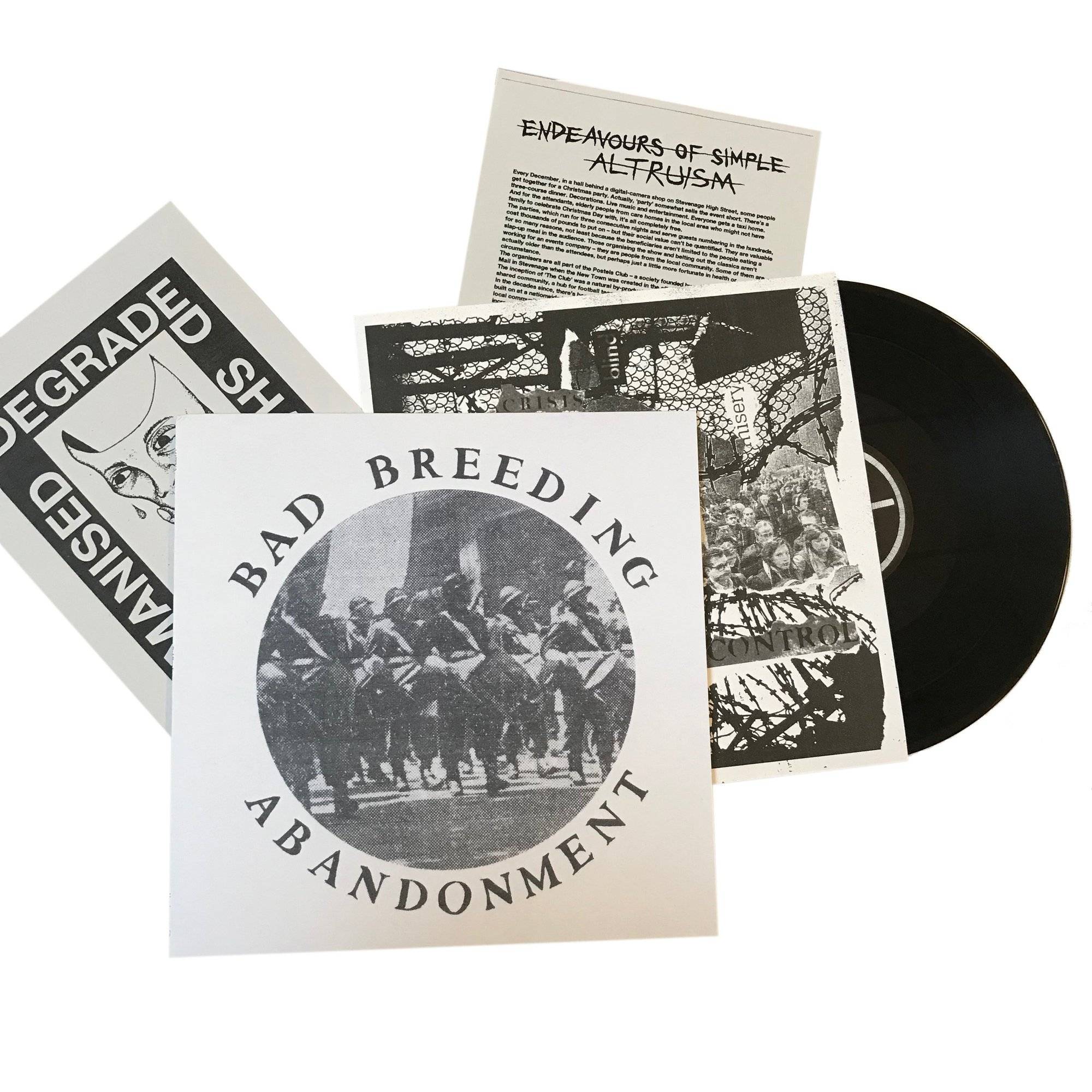 Bad Breeding: Abandonment 12” (One Little Indian) Abandonment is the third time Bad Breeding has graced us with a record, and just as Divide confounded many of our expectations after their great debut, Abandonment refuses to give us more of the same but remains just as gripping. While the core of Bad Breeding’s sound has remained relatively stable across the three releases—their rhythm section and vocals are grounded in the anarcho/hardcore of bands like Flux of Pink Indians and Crass, while the guitarist does something extremely inventive and freewheeling over top of it—the production has been fairly different across each release, which has substantially changed the overall vibe of each record. The first record had an almost retro-sounding recording, very raw and analog-sounding in a way that made it sound like a lost artifact from the Thatcher era (an impression reinforced by the record’s very handmade packaging), but the second record had a much more abrasive sound, with everything pushed really hard into the red. I suppose the production on that record isn’t a million miles away from some of the later Disclose stuff, but it also reminded me a lot of harsh noise and power electronics music, particularly since Bad Breeding are one of the few current hardcore-type bands whose music feels as inventive and forward-thinking as the best stuff that comes out of that noise scene. Anyway, that brings us to Abandonment, which (to me, at least) seems to have a totally different production style than both of the previous records. The sound is big, clear, and uncommonly heavy and powerful. Clearly the band are not hiding behind raw production… they are confident enough to want you to hear every note they’re playing, and the combination of density and clarity reminds me of the best-produced records from the 90s noise rock / AmRep-type scene. Those were records that had a lot going on musically that you wouldn’t want to get lost in an overly compressed wall of sound, and that is definitely the case with Bad Breeding as well. Despite the relatively high production value, there’s still a very organic quality here that sounds like a band playing together in a room (and, indeed, the liner notes confirm that it was recorded live), which contrasts sharply with the very processed sound of Divide. Despite all of the comparisons, Bad Breeding remain a band that is worth hearing because they’re great players and composers, not just because they do a good job of mining a certain style, and the fact that all three of their records are so powerful is a testament to how well fleshed-out and articulated their vision is. For my money, Bad Breeding is one of the most exciting bands going, and if you like underground punk the band—and Abandonment in particular—should be on your radar.