Record of the Week: Alien Nosejob: Once Again the Present Becomes the Past 12" 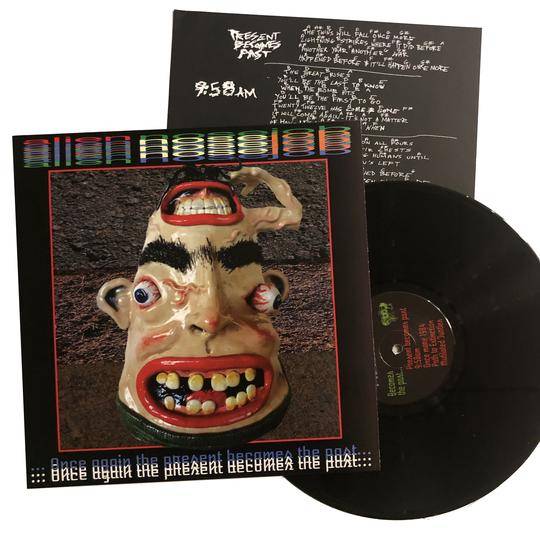 Alien Nosejob: Once Again the Past Becomes the Present 12” (Iron Lung) Alien Nosejob drops his second full-length of 2020 (Suddenly Everything Is Twice as Loud came out earlier this year on Drunken Sailor Records), and I think it’s clear the increased frequency of releases is due to a creative surge rather than a lapse in quality control. Once Again continues the thought Alien Nosejob introduced on the HC45 7” on Iron Lung, presenting a bunch of ripping hardcore songs without pandering to purists. For me, the standout is “Airborne Toxic Event,” the record’s first hardcore track (after a one-minute “Piano Prelude” that starts the record). That track centers around a riff I could imagine forming the backbone of a great Impalers track, though the thinner recording and Roberts’ higher-pitched vocals mark it unmistakably as an Alien Nosejob track. From there, “Air Raid On N.T.” and “Pointed Shears” have a punkier, Career Suicide type of vibe (the latter’s Agent Orange-y riff being an album highlight) and the anthemic “Once More 1984” sounds like the Rikk Agnew solo LP put through a modern weird punk filter. Whether Alien Nosejob is playing ripping hardcore, spacey synth instrumentals, or melodic punk, everything works, and Once Again the Present Becomes the Past feels even more invigorating because it has so much variety and ambition. I wonder if this is too hardcore for the Anti-Fade Records set and too outside the box for people who only listen to hardcore, but for someone like me who likes both sounds, this is a killer record.