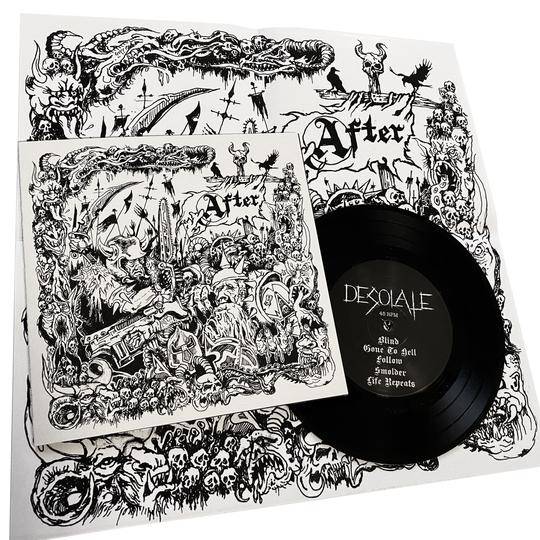 After: S/T 7” (Desolate Records) Debut 7” from this band out of New York featuring familiar faces from bands like Extended Hell and Headsplitters. If you’re itching for new Extended Material, this EP will give you a good scratch with its huge, piledriving sound. While, like Extended Hell, After begs for a Framtid comparison, their over the top heaviness also reminds me of metallic crust bands like Extreme Noise Terror or Doom; however, the drums tend toward Framtid’s more energetic sound (never getting into ENT’s blast-y mode) and some of the riffs have a sprightlier, Totalitär vibe (like “Gone to Hell”). For me, though, After is at their most exciting when they’re at their most metallic, like the bruising opening track “Blind” and the more expansive final song, “Life Repeats,” which builds to a climax of Near Nothing See Nothing Say Nothing-style wild lead guitar. Like Extended Hell or Blood Pressure, After’s music is suffocatingly dense, so take a deep breath before you drop the needle on this one.