by SETH April 17, 2018
So before we get into the negative, let's focus on some positive. No Love's LP is done being mixed and has been sent off to be pressed. We should be getting test presses any time now. We're all super excited about it and decided to share a track and the artwork. I'm very proud of it and can't wait for people to hear it. Here's the opening track Choke On It. 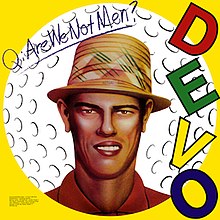 Devo: Are We Not Men?
How many times have you gone into your record collection only to see this face staring back? Something about him and his Sears catalog style just really puts me off. This is going to get a little crass compared to the usual comprehensive and intelligent critique you expect from Sorry State. This guy realy looks like he just ripped the worst fart though and is trying to pretend not to smell it. "Oh really it smells like someone farted? I don't smell anything." Something about his smarmy face just really puts me off. Sadly the rest of the design (minus the golf ball, well actually maybe I would enjoy that without the face) of the album is amazing and top notch. Also I've already gushed about how much I love the music on here. There are other records that fall into the same category of Faces Seth hates to constantly look at but the albums are nowhere near as strong musically, well let's face it few albums are.
Atleast their choreography and outfit game was strong.

The Adverts: Crossing The Red Sea With
I think I actually posted on Instagram recently about how this is one of my favorite albums ever. Every song on it is amazing. I don't think there's a snoozer on here. It is amazing. Sadly I don't think the artwork comes anywhere near the music. Really I think it's just the colors that really throw me off initially, it's a really bad combination with an even worse composition, all just kind of smeared together to frame a barely interesting picture. My amazing wife took me recently to a new art exhibit based around light and sound and it was amazing. Some of the pieces there might have been my favorite pieces I've seen in any gallery.... except for one. It was seriously a twig hanging in front of a screen casting a shadow. On the screen there was a 3D model of the tree it was taken from being shown. It wasn't visually appealing in any real way. I'm sure it had some deep meaning about nature and technology and whatever but I'm shallow and go to an art gallery to see things that are visually appealing to me and that I find pretty. I know that's not everyone's taste or choices on why and how they consume art but it's just me (I don't go to art related things often). ANYWAYS, this artwork might have a point and be saying something but really I just think it's ugly and it bums me out to see.
Here's the cooler version from the Fire Records reissue -

Really both of these albums are top tier and maybe I just wish for more from them. I'm still going to listen to them non-stop though even if I have to look at artwork I hate.
Hospice: S/T Cassette
Mr. Green has never let me down with any release he's been involved with. I am probably officially on fanboy level by now. This is how to mix synths and punk correctly. Also mixing in some low level nerd nostalgia with the song Dungeon Level Four. I was increadibly excited today that there were not a lot of people hanging out at the store for extended periods today because it let me listen to this on repeat like 3 times. Maybe I'll have to do a "Cassette of the Week" post just so I can gush on this in long form.

RIKI: Hot City
If Hospice is a lesson on how to mix punk and synths than Riki is a lesson on how to write new-wavey post punk and not be as boring as a pet rock. Lots of great melodies and songs that seem to just go. Although Chubb probably wouldn't agree this definitely rides that "Slap Wave" (tm Sorry State Records 2018). Riki definitely feels like they're living in the 80s and not just wishing they were. Lots of very Depeche Mode feels and a heavy hand of early Madonna, maybe some Bananarama tossed in. It's super catchy though and totally worth checking out.
Uranium Club: Live at Arci Taun 12"
No matter what you want to call them it's evident that Uranium Club are a force. This serves up songs from their two lps with even more of a bite than on their studio recordings, along with some silly banter. I've talked about how I'm not super huge into live records but I've really been diggin this one. Maybe it's due to them never coming to NC and never having gotten the chance to see them. Anyways this is silly and great and I recommend it.
RECORD OF THE WEEK FOR A REASON! (that's a link and you should click it and go read Daniel's awesome write up)
Back to News