If you've been keeping up with our latest blogs, you'll know that each of us here at Sorry State are writing a "Dear Santa" letter of sorts, listing our most-wanted list of records for Christmas! What better time for me to provide this information than after New Year's right? Santa's already made his rounds, but it couldn't hurt to drool over records I haven't gotten my greasy fingers on yet. I know haven't been bad enough to deserve a lump of coal, but who knows if I've been nice enough to get any rare records. Not hugely shocking, but my personal list of most-desired records is made up entirely of rare hardcore 7"s. If you'll indulge me a bit, I am lucky in a sense because there are a few records that if I didn't have would absolutely make this list (ie Pick Your King, or Wind of Pain). I will say that my choices are not necessarily the craziest records in terms of value, I'm not asking for a red cover Minor Threat 7" or anything. Sure, some of these choices will set you back $100 or so, but my wants are formulated more-so on the idea of thinking to myself: "Damn, I wish I had that." Let's get into it:

1. Totalitär: '80s era 7"s - If you know me and my taste in punk, I have probably made it abundantly clear that I am a huge fan of Totalitär and Swedish hardcore in the like. And while I have all of the 12" releases and handful of 7"s, I have not made a huge effort to grab the first three releases from one of my favorite bands. It's not even that I think Totalitär's first three 7"s (Multinationella Mordäre, Vänd Dig Inte Om, and Luftslott) are their best material. That's not to say I don't love them, because I still find the idea of owning the early releases of this band to be quite alluring. It used to be that each of these would go for around $30, but thanks to us record nerds and the ever-expanding legendary status of this band, the records are only getting more expensive. There's just a part of me that doesn't want to take the plunge on discogs...


2. Mecht Mensch: Acceptance 7" - There's just something about 80s hardcore from the Midwest that speaks to me! I don't know if it's because of the vast plains of corn fields and boredom, but bands from this region always seem to be just a bit freakier. And while I love Die Kreuzen and Necros as much as the next guy, the Mecht Mensch 7" just has this mysterious, austere quality to it. I do have the Master Tape comp with Mecht Mensch on it (and No Labels, yess!!), but this band's lone record is what I truly would like to add to my collection. Maybe there's also something I find interesting about bands that only have one proper release -- it's like a perfect little moment. And of course, it does rip!


3. Ultra-Violent: Crime for Revenge 7" - Yet another band that only has one proper release, and only 3 songs! Luckily this 7" was reissued not too long ago, but according to Dr. Lupton, the repress just does not compare to the explosive sonic power of the original Riot City press. Three perfect tracks of UK82 fury! Also the way this recording sounds is so perfect, love the disgusting guitars. Hard to believe 6 minutes of music is worth so much these days :/


4. Juden Souchi: Dead Line 7" - My last pick for my Christmas list is more of a deep cut. I discovered Juden Souchi during a period of trying to learn as much as I could about early Japanese punk. I think my buddy Shane, who is quite the archivist, had this in giant folder of Japanese punk on an external hard drive. It remains one of my favorite Japanese punk records I've ever heard. I found everything about "Dead Line" captivating: catchy riffs, great vocals, really cool graphic design with the artwork -- just love it. I think this band had one other release, but not sure if members were in other bands. I'm pretty sure this was originally released on flexi, so who even knows if I could find one in good shape or if it would even sound good? Still, this record makes my mouth water and probably wouldn't pass up a good deal on a copy.
Alright, now I'll talk about some records in a more reasonable price range:

Haircut: Shutting Down 7": First vinyl release from this VA hardcore band. When I first heard Haircut's demo tape I remember them sounding more rocked out and catchy. But on this new 7" they've gone in a much more riffy hardcore direction, and I'm not complaining. Sonically, this thing is just pummeling, but the riffs and vocals are still pretty sassy.


Lux: S/T 12": Somewhat condensed from what I wrote on my Youtube channel: After a killer demo tape in 2016, Barcelona-based hardcore punk band Lux return with a proper full-length for 2017. Lux fuses UK82 style pogo punk with the interesting rhythms of anarcho punk. The catchy basslines are super loud in the mix and drenched in chorus, bringing a gothy sensibility as well. The vocals almost have a shrieking, banshee like quality at times, but what makes them distinct is the sense of melody and vocal hooks, which are truly rare in hardcore punk these days. Clocking in at 11 songs in just over 23 minutes, this record is a bit longer than your usual long-play from a punk band. It's a proper album, and I think Lux gets away with it by holding interest with memorable and dynamic songwriting.


Tarantüla: Weird Tales of Radiation and Hate 7": 2nd EP from this Chicago punk band. I loved their first 7", bringing a melodic sensibility to Cülo musicality. And if that were true of the first EP, this new outting pushes even more in that catchy direction. Maybe exchanging Ramones influence for a dash of New Age-era Blitz. Great stuff.


Sial: S/T 12": Absolutely vicious release from this Sinapore-based hardcore band. This recording is super gnarly and abrasive, but the drums are still pounding and heavy. Sial mixes the grating guitar sound of 90s Japanese punk and mixes it with a UK82 backbeat, and the result is primal and powerful. I bet this band is intense live.
There's not a lot to say on the personal front. A bunch of Raleigh rockers had a cool New Year's Eve party at The Bunker. It was also a costume party. Me and the rest of Scarecrow dressed as the crew from the Wizard of Oz. I know someone recorded us playing, so hopefully I'll be able to post that next time.

I mentioned this gig in my previous blog post, but the flyer below will be hot gig for NC! Every time Glue has played here it's been a good time. 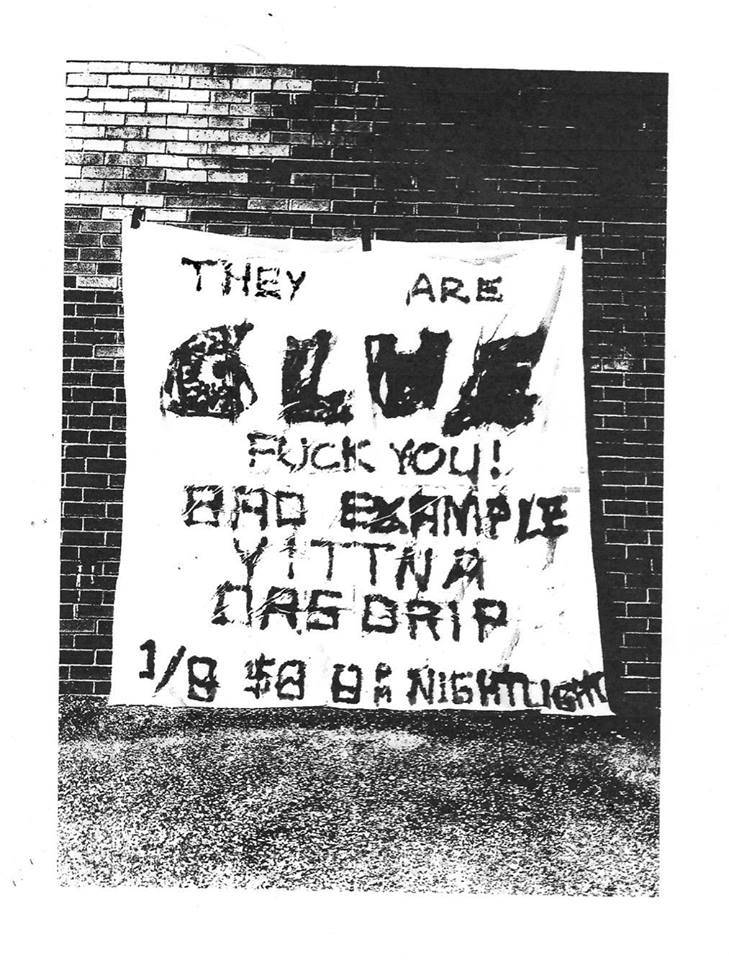 I think that'll do for this round. Thanks for reading!