Live Fast Jeff Young: Vol. 10 - Picking One Side Gives Me A SPLIT-ting Headache

So, this time around for our blog topics we are talking split records. Hopefully I don't give the impression that I'm reducing all readers to n00bs, as if they had no knowledge of this subject, but let's assume we're all unitiated: "Splits" are records in which at least 2 different artists release material shared on one record, usually each artist designating one side as their own.

For some reason, when we decided that splits would be our blog topic, I remember thinking that this is somewhat a divisive issue. I know for a fact that there are some people out there, even hardcore kids and punks, who think that splits are downright lame. I've had many a friendly debate about it, and usually the commonality that kills the argument is: "Well what about the Faith/Void split?" Generally, this record is agreed upon, where, for punk and hardcore at least, it's a legendary moment that set the standard for what a split record should be like. Still, I've honestly had people respond and ask: "Okay, well name one good split besides that one..." Personally, I think there are plenty!

So the question becomes: What makes for a good split? I think that beyond there being strong showings by either artist, it's important to factor in the concept that the two halves make a stronger whole. Some splits (particularly from the 90s) are plagued by a suspicious feeling that bands only released a split to save money... Some of these same releases are also guilty of having a joint-release between 5 different labels (not exaggerating). Needless to say, I would not qualify these as good examples. There are some splits in my collection where one side just kicks the other sides ass -- basically, the record never gets flipped over. As much as I like Chaos UK, not only are the Death Side tracks better on the Chaos UK/Death Side split, but it's my favorite Death Side material period. I also might throw in the No Side/Out Cold split in this example, because even with Out Cold being one of my personal favorites, the No Side tracks are just so killer! I guess I could have committed to the blog concept of "Japanese bands that are better than the band they share a split with" theme.

I think when I write these blogs, I sometimes have deepset self-conscious feeling about picking records that are too obvious for a point of discussion. But when I think of a split that features two bands that contribute two halves that make on powerful whole, I had to choose the Totalitär/Disclose split. I know, not a huge stretch for me, but how appropriate to choose a record on "Split Day" that features artwork depicting two halves of a yin-yang!?

Released in 2001, this split LP features material from each band that was recorded in 1998. When comparing these recordings against each band's individual releases from this time period, this when both Totalitär and Disclose were in their prime in terms of delivering intense material. Totalitär released the Vansinnets Historia EP that year and Disclose was hot on the heels of the Aspects of War 10" and would release Nightmare or Reality the following year. 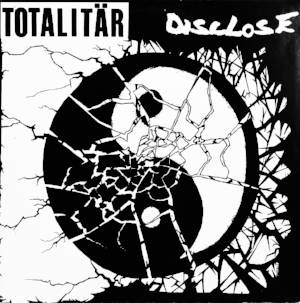 What's interesting about these two bands sharing a record together is that each band stayed true to their sound throughout the course of their existence. While Totalitär began in the mid-80s, both them and Disclose were primarily active in the '90s. Each band synthesized their own brand of Discharge-influenced punk into a unique interpretation. As is apparent on their first track on their side, "Vi Brutaliseras" (link below), Totalitär is at their most vicious. Poffen's voice sounds particularly gnarly, and the recording only hilights the punchy, unrelenting drums and perfect, memorable riffs.

Disclose released a good majority of the tracks on this split previously on the Total Dis-Lickers demo, but thank the lort these tracks got a proper vinyl treatment! Perhaps with a reference to Shitlickers in the title of the demo version of this release, it was pure destiny that Disclose would re-release some of these songs with another Swedish band. The song "Endless War", one of the few tracks exclusive to the vinyl release of this Disclose material, is a definite hilight, a force of pure Dis-fury.

You could argue that with a limited variation across multiple releases that neither band deviates from their signature sound. Still, each band also delivers material that is emblematic and consistently as powerful as any of their other releases. I might even argue that this record has some of each band's best efforts in their entire catalogues and that each side of this slab of wax is just as powerful and raging as the other. Picking a favorite is nearly impossible, but also worth a headache over.


While this record is pretty hard to find these days on vinyl, a recent boot of the Totalitär/Disclose split has been released on cassette that sounds great! Do yourself a favor and grab a copy at one of these places:

Alright, now let's talk about some other records that have come out recently (or at least since my last blog). None of these are splits:

Padkarosda: Tetova Lelkek 12" - Definitely topping my list of favorite new releases this round is the new record from Budapest punk band Padkarosda. I was a big fan of some of their previous full-lengths released on cassette, and I believe this new LP is their first proper vinyl release. Granted, I don't know much about Hungarian punk, but to my ears, Padkarosda has such a fresh and unique sound. On the previous tapes, I remember thinking their sound had elements of hardcore, but with a dark sense of melody and atmosphere. This vibe has remained consistent on Tetova Lelkek, where moments almost bring Die Kreuzen to mind, but with a distinctly Eastern European flavor not unlike Tožibabe or Siekiera. When listening to this new record, I think that there are fewer up-tempo tracks in exchange for the spooky, post-punk elements to become the primary focus. Great listen, highly recommended.

Ghoul: Night Out 12" - Compilation LP featuring a collection of tracks from this Japanese '80s punk band. While I had heard Carry Out Fucking, I wasn't super familiar with Ghoul or their association with other Japanese bands like GISM. I will say that for being an earlier Japanese hardcore band during the period where many noisier bands were releasing flexis, Ghoul stands out as being way heavier for the time. That said, the comp LP has a lot of material I'd never heard including a track released as a one-song flexi and some later era material where Ghoul became very thrash metal sounding. To me, this pressing sounds really great and is an interesting glimpse at an underrated Japanese punk band.

Beta Blockers: Stiff Prescription 12" - Debut release from this hardcore punk band out of Leeds, UK. If I remember correctly, this band shares members with The Flex and some others. Beta Blockers don't really have that primitive 80s hardcore vibe like the members' other bands though. Rather, almost more like DiE or No, this band is much noisier and abrasive in the production. Where the sonic landscape is almost harsh and claustrophobic at times, I like how they break their intense bursts with more subtle and dynamic interludes. But with a track like "Who", Beta Blockers manage to creep some melody and hooks into their brand of noisy weirdo hardcore. Killer first release.

The Cowboys: Live At Tony's Garage 7" - On paper, The Cowboys seem like a band that I would normally not really enjoy. The front cover of this new single on Feel It finally depicts the members' physical forms, whom I'd previously never really been able to visualize. Frankly, they look pretty normal. And when you listen closely to their music, they're not even really very punk. They're kinda more surf-country? Something about the singer's vaudevillian approach to singing makes the band seem tongue-in-cheek, maybe they're all just trolling us? I don't know. But still, I find myself thinking the songs are really good! This 7" is a live recording that features a few re-recordings of songs that appeared on previous albums. The energy of these performances is smile-inducing, I gotta say, and are genuinely well-performed. I guess I won't be able to help myself when I start finding the country twang of "Laugh Enough" stuck in my head later on. Oh well.

Army: S/T cassette - We got in a few tapes from this I Hate I Skate label out of Austin, TX. Between Enemy One, Skeleton, and other bands from this crew like Nosferatu, this Army tape might be my new favorite. This band is ferocious, kinda reminding me of Necros, particularly in the drums where it's not sloppy, but kinda manic and powerful simultaneously. Army has crushing mid-tempo sections but it's not overly tough and also pretty catchy. Also, for some reason the vocals kinda remind me of Zach from Socialcide. Live, I would wager that this band just goes berserk, impossible to contain. While not an actual live set, the video I posted of Army below is a public access show of sorts. I thought this video might give a more vivid impression of Army, more-so than the tape. Skip to 4 and a half minutes in to see the singer vomit. Rad.
Here's some upcoming punk shows in NC:

There might be some more coming up also that it's my fault for forgetting, I'll try to re-update next blog!

I think that'll do for this round. As always, thanks for reading!