What follows is a series of questions that Daniel from Sorry State Records posed to Fitness Womxn, who answered via email during the winter of 2019-2020, just as their LP New Age Record was being released on Sorry State. New Age Record is out now and available on vinyl directly from Sorry State as well as digitally through BandCamp and all of the major streaming services. 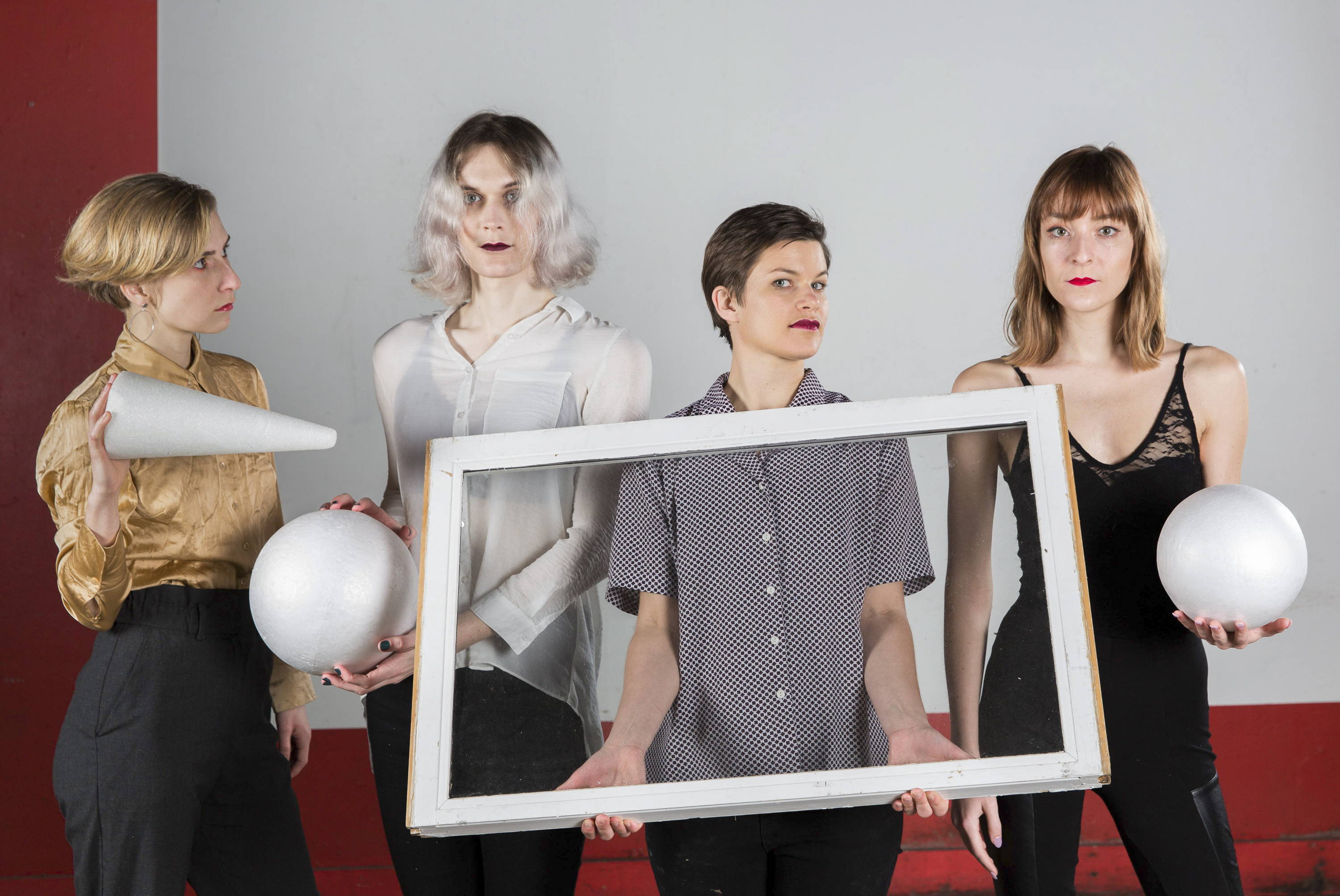 First of all, can you tell us when and how Fitness Womxn came together?

fw: Yes and no? It began as a non-serious cover band. DW, TB, and DD wanted to learn to play instruments, write music, and have some fun while doing it. For the first few months or so of playing together, we would pile into TB’s room and jam on covers from a variety of ~rock~ stuff: the Cramps, Delta 5, Gang of Four, Babes in Toyland, the Supremes, feedtime, … Fall Out Boy...., among others >:}. Eventually, we got more comfortable with our instruments and writing our own stuff. After releasing Macho City, we felt like it was time to branch out from the three-piece and so VV joined on synth to help us achieve final form. We all knew each other from doing college radio in the Triangle (WXYC 89.3 and WXDU 88.7) and this project felt like a great way to get further into our interests in music/creativity as well as the local scene.

It seems like Fitness Womxn is more than just a name--it seems to be a concept that ties together a lot of the subjects you address in your lyrics. What have you learned by diving deep into these concepts over the past few years? Does the name Fitness Womxn mean something different to you today than when the band started?

fw: The name originally came from a goofy reference—it was just a placeholder. We thought we would change it eventually, but by the time our first show happened we couldn’t think of anything else that really worked. It also efficiently conveyed our trans, queer identities. It grew into being a great metaphor through which we could articulate the pseudo-robotic and program-based reality we try to address in a lot of our lyrics. In that sense it did evolve over time. Expressing our weirdo, manic, put-on-but-quickly-cracking aesthetic in the Fit Bits was a very natural thing. It’s hard for even us to tell if the name just fit (ha…) what we were trying to do with project or if our sound molded into the name itself.

Unfortunately, we’ve had to stop playing together as Fitness Womxn for now because bandmates moved away and it was time for other projects to come to life. We love to joke about a "Wellness Womxn” tour in 40 years, though! It would probably be less on the dumbbells and squats and more on the herbal tea and like… listening to actual new age records.

Speaking of lyrics, I wonder what your lyric-writing process is like. I think Fitness Womxn's lyrics are incredible. Like a lot of my favorite art, as soon as I think I'm starting to get a handle on what it might "mean," that meaning seems to slide out from under me, opening up new possibilities for interpretation. Do you usually have a topic in mind that you write lyrics about, or do words or sounds or snippets come first? Do the lyrics usually get composed before or after the music?

fw: It's different for everyone. The process of writing any of our songs starts with one member bringing a small piece of a song to the group, whether that's an instrumental bit or a lyrical snippet. From there, we would just fool around with stuff and record a lot of jamming out. After listening back on some of the recordings, we normally we find a thing or two we liked and grow from there.

DD: I can never write lyrics before music. I focus a lot on how the words work with the music. I'll try a ton of different lines until I hit one that feels good. I never intentionally pick a theme before I write lyrics but I always end up one by the end of it. I learned a lot about what is important to me in the moment when I wrote lyrics.

TB: The lyric writing process was always morphing for me, whether lyrics happen before or after music. But almost always, I came out on the other side of writing lyrics feeling some sense of relief about something. So, ya know - Art Therapy, Baby!!!! A general theme for me when writing for FW had to do with relations to dissonance. I often tried to capture a visceral physicality of struggling to find resolution for an internal conflict. Using some version of humor frequently played a part in that. As for finding the lyrics, sometimes I had to sift through a pile of word vomit and other times, phrases just appeared in day-to-day life. It never felt forced.

DW: One of the arguably best things about FW’s lyric-writing process is writing something that doesn’t start as lyrics at all. There’s no topic. And maybe they should never become lyrics, but by the time practice is over, these words you had to get out regardless of the project are taking on new contours, new intonations, eating up space in someone else’s brain. Having someone else sing the words you write to the rhythm of your own inner experience completely changes what they mean in the best way.

You've said in a few different places that you're inspired by the no wave movement. When I think of no wave I tend to think of music that's noisy or skronky--stuff like DNA or the Contortions--but I find Fitness Womxn's music quite tuneful. Can you elaborate on what inspires you about no wave and how that manifests itself in your music?

fw: There are quite a few genres that heavily-influenced the written music of FW - mainly post-punk, disco, and no wave. Why we started leaning towards the “No Wave-inspired” descriptor later in the game was to loosen up some potential genre boundaries for us. And while we are definitely inspired by No Wave, we didn't try to be a No Wave band.

We love the playfulness and tongue-in-cheek elements that No Wave uses in distorting and deranging familiar themes. We wanted to channel a similar energy into this project. Easy was written explicitly with the Contortions in mind. Creatures sounds the way it does because of DNA. But many of our songs drew influences from other genres. Our writing process was always super loose. We ended up writing stuff that was influenced more by the moment in time when we wrote it over a particular style.

For lack of a better term, there's an "artiness" to Fitness Womxn's music. I think some of you might also have backgrounds in and/or be involved with the art world currently. Would you agree with that assessment of your music? Do you have any opinions on how the art world and the underground punk scene do or should relate to one another?

fw: The way we wrote music didn't feel any different than the way we make anything else, performance, visual art, etc. All of it came from a similar energy and it always came from collaboration. Almost all of the artwork we made for FW was made in a similar spirit of our music writing process. It’s always been mashed together bits of time and feelings from each of us.

We talked about No Wave as an influence because, in some ways, it felt like a chance for us to have no rules. Maybe that’s our interpretation of how No Wave stuff exists in context of a larger “underground punk scene,” but this project was always more about an energy rather than a tangible sound or genre. We guess that’s art or something? Besides, didn’t genre die? 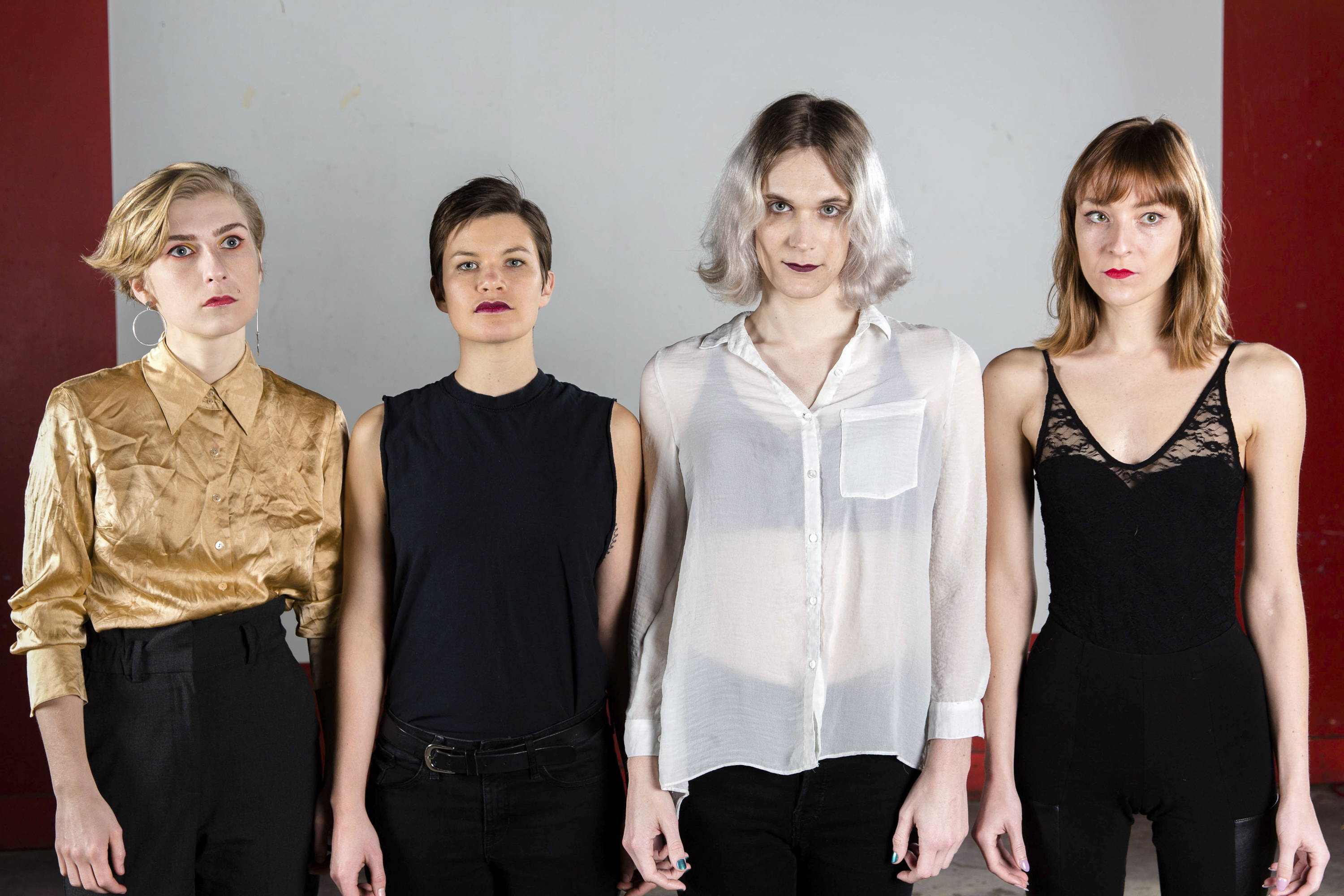 On the whole, New Age Record seems less angry than your previous release, Macho City... at least there aren't any moments as venomous as "Tastemaker." Do you think that's the case? If so, what would you chalk that up to?

fw: There are many ways to express anger. We think that New Age Record is actually a lot more venomous than MC. There's a lot of really deep anxiety in NAR that didn't manifest in MC. This probably has to do with the fact that MC were the first songs that any of us have ever written. Yelling, being visibly angry was a new cathartic experience.

But no outburst is eternal. With time, we found a way to interact with these emotions in a different way.

On New Age Record you redo a couple of songs that appeared on previous releases (like "Easy" from American Idylls" and "Rag" from Macho City). The versions on New Age Record are substantially different and it's easy to see why you'd want people to hear them, but as someone who's played in bands over the years, I'm wondering how you came to the decision to re-record them. Where you trying to capture something in the new versions that didn't come across on the earlier recordings?

fw: We got a new band member! These songs didn't feel "done" the first time we recorded them. VV added new parts to these tracks, rearranging them into new songs. The new forms needed to be shared on record. The original versions of some of these songs were so tightly wound that it presented an interesting challenge to contribute to them. Others had a clear opening for more elaborate synth parts, it felt like finding the last piece of a puzzle hidden behind the cardboard flap of the box.

Also, those songs still felt very important to us. They were what we related to and what we worked on in that moment. All of the songs for NAR were written closely together. We wanted to put out and finish a record before DW moved away and so we took what we had and committed to it. It's a special record to us because it so completely captures the energy of that moment in time.

We think a lot of the strength of the record is that we didn't work on it over a long period of time. We forced ourselves to make quick decisions, which kept us on our toes during recording. We hope this record keeps listeners on their toes in turn.