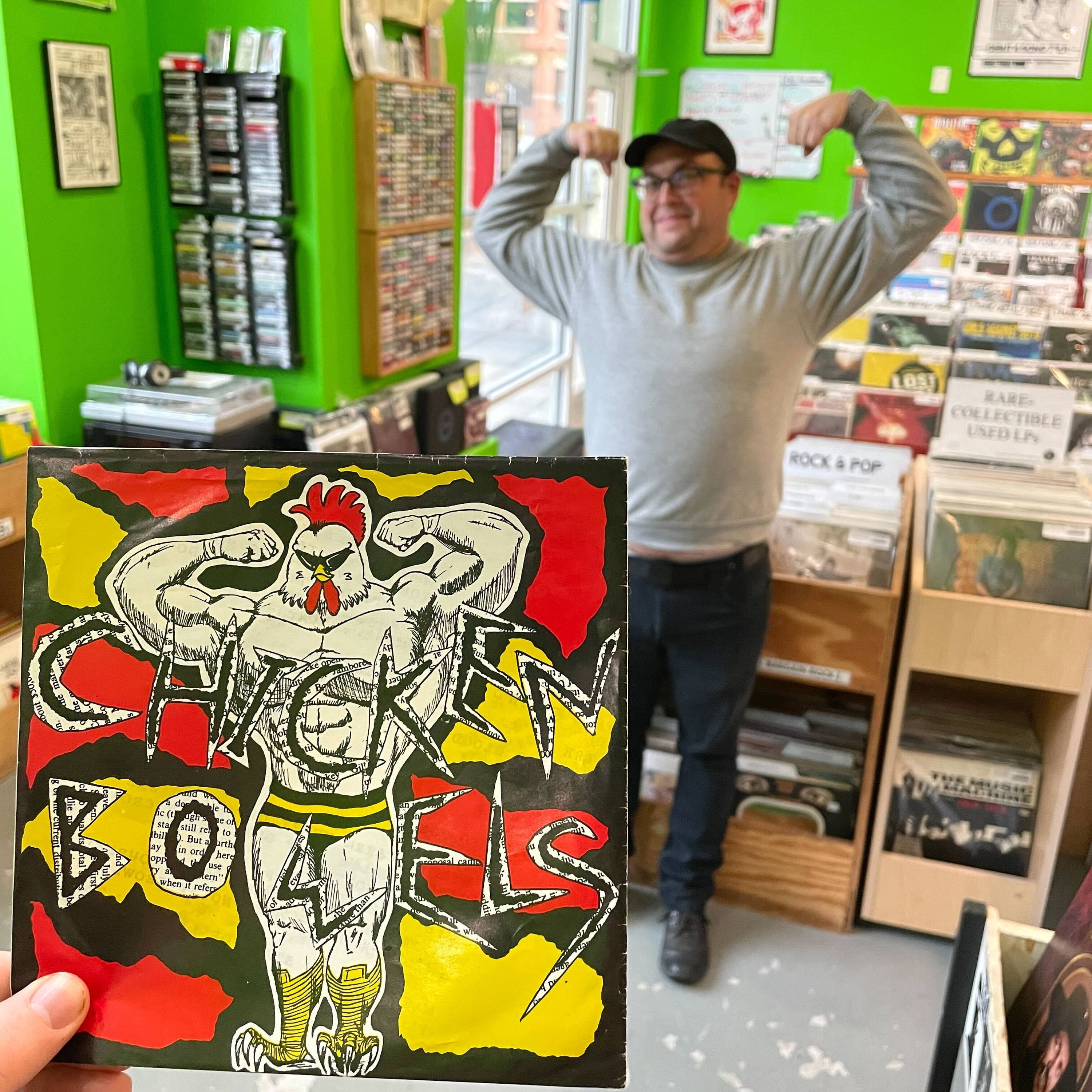 This week I slayed a white while.

Before I get to that, though, a short rant. The word “grail” in relation to record collecting always grates against my ear. I doubt our sophisticated and cultured Sorry State readers would use so uncouth a term, but I see it a lot in the wider world of vinyl, used among the same people who use the word “vinyls” (a word that also grates against my ear, but so does the weirdly conservative grammarian backlash against it, so I just stay out of that debate altogether). I guess the problem is that the word gets overused, as in “I went to the record store today and found three grails!” To me, a grail is not just an album you like. If you think about the metaphor, the Holy Grail is something you spend a lifetime searching for, never knowing whether it exists, much less whether you’ll find it. If any punk records have that status, it would only be ones you’d be lucky to see, let alone own, in your lifetime… I’m thinking of things like the Necros skatepark sleeve or the Minor Threat Out of Step test pressing with the silk-screened sleeve. This is a class of records even beyond things like the first pressings of the Minor Threat EP or Nervous Breakdown. There are a thousand copies out there of both records, and even though demand outstrips that supply to where their values have gone through the roof, they change hands with some regularity. A grail, on the other hand, is an item of almost mythic status.

The white whale, though, that’s an appropriate metaphor for this week. The white whale, Moby Dick, literally took a piece of Captain Ahab, setting him on a lifelong journey for recompense. Beyond simple revenge, Ahab’s quest for the whale is existential… he will never be whole again until he conquers it. Unlike the Holy Grail, the white whale doesn’t exist in that strange space between myth and reality… it’s real, and Ahab encounters it several times, but never gets the best of it. This is my story with this Chicken Bowels 7” though, unlike Ahab, my tale ends in triumph, not tragedy.

My story with Chicken Bowels goes back to the early 2000s. I’m sure I’ve mentioned this several times in the newsletter because it was such a formative event in my relationship with punk music and record collecting, but one summer my friend Joel ceremoniously (Joel loves ceremony) dropped off his entire record collection at my house and left it there for several months. Joel was a manic collector of Japanese hardcore, and had all the classic records like Gauze and G.I.S.M. and the Comes and Lip Cream and Death Side when I was obsessed with those records, but only knew them from mp3 files. Holding those artifacts in my hands only increased their mystique and allure. Joel also had a ton of under the radar rippers I had never heard before, and I listened to every single record in his collection that summer, soaking up every scrap of knowledge I could. I visited Japan twice in the next couple of years, and with a couple of exceptions (I still don’t have an original copy of Fuck Heads… at the time Joel had two!) I more or less replicated Joel’s collection. Japan’s record stores are something else.

Chicken Bowels, though, proved elusive. I asked about this record at every shop I visited, but came up empty on both trips. Which got under my skin, because this record got its hooks into me. Even among the Japanese hardcore hall of fame that was Joel’s record collection, Chicken Bowels’ EP was unique. It didn’t sound like anything else. And since it came in 1987, way later than many of the hardest to find classics, and didn’t have the hype associated with the scene’s big names, I should have been able to find it.

Like Ahab, I had a few encounters with this white whale over the next two decades. I’ve had a saved eBay search for “Chicken Bowels” for that entire time, but I can’t recall ever seeing one up for sale. (Popsike tells a different story… there are nine eBay auctions for the EP archived there, but there hasn’t been one since 2013. Amazingly, though, two copies sold barely a week apart in the fall of 2006.) Whenever I heard a friend was visiting Japan, I always asked them to look for a copy for me (a strategy that proved effective for nabbing other elusive wants like Bastard’s Wind of Pain and the Aburadako flexi). At some point, I remember hearing that Joel had given his copy of the Chicken Bowels 7” to our friend Brandon as a wedding present. I got several great records from Brandon when he downsized his collection a few years after that, but I think I remember hearing that his copy of Chicken Bowels went to Mark from Beach Impediment, with whom it presumably still resides. I remember once someone on the Viva La Vinyl message board listed a copy for sale (I think it might have been Burkhard, who put together the Flex discography books). He didn’t name a price, so (if I remember correctly) I offered him $150, which at the time was consistent with what the EP had sold for on eBay and Discogs. He said the offer was way too low, and I guess he was right, because someone made him a better offer and he took it before I could counter. The white whale had escaped my grasp once again.

A few weeks ago I dropped in on the “items for sale in your want list” page on Discogs, as I am wont to do, and that garish red and yellow cover felt like it smacked me in the face. There was a problem, though: the record was in Australia, and it wasn’t available for purchase in the United States. I sprang to attention and sent the seller a message, explaining that I was happy to pay their asking price and whatever it cost to ship the record to the US. I expected nothing would come of it. If you spend a lot of time on Discogs, you know that the best records at the best prices disappear from the site in minutes. I thought for sure someone would buy the record before the seller responded to my message or before we worked out a deal. Luckily, though, the seller not only wrote back right away, but took down the listing to ensure no one else would buy it while we worked out the details. I tried to suppress my excitement, because there was still the lengthy waiting game of international shipping. While that process wasn’t without incident (the seller sent me the wrong tracking number, leading to a semi-freakout when I saw the record was delivered to a parcel locker in San Diego), the record showed up earlier this week.

You’d think that, with so much buildup, getting this EP in my hands would be unsatisfying, but that is not the case. Getting to pore over this artifact and blast it from my turntable reminded me how much I fucking love this weird ass little record.

I’ve never been able to dig up much information about Chicken Bowels, but here’s what I know. I believe they were from Hiroshima, and their drummer was Muka-Chin, whose name you might recognize since he played drums on most of Death Side’s records. Aside from their guitarist, Motsu, handling vocals in Half Years, I know little about the other members’ resumes. However, the Chicken Bowels EP was produced by Zigiyaku, a towering figure in the history of Japanese hardcore. Zigiyaku first came to prominence playing guitar in the legendary band Gudon, then formed Half Years, then Bastard, then Judgement. From what I understand, Zigiyaku was the main creative force behind those bands, and hence was one of the major figures who shaped what we now understand as the Japanese hardcore sound. It’s hard to tell how much of a hand he had in the Chicken Bowels record since a producer credit could mean just about anything, but there’s a certain magic to this recording that I suspect may have come from a sprinkling of Zigiyaku’s magic fairy dust.

Getting reacquainted with this EP this week, it struck me that every one of its six songs has at least one signature climactic moment. A band is lucky if they can capture a single moment like this on an entire record, but somehow Chicken Bowels got one into every track, and they’re all different. In the first track, “Keep Our Fire Burning,” it’s the striking, melodic bass line in the chorus, which always reminded me of funeral bells tolling, simultaneously melancholic and grandiose. On the second track, “You Live in Dream,” it’s the way the guitarist drops out of the riff on the chorus. “No Control” has one of the most epic guitar solos I’ve ever heard, played with all the melodic sophistication and creativity of a brilliant bebop jazz player. And there’s the entirety of “Fuckin’ Crime,” which ends the EP on a joyously snotty note that reminds me more of the Swanky’s light-hearted pogo punk than the heavier and grimmer sounds on the rest of the record.

And then there’s the record as an artifact. A big part of Japanese hardcore’s draw is that they do things I would never expect, and this EP is a perfect encapsulation of that aesthetic. There’s the band name… why on earth would you call your band Chicken Bowels? Perhaps it’s a significant phrase in Japanese language or culture, but to me it sounds delightfully absurd. And then there’s the record’s layout, which uses bright and striking colors that look more like a children’s toy than a hardcore record, the nutso cover illustration, and the idiosyncratic choice of typefaces. The lyrics are along the same lines… who knows what they sound like to a native Japanese speaker, but to me they are ludicrous, yet strangely evocative. From “Lie and Truth:”

From “You Live in Dream:”

Hurry up! No future

Go Down! Kill yourself!

Get out! Noisy crows

Make a fresh start of life

(Note: I’ve excluded part of the lyrics that are printed in Kanji since I don’t know how to type them.)

So, has this strange little record made me feel whole again? It has… if only a little. I’ve always been more of a gatherer than a hunter of records, preferring to enjoy the records that find me rather than chasing down wants with an obsessive zeal. When you lust after things, you build them up too much, and at some point the chase is better than the catch. Holding the Chicken Bowels EP in my hands, though, feels like coming home. It’s deepened my appreciation of a record I already loved, but also unlocked a sheaf of memories I’ve been happy to revisit here. Hopefully, I’ll continue to get a hit of that joy every time I take it off the shelf.